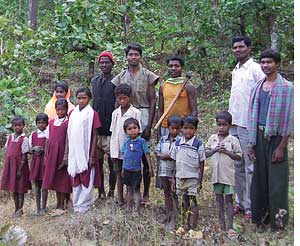 "In our parts people would often say, 'Will the forest ever disappear?' But before my eyes first the sinhar vines (camel's foot climber) disappeared, and then the bamboo. When even sal started disappearing, our people realized that the forest could well disappear, unless protected," said Nanki Bai, with a faraway look.

For hundreds of years, Baiga tribals living in 52 forest villages of the Baigachak region, spread over Samnapur, Karanjia and Bajag blocks of the Dindori district of Madhya Pradesh, had never consciously bothered to conserve forests. For this community of 30,000-35,000 people, it was the forest that protected people, not the other way round. Non-felling of sacred trees and rules about harvesting of forest products were ingrained as religious rituals rather than understood as conservation methods.

Then came forest officials.The department paid villagers to clear forests for commercially valuable sal plantations, and traders paid them to extract fruits like gooseberry (amla) and chaar or chiraunji, and medicinal herbs. "We were told the forests belonged to the government," said Nanki Bai, octogenarian matriarch of Pondi village.

With the disappearance of beneficial vines and herbs, the community began to grow impoverished. "We were getting increasingly dependent on the wages paid by the forest department and traders," said elderly Fagu Gholu Baiga of Ranjra village. The simmering discontent reached a head during the sal borer epidemic of 1995. According to forest department records, the epidemic destroyed one-third of the area's forests. The Baigas, however, tell a different story. "We were asked to cut healthy trees as well. Twice as many healthy trees were felled as infested ones," said Gondi Singh Rathuria of Ajgar village. "We had never seen felling on that huge scale." Protests flared up in many villages, but in most places they were easily suppressed.


The villagers became cautious. They began discussing the extent and causes of forest degradation. Soon they realized what loss disappearance of vines had caused. "Vines conserve moisture in the soil and air, provide hideouts to animals, make it difficult to fell trees by covering them, and most important, they make forests impenetrable," said Bir Singh Sarodia, an elder vaid (village doctor) of Ajgar, named after pythons found in the dense, vine-covered forests. Vines like sinhar, kaniyakand, geeth and kirchi provide fruits, seeds, fibre and tubers, a nutritious substitute for grain. Sinhar leaves are used in plate-making and roofing.

Disappearance of vines also led to the drying up of swamps in the region. Octogenarian Motilal Dhurve of Dhaba village, a renowned vaid in the region, said, "In my youth there were huge swamps at Agri Kachar, Rani Sagar and Bulluk Pani, and smaller swamps at other places. These swamps were reservoirs of important medicinal plants like tejraj, bhograj, kamraj, bada sukhra, hata jodi, aithi, telia kand, kali haldi, kali bhoolan, satvaar and musli. There was a cure for every ailment available here. I have seen these swamps dry up as the forests thinned." Of the 61 varieties of medicinal herbs once available in the region, only 10-12 are left, he said.

Other useful plants and trees like gooseberry, harra, surei, doomar, apple stone, mango and bamboo also nearly disappeared, so did some vegetables. "Ours were mixed forests," said Dhansingh Kusram, sarpanch of Serajhar. "There were about 50 varieties of large trees, of which just 23 are left. Of every 1,000 trees, 920 are now sal."

The next step was framing rules for conservation.

No felling of live trees or vines, no harvesting of forest produce until it is mature, patrolling to stop forest fires and pilferage. Traders were forbidden from bringing outside labourers and harvesting was done carefully by villagers, who also planted gooseberry, mango, bamboo and chaar in the forest.

The results were encouraging. Dhaba, Kanheri and Rajani Sarai villages saw their water bodies revive within three years of the conservation drive that star-ted in 12 villages in 2001-2002. Disappearing species are reported to be regenerating in patches of forest, totalling 3,200 hectares, protected by villagers. "We now find lac, chaar, tendu fruits, musli and kanda in jungles," said Charu Singh Nandia of Dhaba. It will take at least two decades of undisturbed protection for the forests to regain full health.

But disturbance there is. In the past few years, several villages have had a faceoff with forest officials over coupe felling--routine tree felling by the forest department to encourage regrowth that villagers say is more of a timber-extraction exercise. In Dhaba, some 4,000 trees were marked out for felling in 2004. When villagers demanded they be allowed to select trees for felling, the department brought labourers from Rajani Sarai, 25 km away. A revenue official intervened and 200 trees were felled. In Rajani Sarai, only half the marked trees were allowed to be felled last year. In Ranjra when the felling of 3,000 trees was announced in 2007, people objected. After long and tense negotiations, very few trees were allowed to be felled. "The timber came to half a truck," said Lalla Singh of Ranjra. Another conflict is on the cards. Ranjra residents report that in October-November 2008 officials quietly marked a coupe close by. Ajgar, Pondi, Chapra tola, Kandawani, Tumatola and Kanhar also reported clashes over felling.

Tyagi refuted trees were marked in excess, but when confronted with villagers' records, he first said the people must have been misguided by outsiders, then admitted "it is not possible to monitor the ground situation all the time".

"Whenever there is an altercation, officials ask us, 'Who is egging you on?' They do not want to admit it is our forest and our concern," said Fulwati Ningunia of Ranjra.


According to Anil Garg, a lawyer who has studied forest land records and coupe felling in the region, the department is continuing with the British way of forest management by concentrating on timber extraction. "The working plans of all districts of Madhya Pradesh have over the years referred to mixed forests as 'inferior forests'," he said. Officials admit their working plan has no provision for the protection of vines and other "inferior" species so crucial to biodiversity and the Baiga's livelihood. Except in a few biodiversity compartments, the working plan recommends destroying vines and "useless" bushes that obstruct the growth of sal and teak.

Villagers and forest officials also differ on the merits and methods of coupe felling. Officials say it is a scientific activity aimed at inducing growth in the forest and has nothing to do with timber extraction. "Felling is carried out using silvicultural methods and a detailed follow-up, including dressing of trunks to ensure regeneration," said Fulzele. The Baigas say coupe felling is highly damaging. "When a tree is felled, vines on it die. Falling trees crush herbs and seedlings. It disturbs birds and wildlife and forest regeneration is delayed. Trucks carting timber damage small plants," said Juglal Ningunia, sarpanch of Ranjra and head of its forest study group.

Villagers also contest the criteria for tree felling, one of them being a 120 cm girth for sal trees. According to officials, at this stage the tree stops growing and is no more useful. Villagers say sal trees, which reach this size in 25 years, live much longer. "Old trees shelter birds, vines and wildlife," said Lalla Singh of Ranjra. Sunil Bakshi, director of the forest department's human resource centre at Chhindwada and a botanist by training, said a sal tree lives for over 100 years but after it reaches the girth of 120 cm (35-40 years), its heartwood grows hollow, bringing down its timber value.

Afraid of backlash, the Baigas have not challenged coupe felling in toto, but insist that felling be done according to rules and in consultation with them.