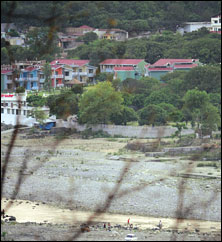 Animals are increasingly finding it difficult to move from the Corbett Tiger Reserve to the adjacent Ramnagar Forest Division in Uttarakhand. Reason: unregulated tourism along their route.

A study in December 2009 found 49 tourist resorts exist along the route, called the Kosi river corridor, and 12 more are under construction. All these are private resorts. In addition, 30 government rest houses are in and around the reserve. Together they occupy 1,228 sq km. Over the past five years, resorts have been built on land where mango and lychee trees grew, said a local guide who did not want to be named.

“Tourism in the park is not in sync with the conservation objectives of a critical tiger habitat,” said Prerna Singh Bindra, a freelance writer who prepared a report on the impact of tourism on wildlife in the reserve for the tourism ministry. She added only a few patches are left for animals to move around freely. But even the remaining patches are busy with safaris, on vehicles and elephants, said Harendra Singh Bargali, deputy director of the non-profit Corbett Foundation in Ramnagar.

The warden of the Corbett National Park, Umesh Chand Tiwari, did not agree that resorts blocked movement of animals. “The land on which resorts are constructed was never wildlife thoroughfare. Besides, the resorts are on revenue land and are free for any commercial activity,” Tiwari said.

He added the patches reserved for animal movement in the Kosi corridor were between Dhikuli and Garjia villages and Sundarkhal and Mohan villages (see map). The area beyond Mohan is reserved for animal movement, he said. But in Sundarkhal, with 400 families, villagers have fenced parts of the corridor to prevent animals. “Such villages need to be relocated immediately. With time the encroachment will increase and resettling people will become more difficult,” Bargali said.

It is not just resorts and encroachment that restrict animal movement. The resorts generate air pollution, noise and waste. The December 2009 study, which the tourism ministry had commissioned to the Institute of Hotel Management in Delhi, found 250 to 300 vehicles operate in the area daily during the peak season, April to June. The vehicles ply on a 27-km road, which passes through the corridor. The study also found that more than 60 per cent of the private resorts do not segregate waste. 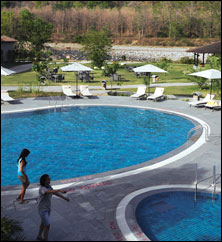 “Resort owners claim they dispose of waste properly, but we found that most hotels dumped waste in any vacant space available,” said R K Gupta, senior lecturer at the institute. Resorts dispose of chemically treated water from swimming pools into the Kosi, he added.

Besides, 70 per cent of the resorts organize weddings and parties in the open, with loud music, heavy lighting and noisy generators. Resort managers claimed they operate in sync with nature. “Parties are rare,” said Yashwant Singh Bisht, general manager of Wood Castle, a resort on five hectares in Dhikuli.

Aside from pollution, the number of hotels has hiked land prices in the area. For example, the price of one acre (0.4 ha) in Dhikuli village is Rs 2 crore—10 years ago its price was around Rs 20 lakh per acre.

Tiwari agreed safaris threatened animal movement to an extent, as did pollution and noise. “Strong lighting at night discourages animals from emerging from their territory and drink water from the Kosi river,” he said.

Tiwari says he is helpless: the district administration should check such activities, not the forest department. The Kosi corridor is under the National Highways Authority of India, not the forest department. Therefore, controlling vehicular traffic is not under its jurisdiction. He said management within the park, which gets 200,000 visitors annually, was the department’s responsibility.

But there are problems here as well. For example, littering, smoking, drinking alcohol and getting off a vehicle during a safari are prohibited but the rules are not followed.

The park does not have enough manpower to check these activities as per Tiwari, but they do sometimes fine violators. Financial constraints are there because all the money the park earns is deposited with the state treasury. “We have proposed to the state government that it sets up a reserve fund for the park’s development. If the proposal is accepted, the money collected for entry to the park would go to the fund,” said Tiwari. Entry into the park for foreigners costs Rs 950 during the day and Rs 2,400 at night; for Indians it is Rs 300 and Rs 700. 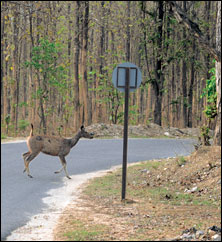 Officials of the Union environment ministry agreed tourism can be used to develop protected areas. They are working on guidelines to promote ecotourism as per the carrying capacity of the tiger reserve. Tourism in the core areas of all the 39 tiger reserves in the country would be strictly regulated, the ministry’s press release said on May 4.

Bargali said different departments should, on a common platform, think of a strategy to ensure checks. “No parameter exists on the distance of a resort from the park. By the time we will have legal provisions, it will be too late,” he said. Rajesh Gopal, member secretary of the National Tiger Conservation Authority, said tourism activities should be gradually phased out from the core areas of the reserve and shifted to buffer zones. “Corridors are a must for the free movement of animals, else man-animal conflicts would increase,” he warned.