Tribals in a trap

Tribals in a trap 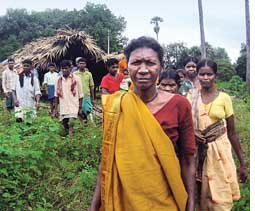 Caught between the state and Maoists, people are the casualty

"Freedom?" old Muchaki Tamayiah looks confused for a moment. "It means nothing to us. All we know of freedom is what you are describing to us," he chuckles. Other villagers sitting around grin in shared amusement. It's August 15 and I'm at Nendra, a remote Dorla adivasi village in the forests of Chhattisgarh's Dantewada district. So removed from mainstream India is Nendra that the villagers only know of Independence Day as the "day the school teacher usually comes and unfurls a flag". And that hasn't happened for years now.

Once a well-established village with 140 houses, Nendra has repeatedly borne the brunt of the protracted Salwa Judum-Naxalite conflict that has ravaged the Bastar region since 2005.Villagers say in the past three years Salwa Judum cadres and security forces have attacked Nendra three times--killing nine children and 16 adults, burning homes and destroying property--all because they refused to join forces with the state-backed anti-Naxalite movement. "When they first came (in March 2006), we ran away and hid in the forests. When we came back everything was gone," says Muchaki Dula, whose teenage daughter, Muchaki Raje, has been missing since. The state, however, claims the villagers were Naxal supporters and hence brought violence upon themselves. Whatever the case, flushed out of their homes most villagers fled to neighbouring Andhra Pradesh (about 20 km away), others hid away in the forests or accepted the Judum's diktat and moved into one of the many roadside relief camps set up by the state government.

For three years, Nendra's fields lay fallow and its cattle roamed wild. Now, in a unique effort to encourage tribals to return to their villages, local civil rights activists have planted "human shields" --a group of six to seven young men and women volunteers--who have been living in Nendra since June, offering the adivasis moral support to pick up the threads of their lives again.

Nendra is coming alive, bit-by-bit. Twenty-two villagers have returned, cautiously. A few others, still nervous at the prospect, venture out of their forest hideouts during the day to till their land. Homes are being rebuilt. Nine new huts stand in the village now, roofs covered with bright plastic sheets. Meals of daal, vegetables and rice are cooked in one communal kitchen. "So far, we've tilled about 16 hectares (ha) by plough and another 32 ha or so by tractor (provided by Vanvasi Chetna Ashram, a local non-profit organization spearheading this effort along with Action Aid)," says Uday Nag, a young human shield volunteer from Dantewada town. "We plan to grow paddy, maize and vegetables." Villagers are still wary of going to the local haat at the Errabore relief camp eight km away and facing the wrath of special police officers (spos), state recruits from Salwa Judum activists. "It will take time to build their confidence," says Himanshu Kumar, who runs Vanvasi Chetna Ashram. "We would like the government to restart the school and anganwadi and provide healthcare. If Nendra is a success, other villages will follow suit."


Along National Highway 221, at Errabore relief camp, spos and police personnel welcomed August 15 by firing shots in the air, raising the tricolour and blaring Hindi music from a loudspeaker in front of the camp thana. But the celebrations couldn't allay their sense of being trapped.

"We can never go back," says Ismael Khan, a young spo from a nearby village, barely able to control his frustration. "All our property, our homes, we aren't ever going to get them back. Either way, whether we stay or we leave, we'll have to die."

Since it was launched in June 2005, the Salwa Judum (Purification Hunt in Gondi) offensive, which the state describes as a spontaneous uprising by local tribals against Naxal oppression that they later lent support to, and resultant Maoist retaliation has cost over 700 lives, emptied out about 644 adivasi villages and displaced over 150,000 tribals caught in the crossfire, according to official figures. Activists say the actual scale of displacement is about 350,000. Many of these tribals now live in the 26 relief camps the state government has set up along roadsides or in settlements in Andhra Pradesh. They survive mostly on government rations and occasionally work as daily wagers under rural employment schemes or in Andhra farmers' fields.

At Errabore, camp residents, who still number over 4,000, complain of government neglect, delayed rations and unhealthy living conditions. Yet few are willing to leave. Those from nearby villages visit their fields and sometimes stay over at their homes for days, but continue to retain their camp quarters. It's a pattern that's being repeated in most camps across the Bastar region. There is a sort of two-steps-ahead, one-step-back movement towards the villages. A lull in violence and people move to the villages. An incidence of violence, they move back to the camps or hide in forests.

Officials say there are still over 40,000 people living at the camps. But the numbers keep changing. "They will end up keeping these places as second homes because they have seen the benefits of living in the camps, close to security forces, markets and schools," predicts Dantewada police superintendent Rahul Sharma. Part of the movement back to the villages is also because the Naxals have changed their earlier threatening stance with the tribals, Sharma says. "Now they are telling villagers to come back. They haven't been able to break Salwa Judum and they've realized that they can't afford to alienate thousands of tribals."

While Sharma is appreciative of the Nendra initiative, and hopes there'll be more similar efforts, his superior in Raipur, director general of police Vishwa Ranjan, calls the rehabilitation effort "utter nonsense". "It's just big talk by Himanshu (Kumar)," he says. "People there had run away from the conflict, now because there's a police post at Errabore they feel it's safe to go back. Wherever there's police presence, people are returning on their own." In the same breath though, the police chief labels Nendra a "Naxalite village" where forces recently arrested two teenage Maoists in an encounter.


Fact is, Chhattsigarh's BJP government and New Delhi's Congress coalition are scrambling to justify precipitating a humanitarian crisis by arming adivasis, including underage children, to fight Naxalites. Salwa Judum has faced increasing criticism from national and international human rights organizations that say the movement's human rights abuses have led to a civil war-like situation in the Bastar region and has actually benefited the Naxal movement by alienating the tribals further from the state (Naxal presence in Bastar has increased from what in 2005 used to be one military troop to 22 today, police officials themselves admit. And they have spread to areas like Bailadila and Lohandiguda, which four years ago were considered "clean" zones).

Censure has also come from government bodies and the judiciary. In March 2008, while hearing two petitions to disband Salwa Judum, the Supreme Court noted that it was unconstitutional and illegal to "give arms to somebody and allow him to kill" and that this could make the state an "an abettor of the offence under Section 302 of the Indian Penal Code". The court directed the National Human Rights Commission to send a fact-finding mission to Bastar and submit a report. In May, a Planning Commission report said the vigilante campaign was "an abdication of the state itself" and called for its immediate scrapping.

But with elections due in November, both the Congress and the BJP would rather push the matter under the carpet for now. Judum marches through villages to recruit members and garner support have been put on hold, apparently because the police is busy concentrating its forces on hunting Maoists in the forests and can't provide the marchers the security required.

Chhattisgarh opposition leader Mahendra Karma, who's credited with leading the Judum, is candid "All political forces associated with this movement are now more focused on the elections. Post-polls, no matter if I win or lose, I'll restart the andolan on a big scale," he says. Karma admits that some Judum members "might have done something bad in the heat of the moment," but doesn't accept that the entire movement can be wrong.

The Congress mla, who's being cold-shouldered by the Raman Singh government that was earlier only too happy to support his "citizen-led" militia, now says all incidents of violence attributed to Salwa Judum were actually perpetrated by police and paramilitary forces. "Salwa Judum has never been a violent movement, it's only been publicized as such."

The other line of defence that both politicians and senior police officials offer is that all the highly publicized reports of human rights abuses by Judum members and security personnel over the past three years are part of an elaborate, sophisticated web of propaganda the Naxalites have unleashed against the movement.

Ranjan refers to a 2006 April Maoist politburo meeting where the Naxals declared that "the scale and magnitude of the enemy's military onslaught unleashed in the name of Salwa Judum is unprecedented in the history of the Indian revolution after the setback of 1972." At the meeting, Naxal leaders called for a multi-pronged effort to "isolate the main enemy," including launching a propaganda website and calling on international fact-finding and medical teams (a copy of the meeting's resolution is with Down To Earth).

"You will find that it's right after this that a number of ngos and human rights bodies came here and criticized Salwa Judum but didn't have much to say about years of Maoist oppression," he says. The police chief dismisses fact-finding reports by independent groups saying the investigators were guided by pro-Left informants. If there have been so many unlawful incidents, why haven't people complained to the police, he asks.

But he fails to note that most of these incidents take place in remote villages where state and police presence is practically non-existent. Like the village of Arnampalli in Dantewada, which in the monsoon, takes at least a three-hour trek through forests to get to.


I went to Arnampalli after coming across a hand-written, hand-delivered letter from Naxalites stating that the three "uniformed Naxals" police shot in an "encounter" on August 11 were not Maoists but regular villagers. Villagers too corroborated what the letter said. They said when security forces approached the village early in the morning some villagers were collecting wood near the forests. On seeing the armed men, the villagers tried to run away and that's when they were shot. "They must have put uniforms on the bodies after they took them away," says Mandvi Budri whose husband, Mandvi Joga, was killed in the incident.

In Raipur, Ranjan promptly responds saying he has a copy of "another letter from the Naxals, a printout, that acknowledges those killed on August 11 as Maoist saheeds".

The police chief points out that, when caught between the crossfire of two opposing groups, truth is the casualty. Yet somehow, this very fact is something neither he nor state leaders are willing to acknowledge in context of the Judum-Naxal conflict. Which is probably why Bastar continues to be a confused battleground where ordinary adivasis serve as cannon fodder for both Maoists and the state.