Industry flouts weak regulations at will 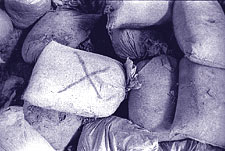 MIC remains in use in India. And for the same pesticide that UCIL manufactured here -- Carbaryl. MIC is primarily used in producing pesticides, pharmaceuticals, polyurethane foams and plastics. Production of polyurethane chemicals in India was estimated to have been more than 100,000 tonnes in 2001 A scientist associated with the industry says, "We know what MIC did. But, we do not know what more than 80,000 other chemicals are doing to us everyday." Also there are no official figures on how much MIC was used. This is because the Insecticides Act, 1968 does not mandate declaration of the hundreds of chemicals (like MIC) that are used to manufacture an insecticide. Also, the process of testing the final product tested before it is registered is hardly fool-proof. With a turnover of Rs 1,200 billion plus in 2001-02 and an average growth rate of above eight per cent, the Indian chemical industry is one of the fastest growing sectors of the economy. It received a boost after the liberalisation programme of the early 1990s. The industry's growth rate has been more than twice the overall Asian rate and is one of the highest in the world. It accounted for more than 16.2 per cent of the total exports from India in 2001-02.

After liberalisation there have been major investments in the industry. "Chemicals were introduced without assessing their impacts," says Deshmukh. Even more dangerous is the trend of large-scale industries outsourcing various chemicals and intermediates to small industries. "With absolutely no environment management systems, these 'backyard' factories have become a major menace," says Dilip Biswas, former chairperson of the Central Pollution Control Board. "Accidents in such units are very common," he adds.


After the 1984 gas leak, a number of regulations and rules were enacted to stymie the kind of pollution Bhopal was witness to. In 1986 came the Environment (Protection) Act. The Factories Act of 1948 was amended in 1987 to introduce provisions related to the hazardous industrial processes. The manufacture, storage and import of hazardous chemicals rules were enacted in 1989 to deal with accidents from industrial activities involving hazardous chemicals. The Public Liability Insurance Act of 1991 aims to provide immediate relief to persons affected by accidents involving hazardous substances. Large industries need to get an Environmental Impact Assessment done before the government gives them consent to function. But, enforcing these laws remains a major problem. "The government lacks the motivation to make the industry fall in line. They openly the flout the norms knowing very well that they can bribe anyone," says Waghle.


While India paid short shrift to Bhopal, the US beefed up its regulatory mechanism. In 1986, it set up a fund called Superfund. Under it the liability for cleaning up a contaminated site rests with the offending corporation. Failure in adhering to this regulation means that government can clean up the premise and extract three times more money. The Tomas Mac Sheoin report of 1986 on the Union Carbide Corporation notes, "It is bitter irony that the major reformist effects of Bhopal were felt in Union Carbide's home country."

In 1986, the US introduced the Toxic Release Inventory system where every hazardous substance was accounted for by a regulator and the user company. Stricter monitoring standards were introduced and many compounds were reviewed for safety standards. Within five years, at least 70 chemical plants were relocated to safer areas and several suspended operations. Since policy and regulators move slowly in India, many of them shifted here.

And regulating the chemical industry in India is a major problem. With the chemical industry growing fast, safe guarding environment and public health will require great efforts. "What will help is raising the value of a Indian life," avers Dhara. "Today it is much cheaper to kill hundreds of Indians then to put in place control systems. In India the maximum dole under the Public Liability Insurance Act is Rs 37,500. In the US one life is worth a million dollars," he says. "If the costs of accidents are made more than that of technology and control systems, the industry will obviously opt for the cheaper option. This model has worked in the West and will work for us too," he adds.