The Ganga Mukti Andolan is endeavouring to free a stretch of the Ganga -- and the exploited fisherfolk that derive their livelihood from it -- from the clutches of landowners and mafia gangs. 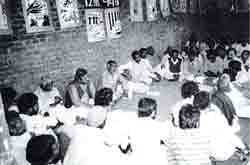 FREEING a river from bondage might seem preposterous. But that is exactly what the Ganga Mukti Andolan (GMA) set out to do in 1982 in Bihar's Bhagalpur district by mobilising fisherfolk, peasants and boatpersons against the infamous panidari -- the exclusive rights of zamindars (landowners) to fish and run boats -- over an 80 km stretch from Sultanganj to Pirpainti.

The GMA attained a major victory in 1991, when the Bihar government abolished panidari. But the victory has also posed new organisational challenges for the GMA. And, with the growing ecological degradation of the river and its banks, life hasn't become any easier for the fishing community.

Panidari has flourished over this stretch of the Ganga from the times of the Mughals, and it continued even after zamindari was abolished in 1954 in the rest of the country. The stretch was divided into two strips -- each under one zamindar -- and contracted out. The contractors leased out the river to individual fish workers, collecting Rs 700 to Rs 2,000 from each person annually. The region's many criminal gangs also extracted money from the fisherfolk and often took away their boats and nets.

Eleven years ago, GMA, under the banner of Jal Shramik Sammelan, started a movement against exploitation of the fisherfolk. The protest soon spread to large parts of Bhagalpur district. Apart from the abolition of panidari, the protestors sought a ban on using cloth nets and killing of spawn. GMA activists, many of them local fisherfolk, also felt the Farakka barrage should be demolished as it had caused siltation, leading to a sharp decline of fish such as hilsa. Other demands included closure of various factories that pollute the river.

During the first eight years of its struggle, GMA organised various marches, dharnas and meetings. Every year on its birth anniversary, February 22, GMA would organise a festival at Kagzi Tola in Kehalgaon, to make the people aware of the problems faced by the fishing community. The festival continues till today.

Finally, the Bihar government abolished panidari in 1991. But some of the earlier unresolved issues and some new ones seriously threaten the further success of the GMA campaign.

A major setback is the sharp decline of fish. Says Parvati Devi, a GMA activist from Kagzi Tola's fishing community, "Zamindari was abolished, but we didn't concretely gain because the number of fish has declined drastically and criminalisation in the area has increased sharply."


Says Ram Kishore, another GMA activist from the Diara (flood plains) region, "The number of fish has declined by nearly 75 per cent in a decade." Adds Sirpati Sahni, a Kagzi Tola fisherperson, "We now get only 2-4 kg fish a day, and the expensive and big varieties of fish have just disappeared."

The decreasing number of fish has been a direct outcome of siltation and destruction of the river's micro-ecosystem caused by injurious fishing practices and the increasing pollution of the Ganga.

According to K S Bilgrami, head of Bhagalpur University's botany department, who has done pioneering work on Ganga pollution, the breeding of saline water species like hilsa, jhinga ariya and guari, which move up the river to spawn, has been adversely affected due to silting up of the fish ladder at the Farakka barrage. Siltation also raises the upstream river bed, causing heavy floods every year during the monsoons, right from Mokamma to Murshidabad, and is fast depleting the river's 300 varieties of algae, a major fish food.

The dwindling number of fish, especially the big varieties, has triggered a struggle for survival among fisherfolk, in which even the smallest of fish are not spared. Use of cloth nets, though legally banned, is rampant and further destroys spawn. Yogendra, a schoolteacher and GMA associate, says spawn is taken out at 16 places in the region, often by zamindars for their private ponds. Almost 90 per cent is destroyed en route. "But even the remainder is highly profitable and the whole system is well-organised, with the railways having made special transportation arrangements," says Ram Saran, another GMA activist.

Bilgrami has found that 55 different types of nets are used by the fisherfolk. He recommends cotton or jute nets because thin nylon nets injure fish, especially catfish. But Raj Kumar, a Kehalgaon fisherperson, says, "All our nets to catch big fish, which cost about Rs 3,500 each, are lying waste because there are no fish. We are forced to use thin nylon nets, so that we can net the small fish, but even their numbers are dwindling." This has led to the use of cloth nets.
Bilgrami, who recently surveyed the Ganga from Munger to Kehalgaon, says, "The tributaries of the Ganga, rich in fish, are often leased out. The fisherfolk harvest juvenile fish weighing 15 gms, though they can attain 3 kg in two years if allowed to reach the main river. The fish are caught and sold in heaps. Even gravid (pregnant) fish, which contain at least 200-300 eggs each, are killed. These practices have to stop."

Heavy pollution has lowered the level of dissolved oxygen in the river, and destroyed algae and plankton, affecting the entire food chain of the fish. Bilgrami, along with J S Dutta Munshi, identified in a 1985 report four factories, concentrated in the Mokamma region, which severely pollute the Ganga over the 256 km stretch from Barauni to Farakka. The Bata shoe factory and the McDowell distillery discharge 250,000 litres of dirty water into the river daily. Experiments showed that fish exposed to the water in the Bata region died within 48 hours, while in the McDowell area they survived only five hours.

Another major pollutant is the petrochemical factory, effluents and oil spills from which caused a big fire in the Ganga in 1968. Yet another culprit is a liquor factory, Shiv Shankar Chemical Industries, in Jagadishpur block of the Banka region, against which the GMA has taken up cudgels (See box).

A major GMA demand is that the river ghats be made free for crossing. Though technically there's no restriction on crossing the Ganga, certain portions -- called public ghats -- covering an area of 2-3 km, have been demarcated for ferry crossings that are taxed. The ghats are auctioned by the government and leased to contractors who fix toll rates much higher than the official rates. The Bhagalpur station ferry, with three big ghats in its 32-km domain, has remained with zamindar Bhaggu Singh's family for nearly a century. Bhaggu Singh is dead, but the ferry is still controlled by his grandson, Ratnesh Narain Singh.

The poor people, who eke out a living by crossing the river to sell vegetables and foodgrains, are grossly overcharged. At Adampur ghat, for instance, passengers pay Rs 4 for a steamer crossing, against the official rate of Rs 2.40. Similarly, Rs 3 is charged for a basket of bananas, while the official toll is 36 paise. And Singh's henchmen beat up people unloading boats away from the public ghats. Though the district magistrate exempted the Shankarpur Diara from the toll, Ratnesh got a high court order rescinding the exemption. But the people of the Diara continue to struggle.

Another source of corruption is the fishing cooperatives, where criminals and zamindars, hand-in-glove with the office-bearers and exploit the fisherfolk. While fishing in the main river is now free, many of the river's tributaries are leased from the state by fishing cooperatives at very low prices. Then high amounts are extracted from the fisherfolk for using these tributaries, where, the GMA demands, fishing should be free.

The mafia gangs collect monthly amounts from the fisherfolk. Madan Singh, a gang leader in the Sahebganj belt, allegedly collects Rs 25 a month from every fisherperson. Says GMA activist Ram Kishore, "Though zamindari was abolished in 1991, criminals have become zamindars in many places, collecting arbitrary taxes." Says Bhagalpur district magistrate Arun Singh, "The distinction between criminals and non-criminals has really thinned down in the Ganga belt."


Meanwhile, identity cards are being issued by the state to the fisherfolk to lessen their exploitation, but these also entail problems. They are issued only through cooperatives, and hence restricted to members only. And getting membership, too, entails exploitation. Further, the system, which is confined to traditional fisherfolk, imposes area restrictions. Kharuddin of Rajmahal says, "There is no fish in Rajmahal and we often have to come up to Kehalgaon to catch fish, which we can't under this system." The people of Kagzi Tola have refused to accept the cards till the area restrictions and block demarcations are removed.

Though the GMA has grown and diversified, it has no definite organisational structure, but many mass fronts, operating at different levels. A Diara Jagran Samiti addresses the problems of the Diara region; the Navik Sangharsh Samiti works with the boatpersons and Bhagalpur has an organisation for slum-dwellers. The GMA realises that the problems of the poor are inter-related, and have to be fought together, but perhaps this has been its undoing, too, because it has meant that their energies have got diversified.


Assessing the movement, Sunil Chaudhury, a GMA sympathiser who teaches biology in Bhagalpur University, says, "GMA is no less significant than the Chipko movement. The honesty of its workers and its rapport with the fisherfolk is excellent. It has no big leader or spokesperson; ordinary, common people lead it. But its biggest limitation is its lack of focus. The movement needs a definite direction if it is not to wither away. The lack of any kind of documentation centre regarding the course of the movement is another major limitation."

Bilgrami adds, "GMA's people behave more like trade unionists and less like ecologists. There's no good ecologist in their team. The movement from the very beginning appeared to be a fight between zamindars and the common people. Actually, the movement should have been directed at conservation, of fish as well as the Ganga."

But the GMA movement hasn't been a total failure. Even while social problems and alcoholism remain, the once rampant physical and sexual abuse of women has almost disappeared. The GMA has also realised the importance of ecological issues and is reactivating its anti-pollution and anti-Farakka campaigns. But more than anything else, it has remained a people's movement, and has instilled confidence in hundreds of exploited poor people. Says a fisherperson activist, "A decade ago, the Ganga used to make a lot of noise. Now it has become absolutely quiet. We have to make it noisy again if we want to survive."