A nondescript Maria Gond village in Maharashtra's Gadchiroli district, can offer a lesson to urbanites on how to run a functioning democracy. 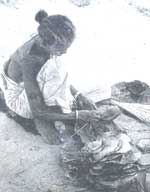 "MAVA NATE Mava Raj" (our government in our village) is the slogan Sarvodaya workers raised at a 1988 meeting in Maharashtra's Gadchiroli district, to educate people about village democracy. After the slogan-shouting, an old, "illiterate" Maria Gond adivasi, clad in a loin-cloth, stunned the Sarvodaya workers by asking, "You people say that in our villages, it is our government. Then whose governments are the ones in Delhi and Bombay?" The workers had no answer and the old man then told them, "The governments in Delhi and Bombay are ours because we elect them. But in our villages, we do not have a government. We are the government."

Though the bureaucrat has always considered the Maria Gonds a "most backward and primitive tribe", the fact is that these adivasis have a better understanding of democracy than most urban-dwellers. However, when the adivasis tried to exercise their democratic rights and sought funds for various village development schemes, they were told that because their gram sabha (village assembly), of which every adult Mendha villager was a member, did not enjoy legal status, they could not be given funds. So, taking a tip from government manuals, they registered themselves, under the Societies Registration Act of 1860, as the "Village Planning and Development Council of Mendha". As this council now undertakes all development work in the village, it is eligible for both government and non-governmental funds.

At first sight, Mendha looks just like any other nondescript Maria Gond village in Gadchiroli, with kuccha houses on either side of small plots of paddy. It is a small village, with just over 60 households and a population of 350. Adjacent to the village is a 1,600 ha forest, rich with many indigenous species like kusum (Schleichera oleosa), tendu (Diospyros melanoxylon), mahua (Madhuca indica) and other shrubs and herbs that the villagers used many decades ago for food, fodder, fuel and medicine. In those days, they kept a careful watch over the forest and Sitaram Atla, a Mendha villager, explained why. "We kept an eye on the forest so that we could make use of all the gifts it gave us. No one could selfishly exploit it".

But, since shortly after Independence, the forest has been under contractor and forest department raj, and it now shows signs of wear and tear. Though the forest is not barren, it is definitely degraded and the villagers know the reason why. Said Atla, "We lost control of our forest. Forest officials made our forest their own and we helped them destroy it. A major reason for this was that we let our community spirit flag."

To make matters worse, the abolition of the zamindari system in 1951 and the centralisation of resource control resulted in the Gonds losing their nistar (traditional rights) over water and land resources. With outsiders dictating who could enter the forest, the symbiotic relationship between Gonds and the forest snapped.

In 1989, the government issued a notification making the forest reserved land. This was the last straw and the villagers responded with a "jungle satyagraha" and a Chipko-style protest to prevent forest department personnel from working in the forest. Rukmabai, an active participant, recalled the struggle, "We did not allow forest officials to enter the forest because they had no right to do so. People know what their rights and duties are in the forest. We will not let outsiders steal. It belongs to us and we will look after it".

Now, villagers keep an eye on the forest to prevent illegal felling and cattle-grazing. Though the forest is still degraded, there is renewed activity such as marketing of tendu leaves, which are plucked, stacked and bundled in village homes for sale along the riverbank, just a short distance from the village. Also on sale are other forest products, such as lac and bamboo.

The gram sabha has also drawn up a list of tasks to be done by mobilising local labour. They include building bunds to prevent soil and wind erosion, land-levelling, building small check-dams to capture runoff water, constructing lift irrigation systems and planting local tree varieties on field boundaries. Mendha is yet to get financial assistance to carry out any of these schemes. Though meetings have taken place with heads of various government departments, so far there has been no tangible response.

The villagers specifically selected the Shram Shakti Dwara Gram Vikas, a development programme using voluntary community labour, because it is the first government initiative in Maharashtra to recognise the gram sabha officially as a unit for both rural development planning and implementation."We opted for this scheme because it allows us to decide our own future," explained one of the villagers, Devaji Tofa. But even though the Mendha gram sabha completed all the official formalities back in January 1991, it has not received any money yet under the scheme.

The villagers of Mendha have learned over the last few years to stand on their own feet to protect their environment. If now they start looking to the Maharashtra government for help, they may yet learn the meaning of disillusionment.