Settling nomads is tricky business, especially when it comes to garnering votes 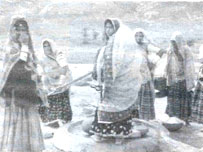 THE low hum of conversation suddenly gives way to melody as the Banjara women break into song. A voice yells, "Don't sing, shout slogans!" and the air is rent with cries of "Yeh azadi jhooti hai" (This independence is a sham). This was the scene in front of the District Magistrate's residence in Alwar, Rajasthan on October 1, 1994, where 300 former nomads had gathered, demanding voting rights.

Mir Singh, a gaunt 65-year-old Banjara says caustically, "Voting is for people above 18. I'm still a 2-month-old infant at my mother's breast." Adds Ratan Katyayani, general secretary of the Mukti Dhara Sansthan, a Viratnagar-based NGO under whose banner the people have gathered, "Look at this picture of independent India. Nobody here knows how to read or write. And merely because nomads have no permanent address, no house number, they cannot fill in the forms. They have so far even been denied the right to vote."

The Mukti Dhara Sansthan (MDS) has, since 1989, been engaged in settling nomadic communities permanently. Thirty-two settlements have been made across 4 districts of Rajasthan. According to Katyayani, although the government of India had issued orders for drawing up voters' lists between August 24 and October 7, as of October 1, no move had been made to accommodate these new settlers. Manohar Kant, deputy magistrate, Alwar, bluntly denies the allegation, saying, "Katyayani is lying. Some names have already been included. Where they haven't, enumerators will do so by the 7th."

Problems abound. Says Radheshyam, the only literate person in Vir Bhagat Singh basti, an 18-month-old settlement of 60 Gujarati Banjaniya Nat families near Bhratrihari, "Settling down is like a new birth for us. But problems lurk behind the joy." No settlement has medical or educational facilities. Radheshyam speaks of how in summer, people drank water from the mucky ponds in which buffaloes from nearby villages wallowed.

Most settlers have no steady source of income. Due to the onslaught of modernisation, the erstwhile nomads hardly find markets for their traditional occupations. Earlier, the acrobatic Nats performed for kings and landlords in return for rich rewards.

The MDS plans to start income-generating programmes among the tribals. But, according to Ratan, a wizened old man from Vir Bhagat Singh Basti, they have been on the anvil for some time now. "First, we were to set up bangle shops. Then, we were to get sewing machines. Now, we've been told that we'll be taught to make jholas (cloth bags)." Lacking alternatives, some former nomads like the Gadulia lohars and the Saperas still rely on their traditional occupations for sustenance.

Katyayani, a practising lawyer, admits that all the settlements are encroachments on siwai chak lands -- unassessed, unclaimed revenue lands. According to him, the Sansthan ensures that land found suitable is not disputed. The Vir Bhagat Singh Basti is, nevertheless, enmeshed in a controversy with the authorities of the Sariska National Park, saying that it lies within the park. The settlers and the Sansthan claim otherwise. According to Kant, some settlements are on pasture lands of adjacent villages and those villagers have sought his assistance in evicting the settlers.

Relations with neighbours are far from neighbourly. The nomads are generally considered inveterate thieves and troublemakers. At Kishori, a visibly upset Gerraj complained that donkeys let loose in his fields from adjoining Banjara bastis had ruined his crops. For her part, Sayar, a young Banjara woman from the 6-month-old settlement at Gopalpura, near Kishori, alleges that residents from neighbouring villages are pressuring them into moving out. "We might die here, but we won't move," she asserts.

The 4-year-old Banjara settlement adjoining Bamanvas village is cheerfully colourful, with it's lush green fields of bajra and jowar in vivid contrast to the barren Aravallis looming in the background. Mamraj, the energetic young community leader of the basti, explains the role of the MDS: "What do we know of policemen or government? We follow different rules. We need an outsider to help us."

While intra-community problems are sorted out amongst themselves, the people are entirely dependent upon Katyayani for all inter-community conflicts. Thus the people themselves decided that each family would cultivate 5 bighas (1.4 ha) of land. But when Bamanvas villagers began defecating in and around their well so that it could not be used, they turned to Katyayani for help, who led them to a gherao of the district collector. A handpump was soon sanctioned.

Despite the overwhelming odds, the settled nomads are staying put. As Mamraj says,"Who would want to go back to being a nomad? That was a dog's life." Adds a smiling, toothless Bhori, 75, the oldest woman at the Bamanvas basti, "In my days, children were born under trees and mothers had merely to pick them up and move on. Today, children are born with a roof over their heads."