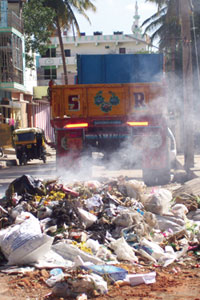 On October 1 this year, the garden city of India was chock-a-block with hoardings and newspaper advertisements announcing the Bengaluru civic body’s decision to make segregation of waste at source mandatory. For once, the Bruhat Bangalore Mahanagara Palike (BBMP), the Karnataka State Pollution Control Board (KSPCB) and the city’s administrators were singing the same tune. Plans were in the air—segregation would lead to scientific disposal of waste, farmers would get organic compost at subsidised rate, landfill sites could be used to build waste-based power plants. After all, the decision was a step towards ameliorating the decade-old suffering of people living in villages close to Mavallipura, Mandur and Dodaballapur landfills.

But the events that followed proved the announcement was hogwash. BBMP continued dumping waste without segregating it at the landfills. For years people have been protesting this, but BBMP has ignored them.

With the segregation agenda getting nowhere, the city streets are piled with uncollected waste. Unpaid manual garbage collectors have threatened to go on strike. The country’s hub of information technology appears on the brink of an all-out war over garbage.

On July 11, KSPCB chairperson A S Sadashivaiah had ordered closure of Mavallipura landfill because of non-compliance of norms by its operator M/s Ramky and absence of authorisation as per the Municipal Solid Waste Management Rules 2000. KSPCB had also ordered Ramky to scientifically process the 40 lakh tonnes of waste accumulated in the landfill within three months. Acting against KSPCB’s order, on August 23, BBMP deployed 600 police personnel to open the dump amid bitter protests. In the melee, one person died of heart attack. Later, Vaman N Acharya was given charge as KSPCB chairperson who withdrew the closure order at the behest of Chief Minister Jagdeesh Shettar.

Responding to a public interest petition, the Karnataka High Court ordered closure of the landfill and instructed BBMP to immediately implement segregation at source and penalise any non-compliance. Residents of Mavallipura and 12 other villages close-by have vowed not to allow any more garbage to be dumped in the landfill. On November 6, the court rapped BBMP for allowing a dump to come up at Mavallipura. It was argued that the dump had caused 11 bird hits at the Yellahanka air base. Following the Mavallipura incident, citizens groups closed the Mandur and Dodaballapur landfills as well. After hectic negotiations and assurances from city administrators, Mandur residents allowed BBMP to dump unsegregated waste till October 1. This was extended till October 15. Mandur witnessed protests once again on October 17 as residents of 15 villages took up the cudgels against trucks bringing in garbage.

On October 21, under heavy police deployment and in the presence of state health minister Aravind Limbavali, BBMP officials extracted consent for a three-month dumping extension from residents.

“There were so many police personnel and bigwigs, we had no choice but to relent,” says Mahesh, resident of Mandur. They were told that organic sprays would be used to reduce stench and flies, and stagnant leachate in the nullahs would be sucked out. “Toxic leachate still leaks into our lakes and fields,” says Srinivas, panchayat member from Mavallipura. Reduction in stench is minimal.

No implementation of court order

BBMP officials refused to comment when asked why Ramky and other errant operators were not penalised. The new KSPCB chairperson blames the inaction on the present turmoil in the city. “This is an emergency situation. If we penalise anyone now, the entire system will collapse. We will do it after the situation cools down,” says Acharya.

People and non-profits disagree. “BBMP, the government and KSPCB are using the crisis to favour garbage operators who are the biggest beneficiaries,” says Leo Saldanha of non-profit Environment Support Group, which is running a sustained campaign against unsustainable landfilling. In fact, operators are patted on the back for minor improvements. Four months after KSPCB first ordered closure of Mavallipura landfill, there is still no collection system in place for segregated waste, he says. Segregated and unsegregated waste is taken to the landfills in the same truck. “The critically important process of instituting citizen-based ward committees to oversee the process has been ignored,” he adds.

Switching to segregation is not as uphill a task as BBMP is making it out to be, says Wilma Rodrigues of non-profit Saahas who has helped 21 institutions, including schools, manufacturing units and large residential complexes, switch to segregation and in-situ waste management. People are willing to segregate if they are provided the right support system, she adds.

BBMP blames its inaction on staff shortage. N S Ramakant, member of the expert committee on solid waste management set up after the high court rap, says there is a shortfall of 3,000-4,000 garbage pickers. It has recommended that BBMP should employ ragpickers as garbage collectors. All the 198 wards in the city should have a junior health inspector and every three wards should have an environmental engineer, he says. The committee has recommended that solid waste management officials should be given no other charge and be made accountable for any lapse. It has also asked for setting up of an independent board because, at present, a nexus exists between contractors and elected representatives.

Bengaluru generates 3,000-4,000 tonnes of solid waste daily. Most of this is dumped without segregation at the three landfills. Besides, BBMP illegally dumps garbage at several disused quarries, according to Saldanha. The toxicity created by tonnes of garbage in the landfills has contaminated groundwater, impacted agricultural produce, given rise to unknown diseases and even caused deaths in the 15 to 20 villages that surround each dump. In Mavallipura alone, says Srinivas, there have been three cancer deaths. Fifteen more cancer cases have been detected since 2010. 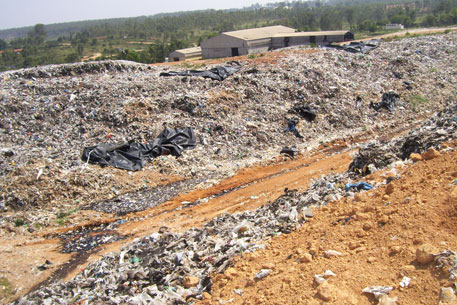 The number of patients suffering from skin diseases is also rising, he says. Skin diseases have gone up in Mandur as well. “Almost every household has one member suffering from a long-term skin disease,” says S Arvind, mango farmer at Mandur. Cases of dengue fever and kidney failure are much higher than average in villages surrounding the dumps. Despite requests, not a single health survey has been done, he says.

Toxic leachate from the landfills has severely impacted agriculture. “Mandur is famous for mangoes and grapes,” says Arvind. “But a large number of mango trees have died since the dumping began. There is also a fly menace. During the harvesting season of grapes, flies puncture ripe fruits and destroy our income,” he says. The boundary wall of Mavallipura landfill adjoins a tank that people earlier used for irrigation. “The tank water has turned toxic, so there is not enough water for irrigation in the village,” says Srinivas.

Across Bengaluru, the unrest is intensifying. Mavallipura is gearing for an all-out war as people guard the landfill entrance in groups day and night. Mandur, having given consent under duress, is determined not to let it happen again. “We do not think BBMP will fulfil its promises, but we will wait till January 29 when the three-month dumping extension period ends,” says panchayat member Rakesh Gowda.