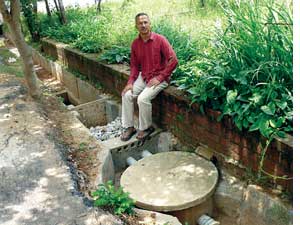 A self sustained housing society, undaunted by water scarcity

Come summer, several posh housing societies along Bengaluru's Sarjapur Road have to wait for private water tankers. Thousands of luxury apartments that have mushroomed on the city's outskirts depend on borewells for their water supply; these dry up every summer. Amidst this scarcity, residents of a small society, Rainbow Drive, declared themselves water-sufficient. Though three of their five borewells have gone dry, they did not summon water tankers this summer.

This society of 200-odd families has its own water supply management and stringent tariff system that makes people accountable for every litre of water they waste. In the past one and a half years, they have also arrested the falling groundwater in their area by harvesting rainwater.

Jayawant Bharadwaj set the ball rolling in 2007 when the society faced its worst water crisis.An IT professional, Bharadwaj bought a house in Rainbow Drive in 2002. Like other residents, he was promised water from the Cauvery; groundwater was only an interim arrangement, he was told.

"We knew we would have to dig up to 300 metres to get water. But the water level dipped further within a couple of years," said Raghavendra Rao, who bought a house in Rainbow Drive in 2003. "Pressure on the groundwater started increasing in 2004 after most families moved in. Within three years, levels reached the tipping point," Bharadwaj said. As a member of the residents' association that manages water, sewage and tree planting, he thought of making the society water-sufficient; other members supported his idea.

With the help of Rainwater Club, a Bengaluru-based non-profit, Bharadwaj chalked out a rainwater harvesting plan. Convincing others was not difficult. "I readily accepted the plan because of the pain I had to go through to arrange for water tankers," Rao said. He also offered a portion of his plot to construct a recharge well.

By end 2008, the association constructed 54 recharge wells in the society's stormwater drains and on private plots; 60 million litres of rainwater was harvested in these wells. Many also installed storage tanks on the roof to collect rainwater. But this was not enough. Sarjapur is on hard rock, which holds water only in certain fissures. Now the emphasis was on using recharged groundwater judiciously.

Bharadwaj designed a water tariff system for this. Water meters were installed to monitor the water usage of every house. "About 80 per cent of the water gets converted into sewage. So we factored in the sewage treatment cost in the water tariff system," he said. Instead of a flat rate, Rainbow Drive's water tariff increases with consumption. Since an average family requires 24-30 kilolitres (kl) of water a month, the first 30 kl is charged at an average rate of Rs 17/kl. The rate goes up to Rs 60 per kl for those whose water usage is more than 30 kl.

The association also changed its billing cycle from two months to one month so that residents can check consumption before water bills rose too high. "My water bill comes to about Rs 350. Earlier, I used to spend Rs 1,000 a month on water tankers," said Rao. On top of it, Rao gets a discount of Rs 100 every month for installing a recharge well on his plot.

A part of the water tariff collected goes into periodic maintenance of the society's two sewage treatment plants (stps), something that was not done earlier. Residents use recycled wastewater for non-potable requirements such as watering gardens and washing cars.