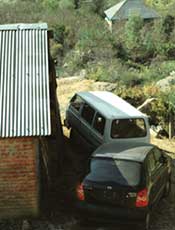 It's not every day that an innocuous email from a geophysicist leads you to a prime ministerial residence that is big time real estate. And we aren't talking 7 Race Course Road. I had to check out the villages of Prini and Jagatsukh near Manali, Himachal Pradesh, which had complaints against a proposed 192-megawatt hydro power project costing Rs 992 crore on the Allain and Duhangan rivers. Its proponent: the lng Bhilwara group, better known for the 'Mayur' brand of textiles, and a Norwegian concern. The project's environmental impact assessment (eia) report was flawed, reportedly.

It was one of those stories one wasn't quite sure of. I had phoned up a known academic, who had been an independent observer appointed by the International Finance Corporation (ifc), an arm of the World Bank which has a 10 per cent stake in the project. He'd told me the environmental and social impact assessment (esia), done to meet the ifc guidelines, was faulty and based on data from 1993-94. He'd mentioned the project now incorporated the critique of ifc . I had also called up a social activist, who follows such cases avidly. He'd told me the project had violated eia norms by not holding a public hearing. I finished my assignments in Pathankot and got on to a rickety bus to Manali. I got my first 'quote' while still on it. A man from Prini was on board.

"The project is a blessing and has created employment in the area," he said. After a while, he quietly noted that his brother was a project contractor. On reaching Manali, I called a person who, the geophysicist had told me, was opposed to the project. "I was a key member of the movement against the project. But they are my employers now," he told me. He gave me a name and phone number of a person who was part of the protest. Ditto. After going through a chain of hesitant ex-protestors now employed by the project proponents, I managed to speak to one person who was willing to talk openly.

Dinesh Sharma, 34, the pandit of Jagatsukh, returned to his village after graduation in Delhi, and also runs a local environmental ngo. "The project was proposed in 1993. But we found out only in 2003, after it had been cleared," he complained. He took me to meet others. Among them was Sanjeev Sharma, who said: "When we asked project officials, we discovered to our disbelief that along with all government clearances, the project proponents had no-objection-certificates (nocs) from the sarpanchs (heads of village panchayat) of both Jagatsukh and Prini." Vidya Prakash Bharadwaj of Jasgatsukh elaborated: "When we approached the local political leaders and government officials, protesting this secrecy, they branded us as anti-national."

Pannalal, 76, laid out the villagers' objections: "After boulders fell on village women from the construction site, we got angry. We insisted the full reports of the project and its environment and social impact be made available in Hindi. We demanded a public hearing. Who will tell us how the diversion of Duhangan river will affect irrigation of paddy fields downstream?"

It was then that Dinesh Sharma and other residents of the two villages wrote an email to ifc. The villagers commended the role of ifc, which pulled up the Allain Duhangan Hydro Power Limited (adhpl) for violation of esia norms -- this was the corporation's first investment in India. Ashok Joshi, project director of adhpl, later told me: "We had everything cleared until we entered into an agreement with ifc."

Later, I got a phone call from an adhpl employee -- no point naming him. A meeting was arranged for 'site-seeing'. While ferreting personal information from me, he tried to dissuade me from doing the story. I got broad hints of a job offer: liaison officer with a monthly salary of Rs 40,000 and a Tata Indica car. He showed me a house where I could settle -- after getting married. "Then came the sweet assurance: "We know your editor very well."

I proceeded to Prini, where I wasn't allowed to speak to the sarpanch who had given the project the noc in 1997. Her father-in-law Karamchand headed the protest against the project. Then things changed: "We were fooled by some activists. But we don't want to go against national interests now." Prini, it later became apparent, was by and large supportive of adhpl -- the village of 700, where former prime minister Atal Bihari Vajpayee has a summer abode, has several instant lakhpatis. Land prices are up from Rs 7,000 per bigha to Rs 1,25,000 per bigha. Jindu Ram was paid Rs 1.2 crore for his land that went into the project. He parks his brand new Hyundai Sonata in Manali. Village roads aren't fit for the luxury car. Then came the most startling revelation: the geophysicist who'd written to us had become a adhpl consultant.