A community project conserves the non-migratory birds in Rajasthan 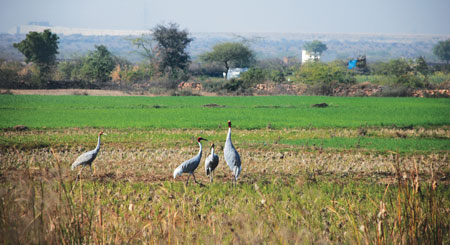 Immediately after school, 15-yearold Surendra Kumar rushes to the wheat fields running parallel to the main Chambal canal in Umaidganj village in Rajasthan’s Kota district. He begins his search for a pair of Saras Cranes and their two young ones—the crane family he has been tracking for four years now. After spotting them he takes out a pen and a notebook from his muddy school bag to note down the exact time, date and location.

Saras is a non-migratory bird found around open wetlands. It has been categorised “vulnerable” in the red data list of the International Union for Conservation of Nature (IUCN); it is threatened by poaching and destruction of eggs.

Saras Cranes venture out of wetlands during the day in search of food. Surendra’s 12-year-old brother Ashok joins him in the fields with home cooked lunch. They spend three hours watching the crane family, heading home only after the cranes reach a nearby water body to roost. The brothers are back in the fields early next morning before school. Their father, Latur Kumar, is a daily wage worker. While the brothers are at school, he stops on his way to work to check on the cranes. Latur started this exercise in 2002 and his sons followed his example.

A few kilometres away in the wheat fields in Haripura village, Brij Mohan Malav, a 48-year-old government school teacher, is seen advising farmers on protecting cranes. “My job gives me spare time. I love to spend that time saving these beautiful birds,” he says. One could narrate many such stories of individuals or groups doing voluntary conservation work around Kota.

The initial push for such efforts came from a community participation project initiated by Jatinder Kaur, a specialist on Saras Cranes with a PhD on habitat behaviour and breeding of Saras in semi-arid tracts of Rajasthan from the Wildlife Institute of India, Dehradun. “Saras is an ecologically significant bird. It is a farmer’s friend as it feeds on pests found in the fields,” she says.

During her research she often took help from people in Umaidganj and adjoining villages to locate Saras Cranes and their eggs. “Soon I realised that community participation is the most effective way to conserve wildlife,” she says. Kaur wrote a proposal to the Wildlife Institute of India in 2000 discussing the potential of community involvement in conservation process. The project was approved the same year and Kaur began a community awareness campaign in villages of Kota.

She eventually won support from other organisations like the Bombay Natural History Society, the Wildlife Trust of India and the State Wildlife Department. Kota is the only place where the cranes breed twice a year as the canal water which fills its marshes is available throughout the year—July to October is the usual nesting season but in Kota Saras Cranes breed again around February and March. This prompted Kaur to choose Kota for her project. An all India 1998-99 survey recorded 252 Saras Cranes in the summer months in Rajasthan and 366 in winters. This is the last official survey available. Kaur’s research shows that currently Kota alone has around 150 Saras Cranes.

This, she says, is a 25-30 per cent increase after the project took off. The campaign involves conducting workshops with slide shows and movies in the local language to inform villagers about the “vulnerable” status of Saras Cranes. Quizzes on Saras Cranes are organised in schools to educate children.

“Conservation of wetlands and their management is a crucial factor for the survival of Saras Cranes and we include this aspect in our workshops,” says Kaur. Saras is a territorial bird which makes it possible for a group or an individual to watch over a pair or two. Interested villagers are asked to maintain a daily record. “Everything is on a voluntary basis,” explains Kaur. Some get inspired and take on additional responsibilities. Malav of Haripura village, for example, has taken the project to adjoining Baran district.

When Kaur started, checking stealing of eggs was a challenge. “Migrant workers stole eggs to eat or to use it as a medicine to cure their cattle of eye diseases,” says Kaur. With villagers acting as guardians to the birds, stealing has stopped altogether, she adds. After the successful completion of the Wildlife Institute of India project, Kaur received financial support from the Oriental Bird Club of the UK and from the Rufford Small Grants Foundation to continue the project.

This helped her extend the project to Bundi, Baran and Jhalawar districts. There are 40 volunteer groups in these districts and every year a recognition ceremony is organised to encourage them. The groups which perform well are awarded utility items like cycles, mobile phones and raincoats.

At times, though, the conservation work does not materialise according to plans. The past two years were particularly difficult. A famine in 2009 and erratic rains in 2010 hampered crane breeding. Renovation work on the main Chambal canal meant the water flow to the canal stopped, causing the wetlands to dry up. The dried wetlands were encroached for agriculture.

“Encroachment is particularly rampant in Baran and Jhalawar,” informs Malav. “Many Saras Cranes just moved out in search of water. It is tough to circumvent natural calamities but we should not stop trying. We tried to save the few nests which existed and focussed more on strengthening the training and awareness programmes to keep the villagers motivated,” says Kaur.

She wrote to the Kota administration regarding encroachment but no action has been taken so far. However, due to her persistence, the administration has proposed to convert the wetlands in Umaidganj into the Umaidganj Pakshi Vihar (sanctuary).

Though the last grant from the Rufford Small Grants Foundation was exhausted by 2010, Kaur with her support group manages to carry on the conservation work. “The financial grant always helps but the lack of it cannot discourage us,” she says.

This conservation model is now popularly known as the Kota model and is being replicated in other states like Gujarat and Uttar Pradesh where the Saras population is much higher than in Rajasthan. “This has proved to be one of the most cost-effective methods of conservation as it involves the villagers, especially in the case of species found outside protected areas,” says Kaur.