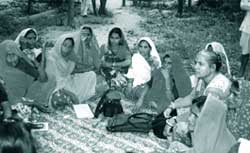 In 1992, a viral epidemic spread through the Jheelo ki Basti of Udaipur district in Rajasthan. Healthcare facilities were limited and many children died. The scourge was finally contained only with the help of traditional healers in the area, whose kada (potion) quickly brought a frightening situation under control.

The episode was a wake-up call for Bhanwar Dhabai, secretary of Jagran Jan Vikas Samiti (JJVS), a non-governmental organisation (NGO) in Udaipur. “I realised the only way to ensure good health in villages was to preserve and promote the knowledge of traditional healers.

For their invaluable wisdom, we address them as gunis or the wise and skilled,” Dhabai told Down To Earth.

She began to track down healers in nearby areas, and made another discovery: gunis were disappearing fast, and with them, their knowledge systems. “The knowledge was not being passed on, as the guru-shishya parampara (teacher to student tradition) was dying with youngsters no longer interested in conventional customs,” Dhabai recounts. Given this reality, she felt it was crucial to document the knowledge and form a healer network.

Easier planned than done. “Initially, they were afraid the knowledge might be misused, or that sharing it would reduce their role,” recalls Dhabai. Once they were convinced, however, the healers participated in a workshop with JJVS, where they pooled their knowledge. This interaction also established the benefits of networking, and soon they encouraged other gunis to join them.

Today the network has 1,100 gunis. 800 are in Rajasthan but the rest come from 10 states across India. “It’s very helpful being together and word about us also gets around,” says Uday Singh, one of the first gunis to join up.

There are other gains. Earlier, gunis treated patients for free, calling their knowledge god’s gift. But often, patients had faith only in medicine they had to pay for. Leukeria medication, given free to women from Bela village, was labelled ineffective. But a door-to-door survey by perplexed samiti members found that in many families, the free medicine was perceived to be useless and lying unused. Yet the medicines, once consumed, worked wonders. Thereafter, the gunis were asked to charge Rs 5-10 for every dose. Now the medicine has more takers; Rodi bai of Roadda village, Udaipur, gets 20-50 patients daily and earns Rs 3,000-Rs 7, 500 per month.

The samiti is also trying to ensure that the gunis train at least one person so that their expertise doesn’t die with them. It’s also important to keep rare herbs going. To ensure this, a seed bank has been set up. In addition, JJVS has initiated an annual 30-day, three-phase training programme. First, gunis exchange their knowledge about cause, prevention and treatment procedures in various diseases. Second, they go on a forest tour to identify and procure herbs, which are then exhibited and discussed. In the final phase, gunis discuss their procedures on preparing medicines.

This knowledge is also being extended at the district and state levels. JJVS has convinced some schools to grow medicinal plants, so that children can learn about herbs and their usage, collect seeds and grow plants.

As a result of the samiti’s efforts, word has spread and people are returning to the benefits of traditional medicine. “I spent Rs 1,000 on allopathic medicines for my son’s earache, but nothing worked. Then I came to Rodi Bai, and my son is now getting well,” says Laxman, who has come from his village, 28 kilometres away.

Rodi Bai has a one fix-all formula that treats everything from stomach infection to toothache and worms, with fresh juice of the plant kalali (Tridex procummbens).

JJVS has also evolved the national Guni Manch, a platform where the samiti’s network of gunis can meet, discuss concerns and protect their rights. Dhabai says her priority now is to get the gunis registered, so they can be formally recognised and their knowledge valued. To protect the know-how, the samiti has also introduced documentation and 100 medicines for ailments like asthma, eczema and blood discharge are registered with the Directorate of Ayurveda, Union ministry of health and family welfare.

“Registering medicines would ensure that they are not patented by international organisations,” explains Ganesh Purohit of JJVS. While the state officials are apathetic to this threat, the samiti is maintaining records of knowledge systems at the village level through gram sabhas. “This way there is proof that the knowledge is already being used, and hence cannot be patented.”

Dhabai goes further. “The guni system should be treated as a separate system of medicines, on par with ayurveda which is practiced by vaids, who are respected everywhere as experts”.