How did COVID-19 pandemic pan out for India’s farmers? Check out these 8 charts

43% respondents were ‘worried about the food’, 21% ate ‘less than usual’, 14% skipped meals completely, while 5% went ‘without eating for a whole day’

The agriculture sector was one of the few sectors in India that recorded a growth of 3.6 per cent in 2020 compared to 2019, according to the central government. However, a pan-India survey has for the first time looked into how the COVID-19 pandemic impacted Indian farmers at various levels.

Agriculture and its allied sector employ over 40 per cent of the total workforce in India. 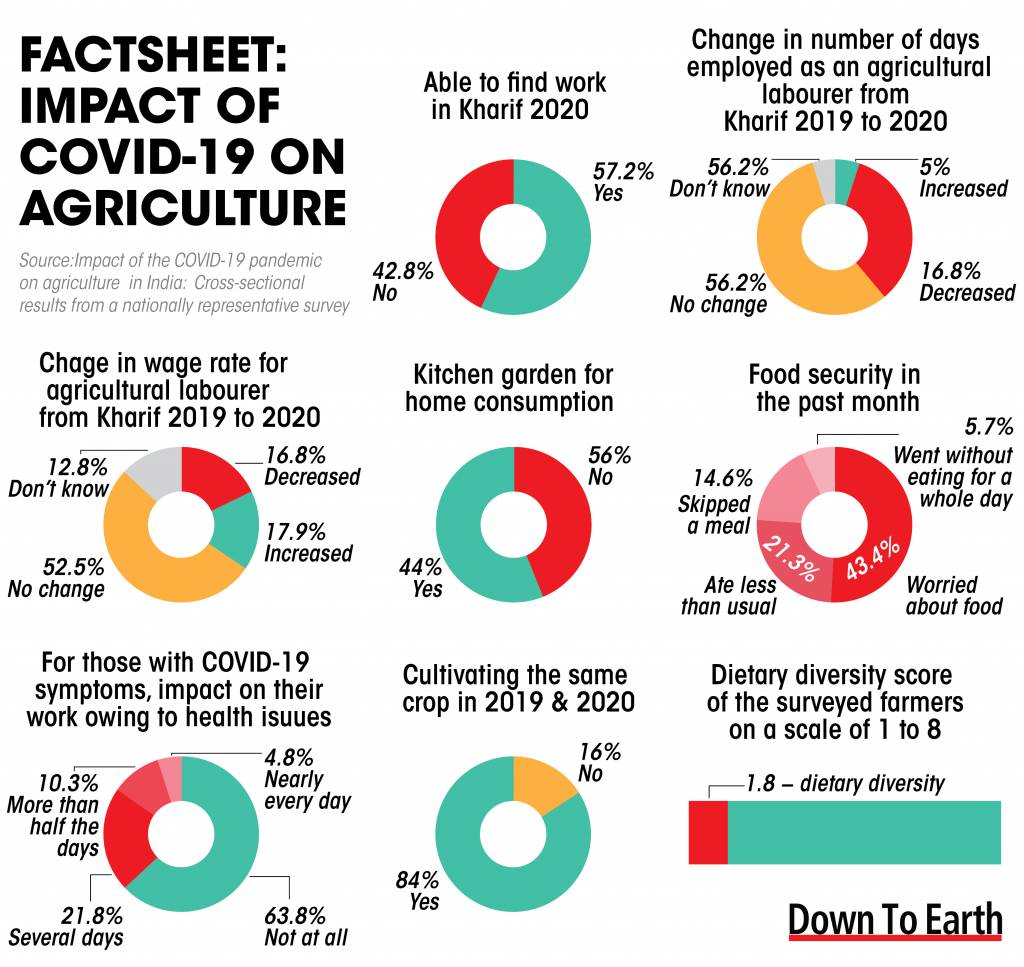 The survey was conducted in 20 states with a total of over 3,500 respondents, which included agricultural labourers and small, medium and large holding farmers.

Farming households in India were already in debt before the pandemic due to the rising cost of cultivation while production of wheat and rice stagnated, according to an earlier study.

COVID-19 caused a major disruption in the supply chain and farmers had difficulty selling their products because due to low prices or major travel restrictions due to lockdown.

Over half the survey respondents reported having problems accessing labour or other inputs like fertilisers and pesticides. This resulted in farmers not being able to sow crops in time.

The study also analysed whether COVID-19 had an impact on the dietary habits of the respondents. Agricultural production is also a ‘direct source of food’, apart from being a source of income

The survey reported that 44 per cent of the respondents had to consume what they had grown in their backyard or ‘kitchen garden’, as they had no access to mandis or markets due to lockdown.

Apart from consumption, COVID-19 had a direct role in the diversity of the food choices a farmer could avail, the study highlighted. Monocroppers — who grew only one crop a season — had a bigger decline in dietary diversity compared to farmers who grew more than one kind of crop per season.

The study also found that one in every five farmers had problems accessing bank credit during the Kharif season. Farmers from Madhya Pradesh suffered the most.

Apart from consuming food from his/her own ‘kitchen garden’, farmers also had to reduce the price of their produce or look for newer markets as a coping strategy, the study found.

The analysis also pointed out measures by the government to mitigate the precarious situation of farmers. The Agri Infrastructure Fund was set up to fund various agricultural cooperative societies, farming organisations, agricultural entrepreneurs and startups during the pandemic.