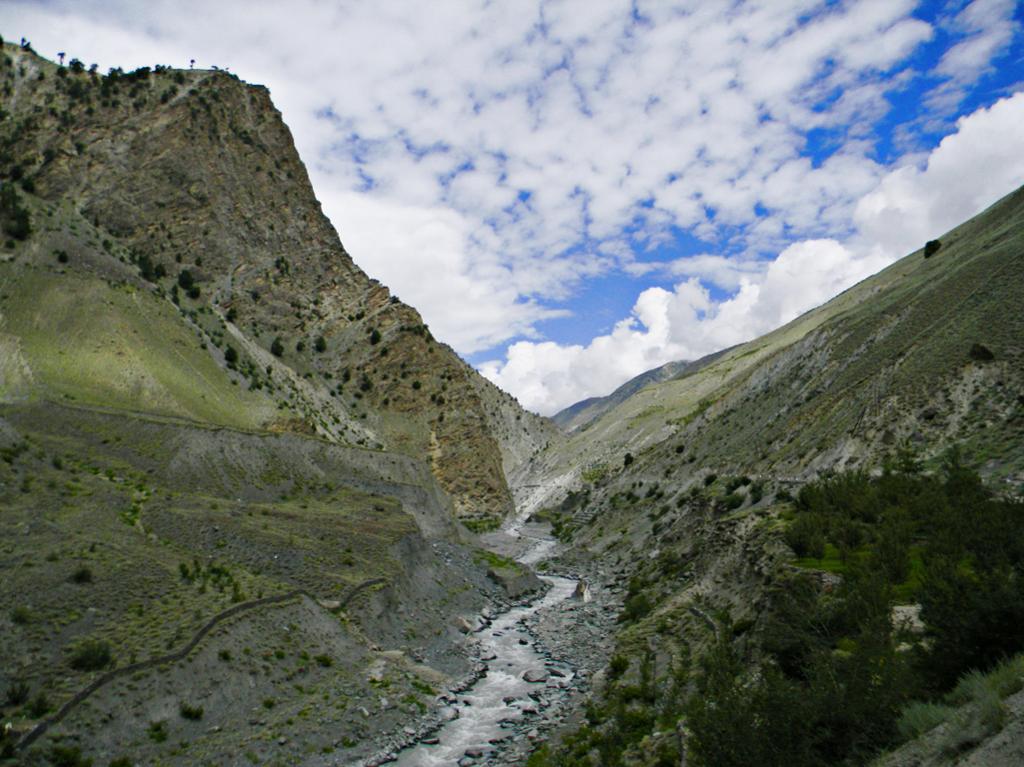 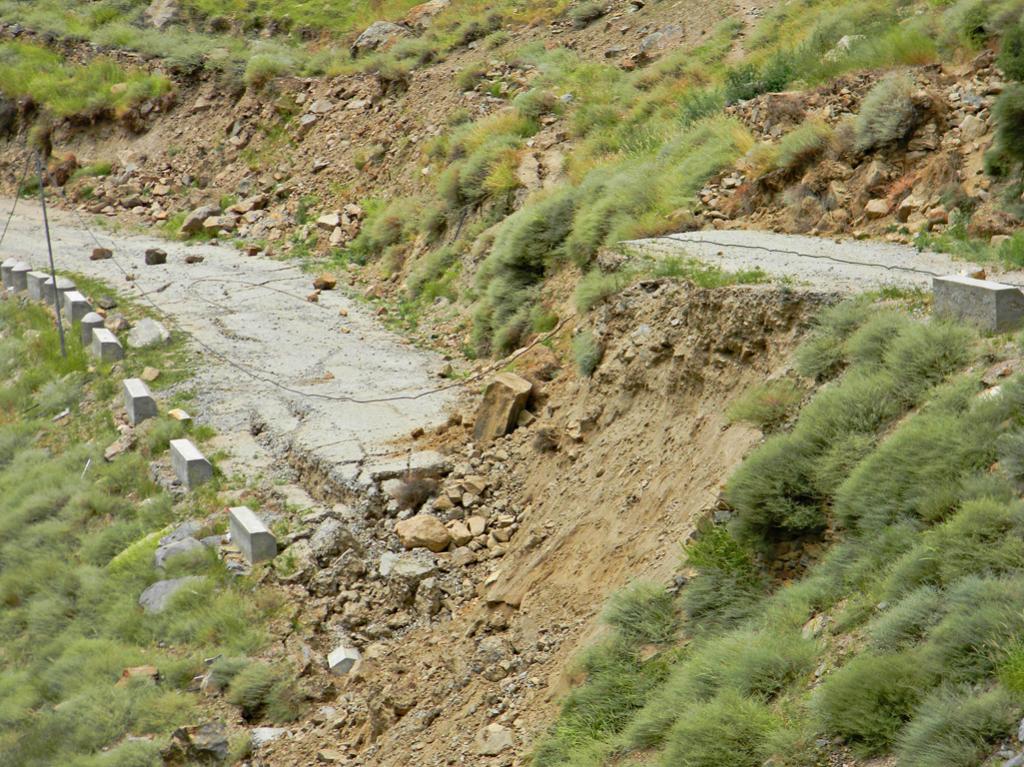 Road to Sudarang Village slides down. 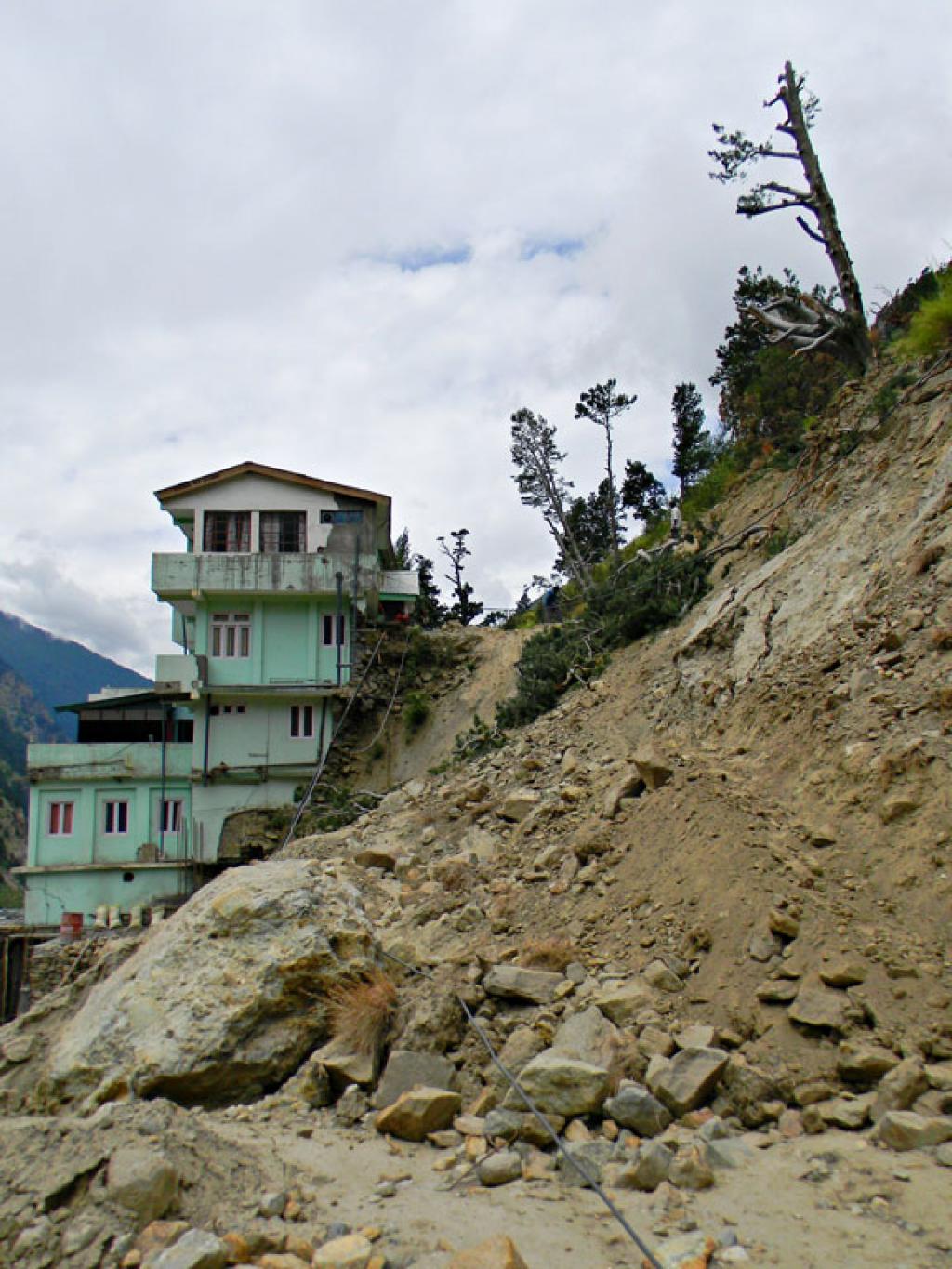 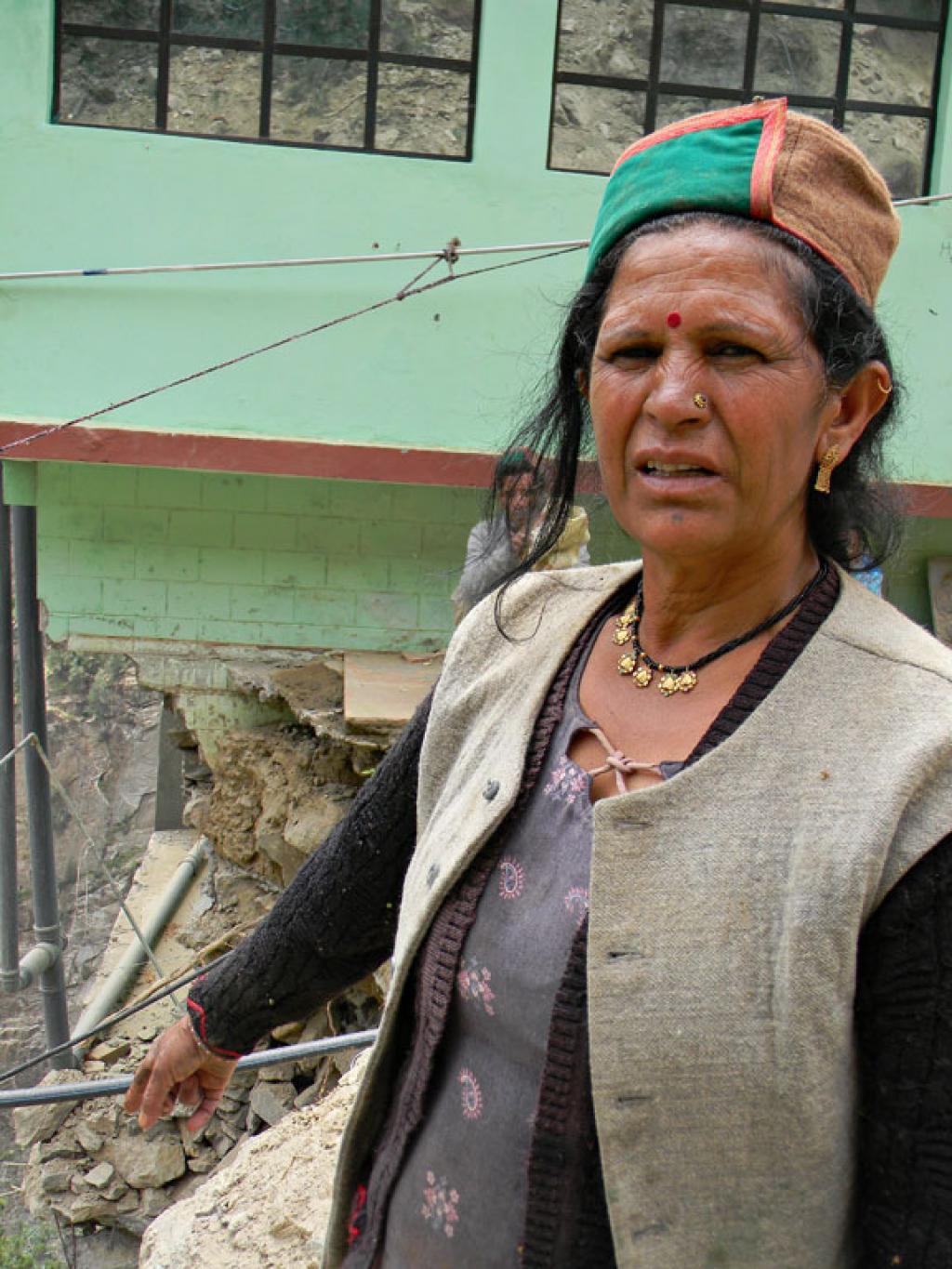 Deva Devi was running a guest house in her home. which collapsed in the rains. 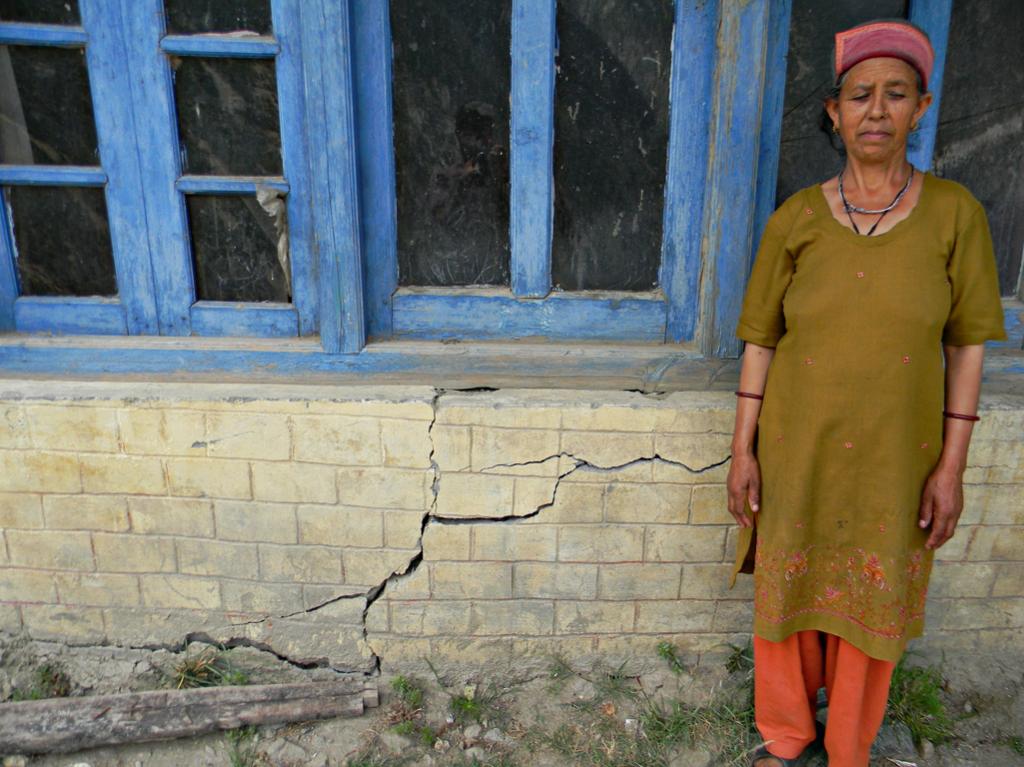 Kamla Devi distressed by the numerous cracks that have appeared in her house at Sudarang. 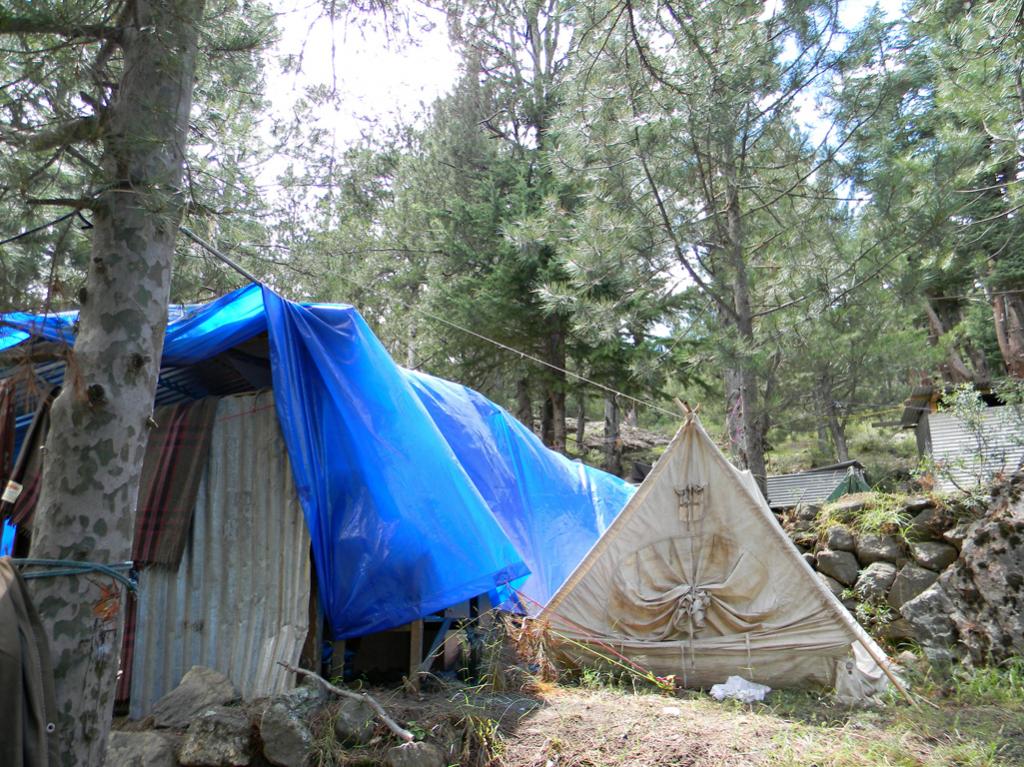 Temporary shelters build for the affected people by the government in Sudarang. 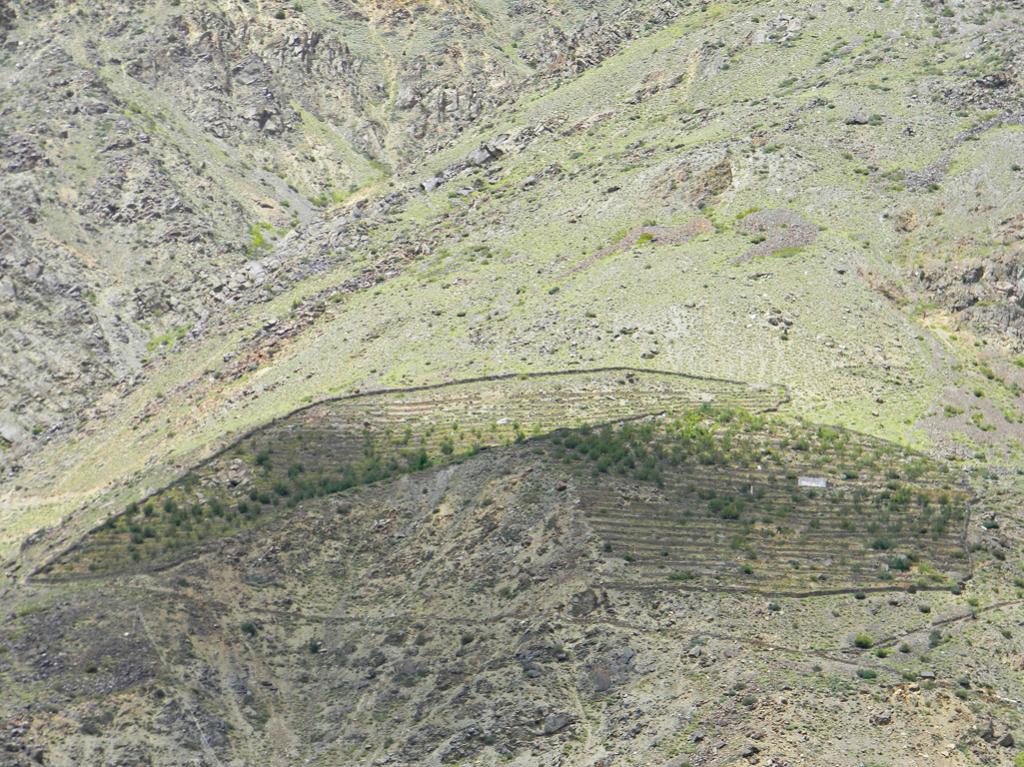 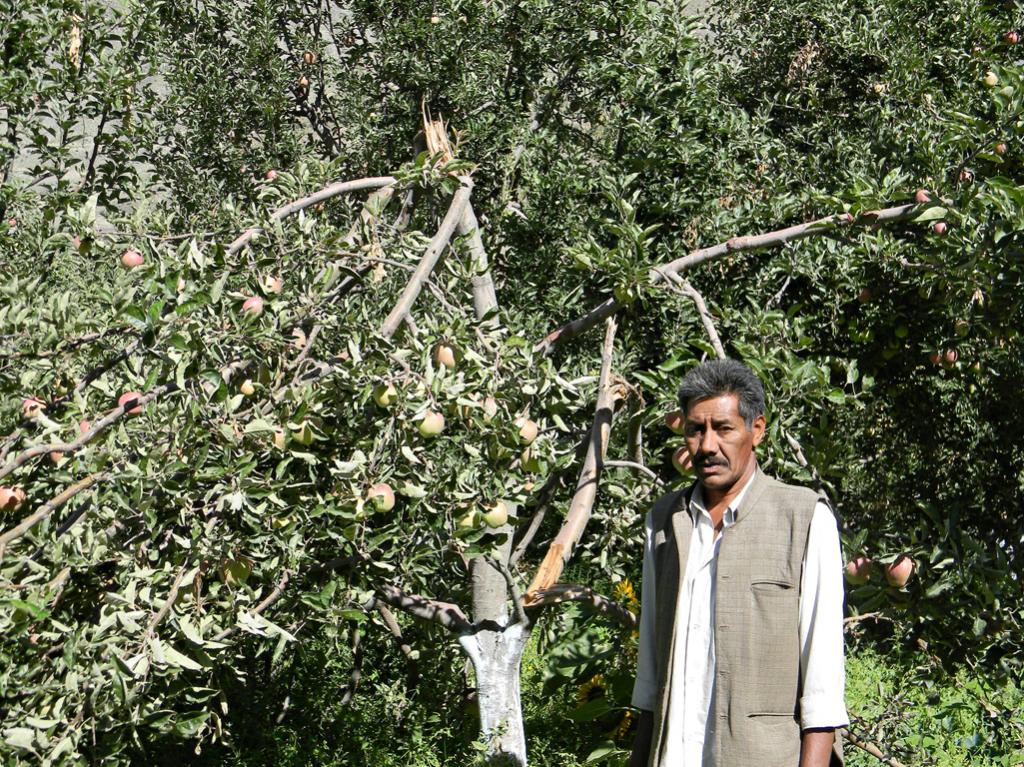 Apple is the mainstay of the Kinnaur economy.Untimely & intense snowfall in the peak of summer spelt disaster for the apple crop this year. 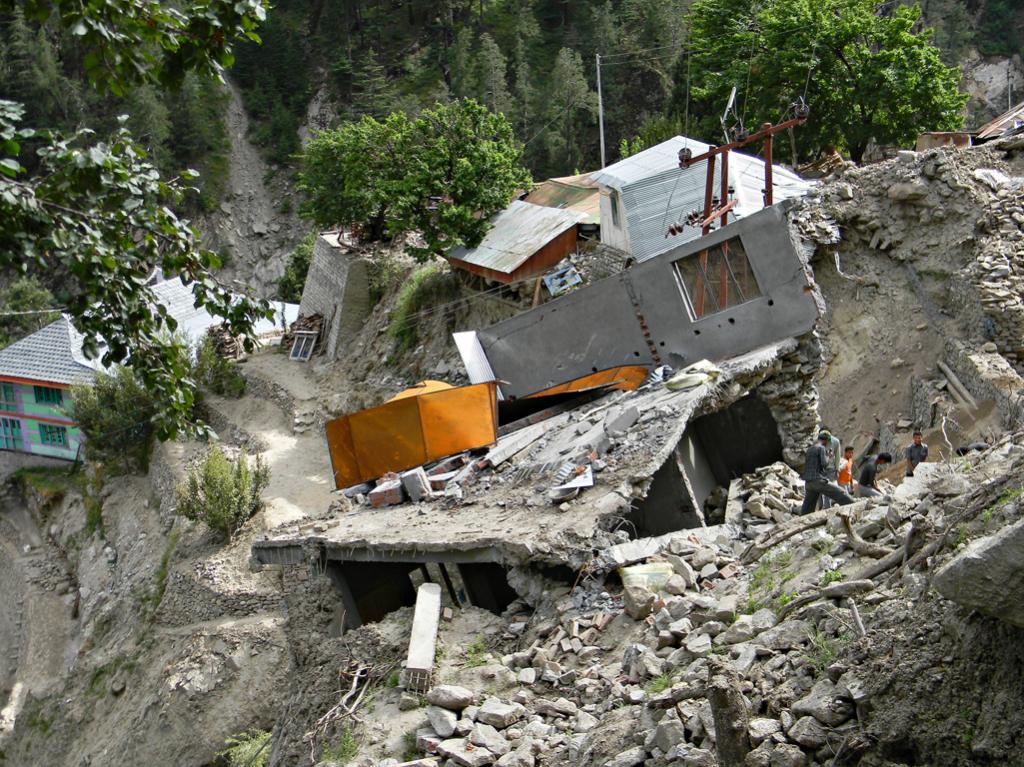 Reminents of houses surrounded by debris of land slide in Pangi village. 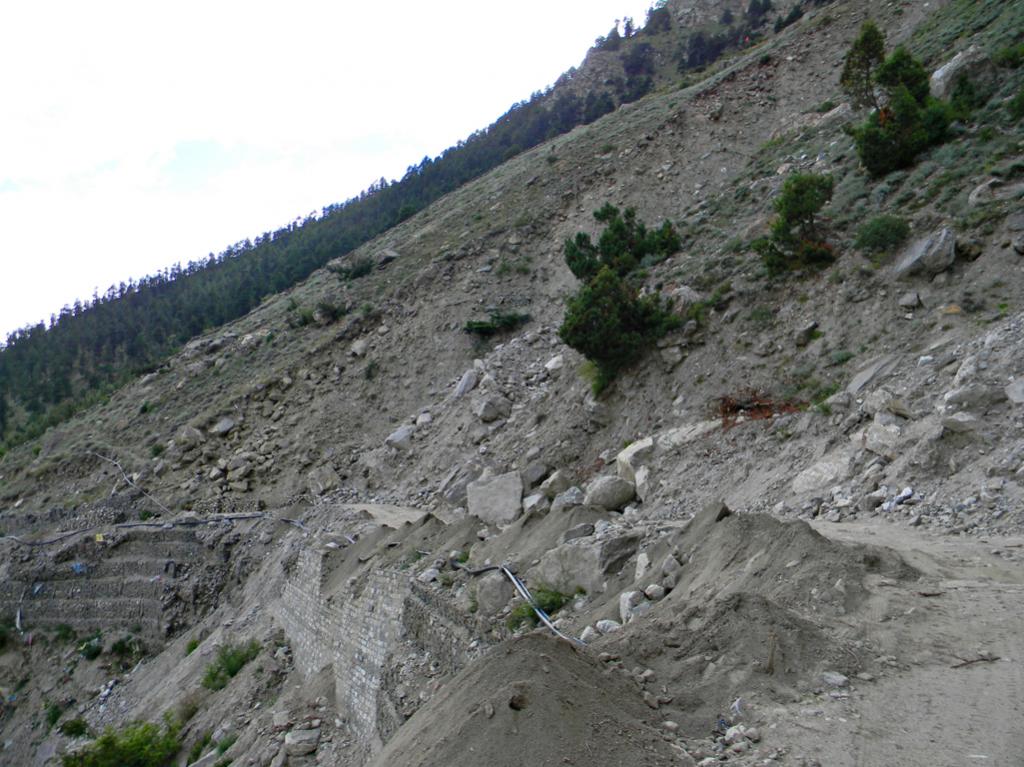 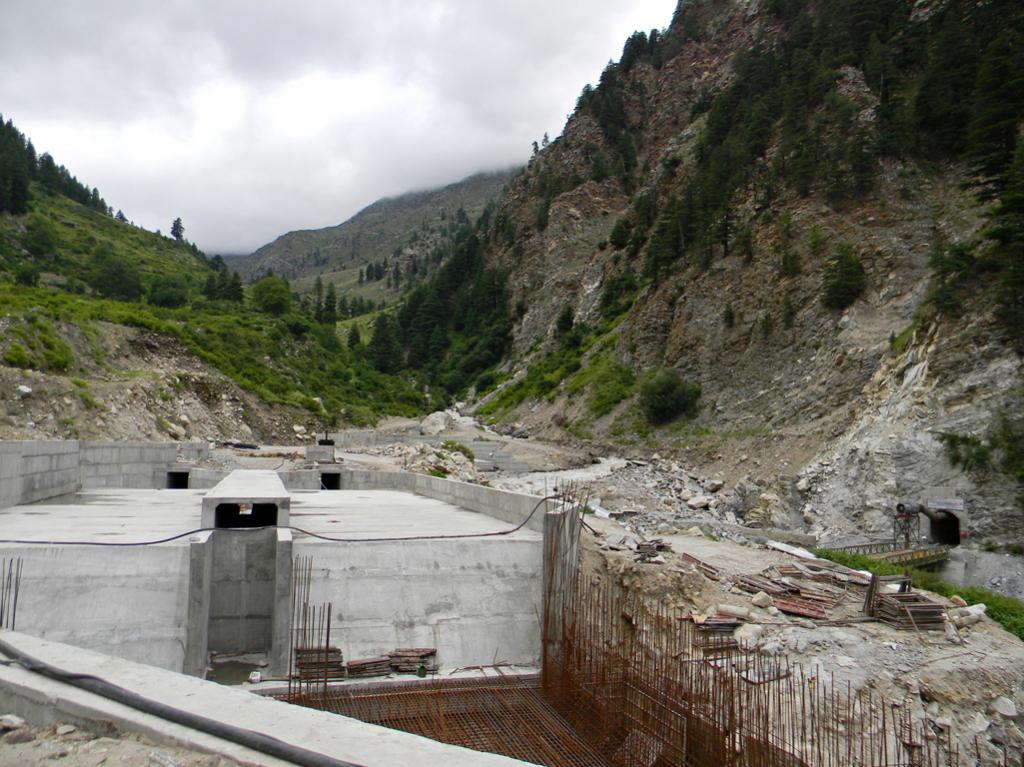 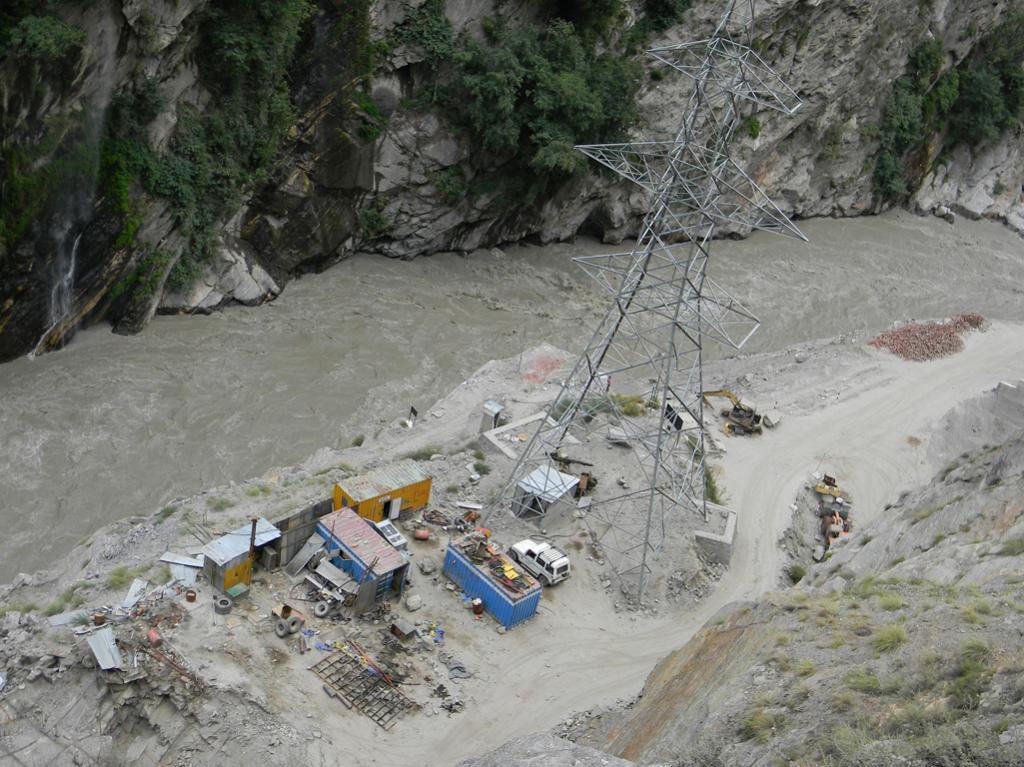 Kashang-I power house site on the right bank of the Satluj whose approach road and machinery got washed away during the June rains. 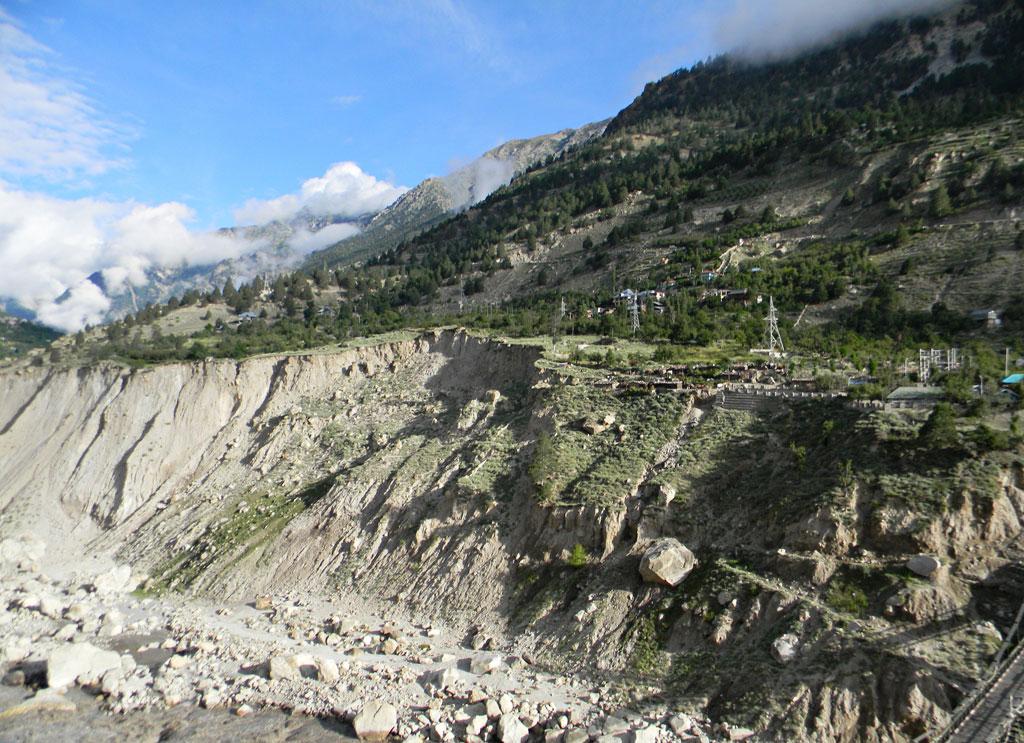 Akpa, Khadura and Rarang villages sitting on a dangerous land slide re-activated during the June calmity. These villages are also going to be affected by the proposed Jangi-Thopan-Powari Hydro Project's tunnel. 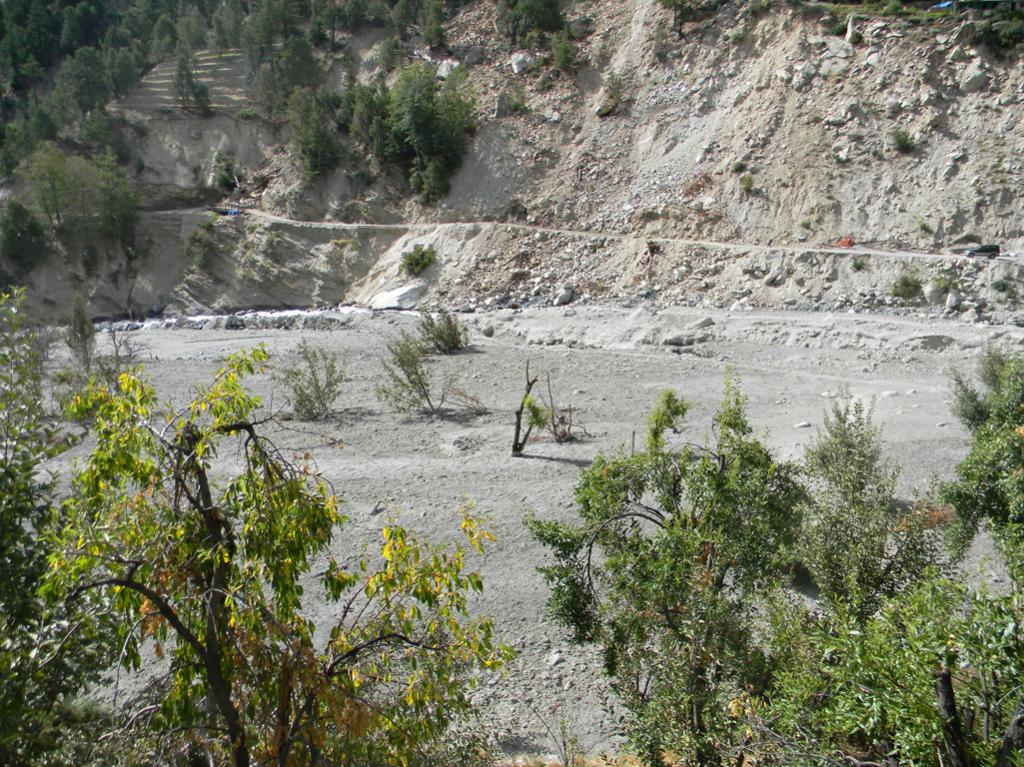 Pajer Khad a local stream, flowing adjacent to Lippa village took away many apple orchards when it came into spate during the June rains. 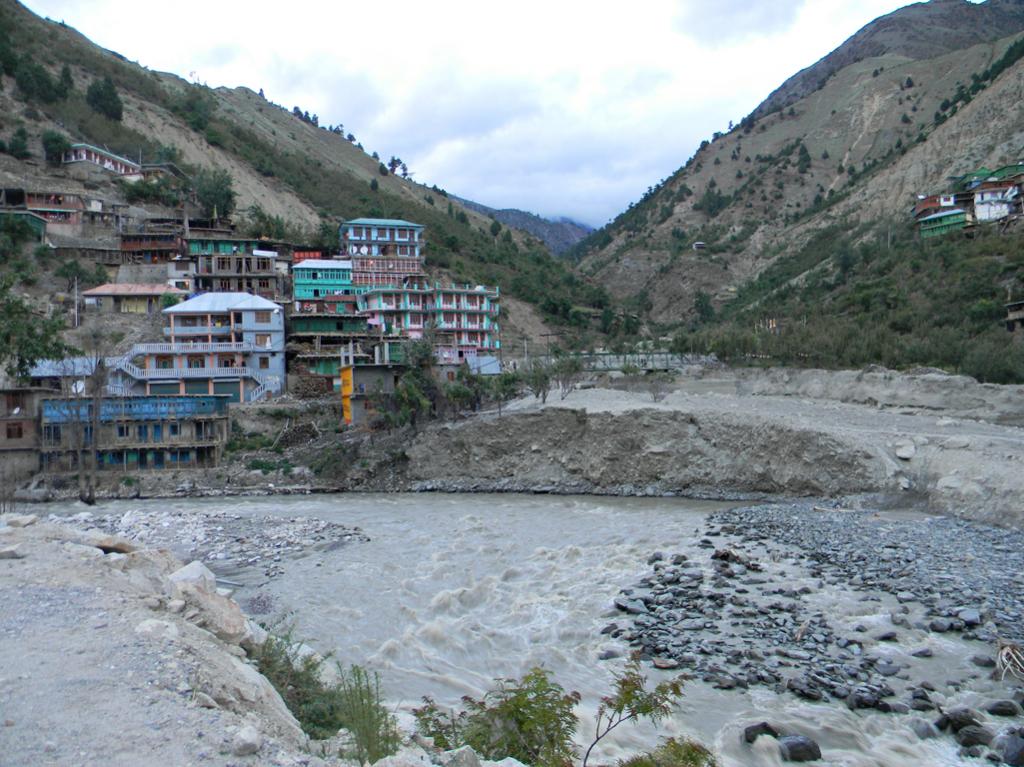 Pajer Khad at Lippa brings tons of debris during floods which is flushed away by Kerang Khad.If 3rd phase of Kashang integrated project is built, Kerang will dry up destroying a natural mechnism protecting Lippa. 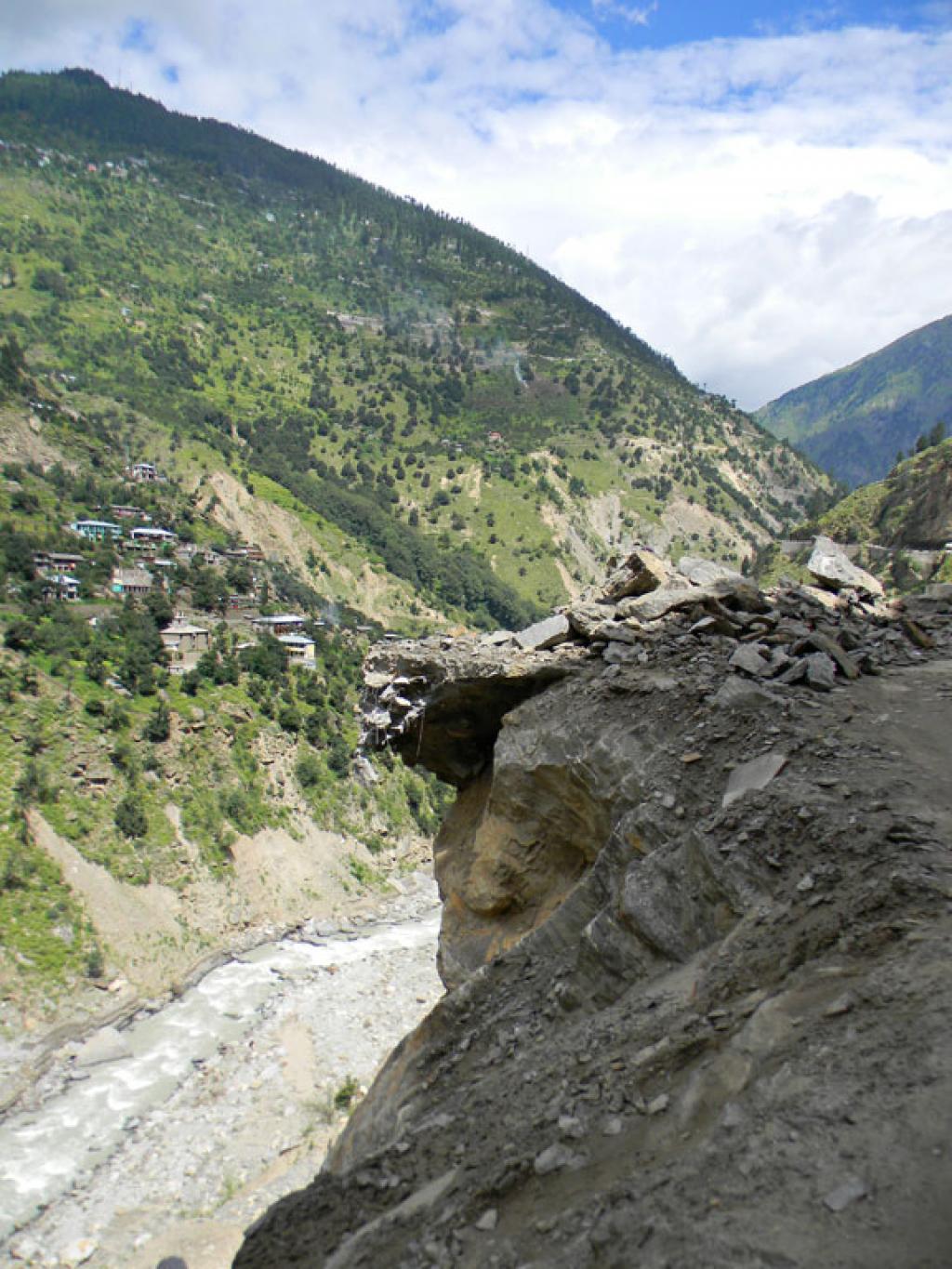 The road from Karcham to Sangla is now dotted with land slide & breakages. 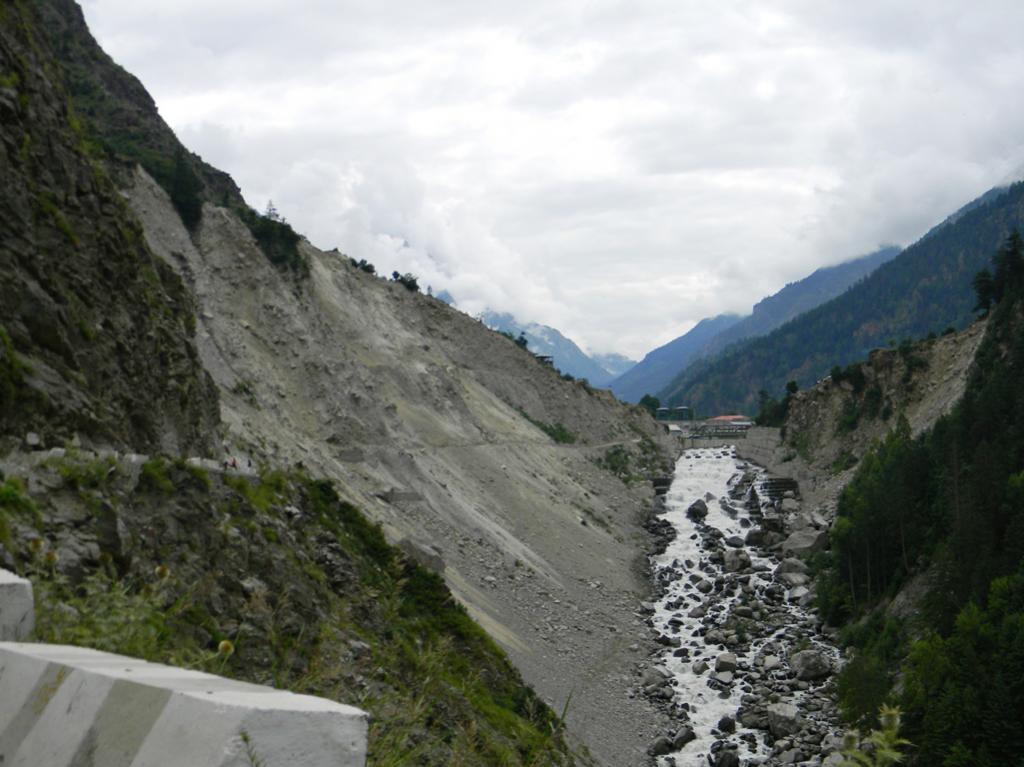 Land slide on the right bank of the river Baspa near Jaypee's 300MW Baspa-2 power project blocks the road. 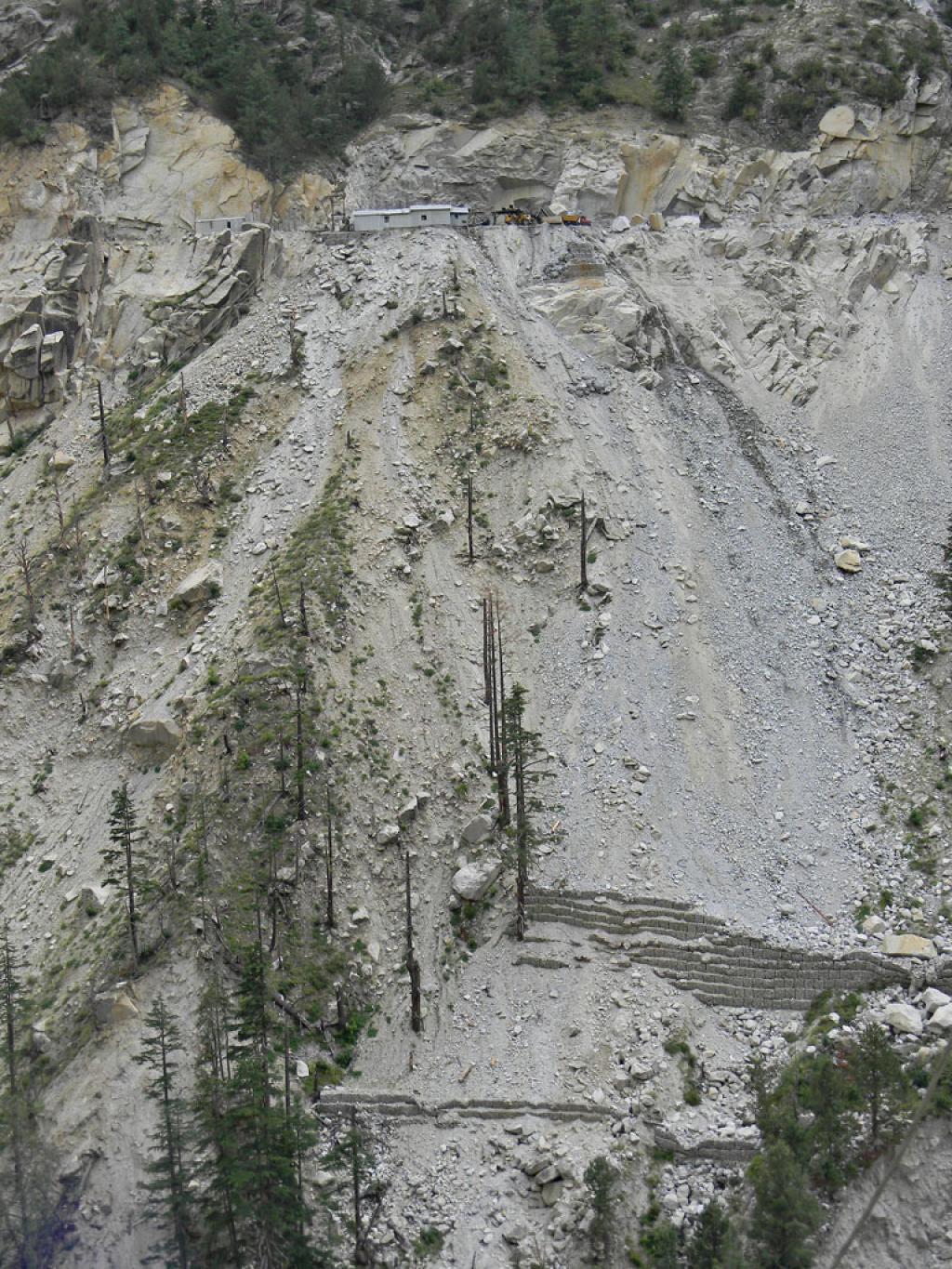 Construction activites of Tidong-1 hydro project destroy rich Deodar & Chilgoza Pine forest.Deforestation in Kinnaur has been a leading cause of soil erosion in the last few decades. 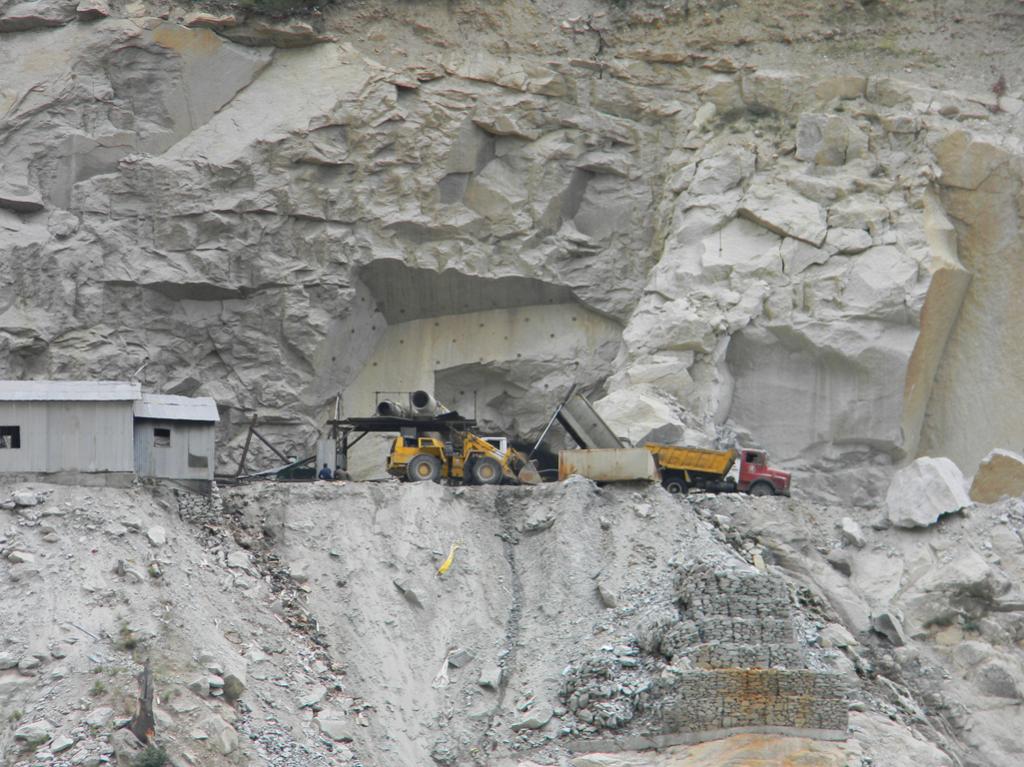 Apart from destabilising the land blasting for tunnels has caused drying up & disappearance of natural water soures in the villages located along tunnel.This information has been documented by the IPH Department. 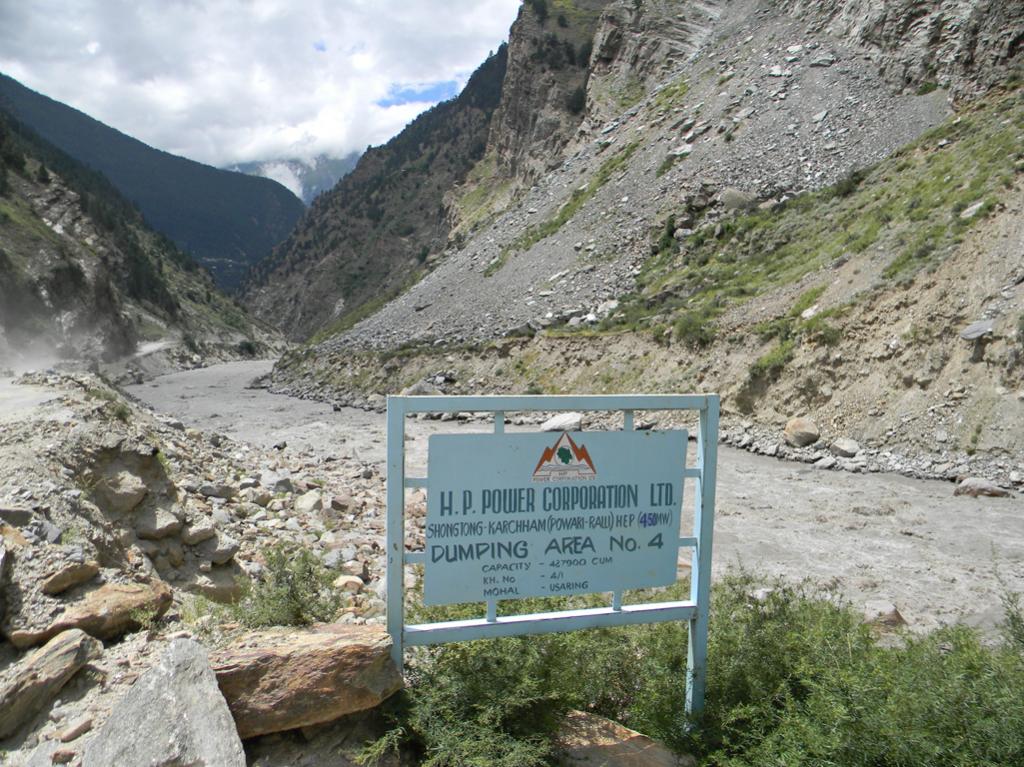 Muck dumping of project debris is done along the Satluj river-bed. In flood situations the impact increases manifold because of the heavy silt load as the muck gets carried away by the river. 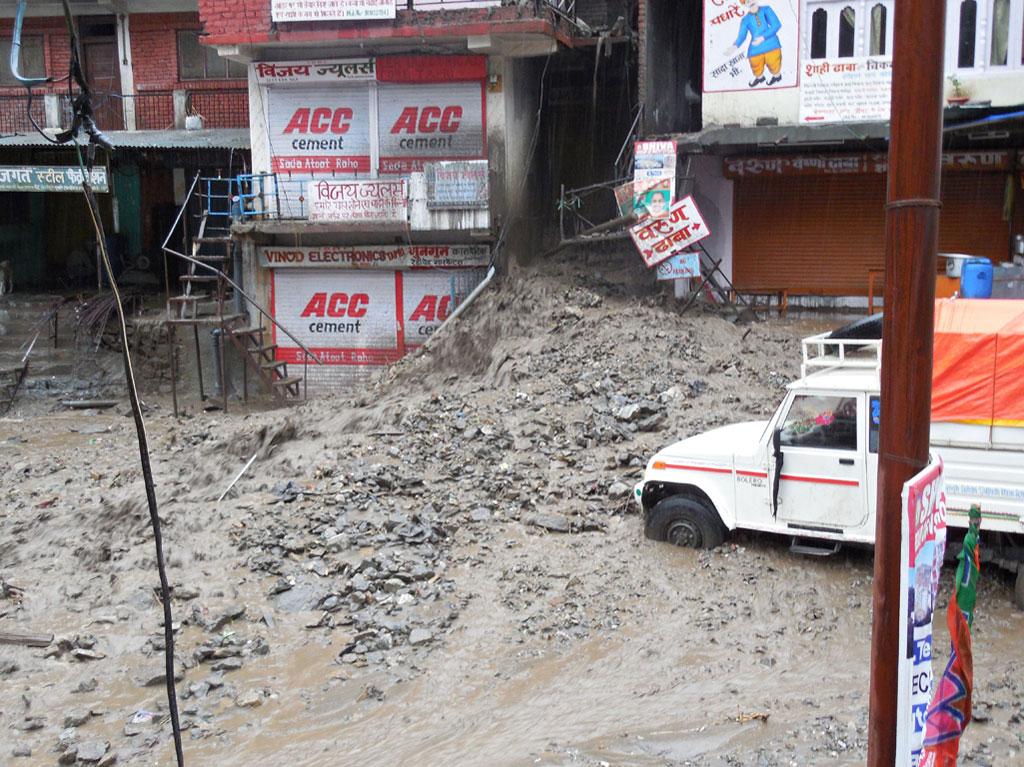 Land slide above Tapri village brought down muck into the shops in the market.Tapri is located on the right bank of the Satluj river & the tunnel of Jaypee's 1200MW Karcham Wangtoo project passes through it. 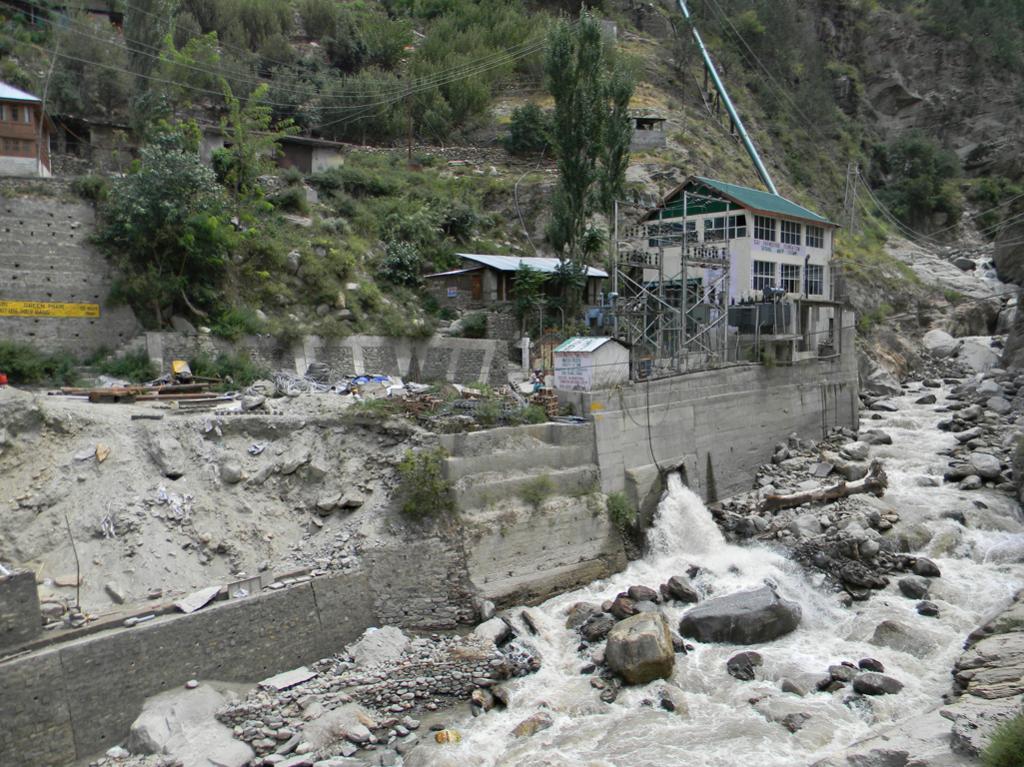 Apart from large projects on the Satluj river there are several small projects on its tributaries. These projects are causing equal damage to the local ecology and landscape, like this micro-hydel on Tangling Khad. 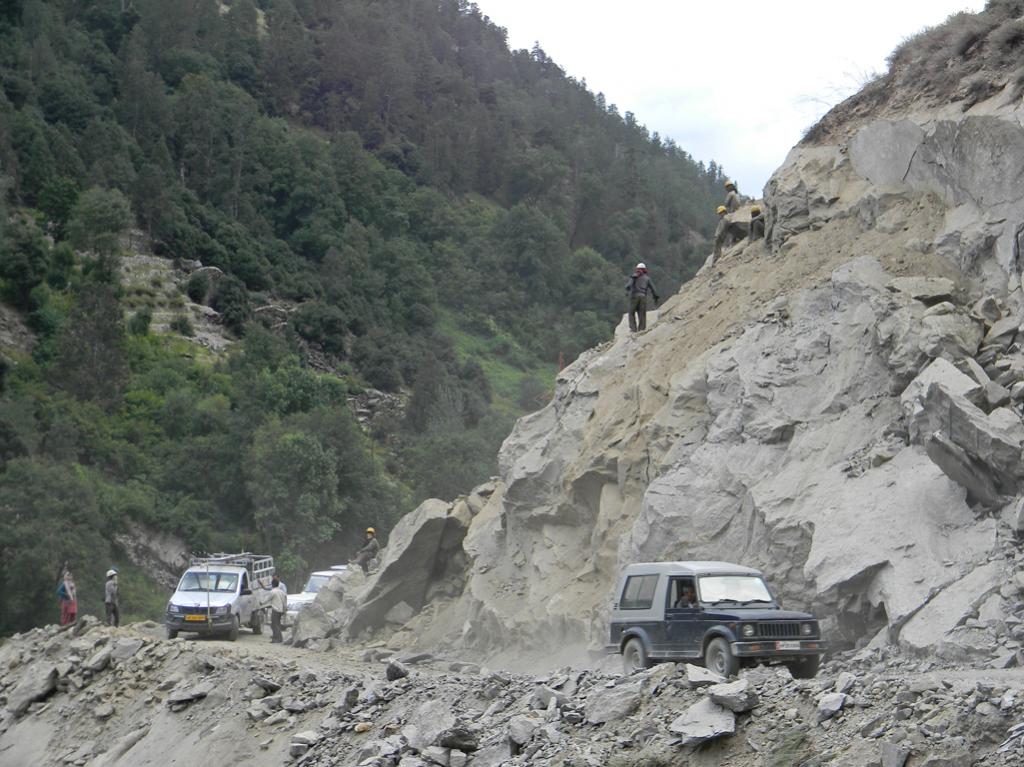 Unregulated Blasting & Drilling for road construction & expansion have made the already fragile slopes even more precarious. After the calamity there has been increasing pressure to repair and expand roads. 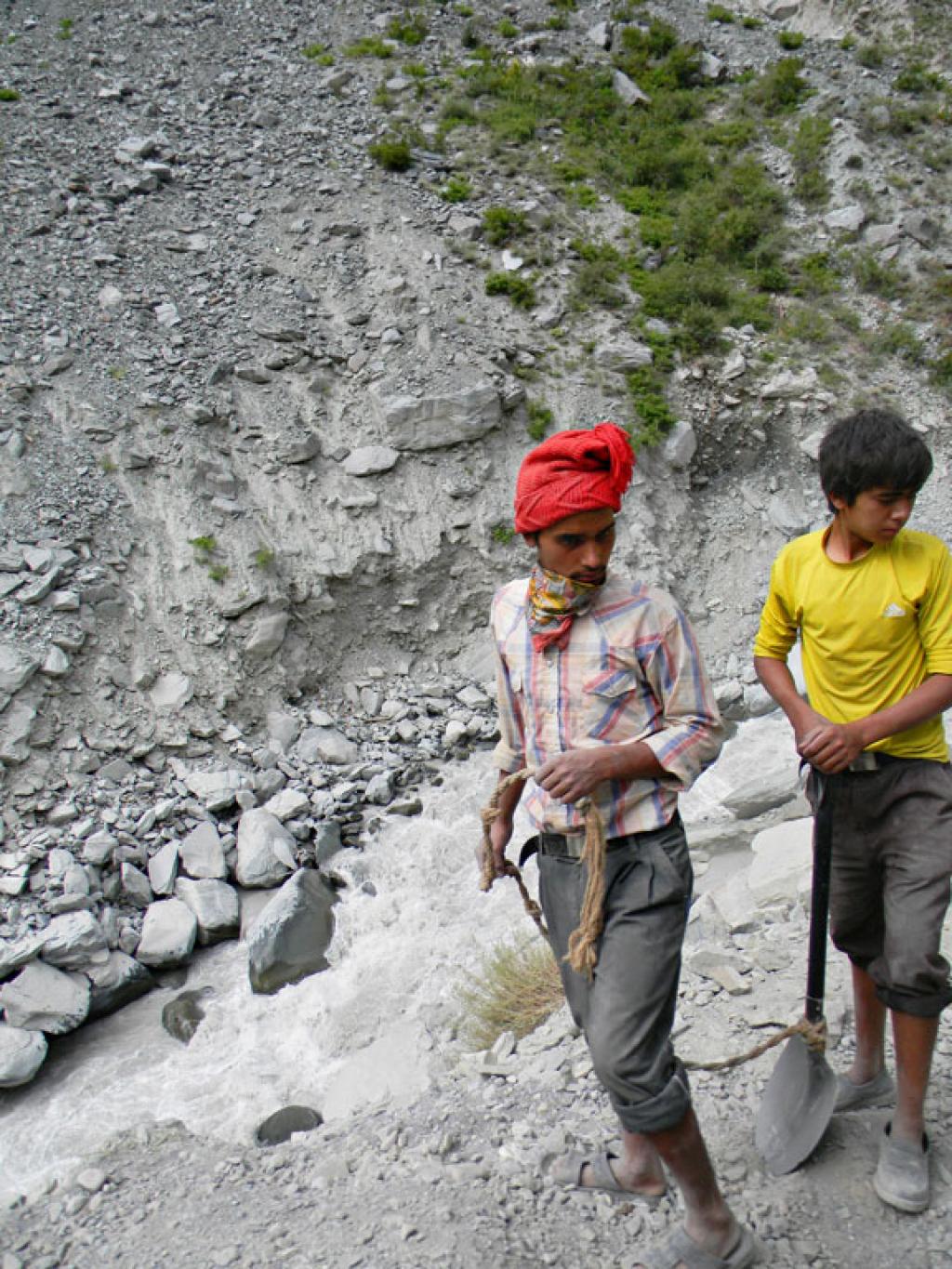 Of the 23 people who died during the floods most were migrant labourers who are the most vulnerable because of lack of adequate shelter & safety mechanisms.Children working as daily wagers in Ropa valley. 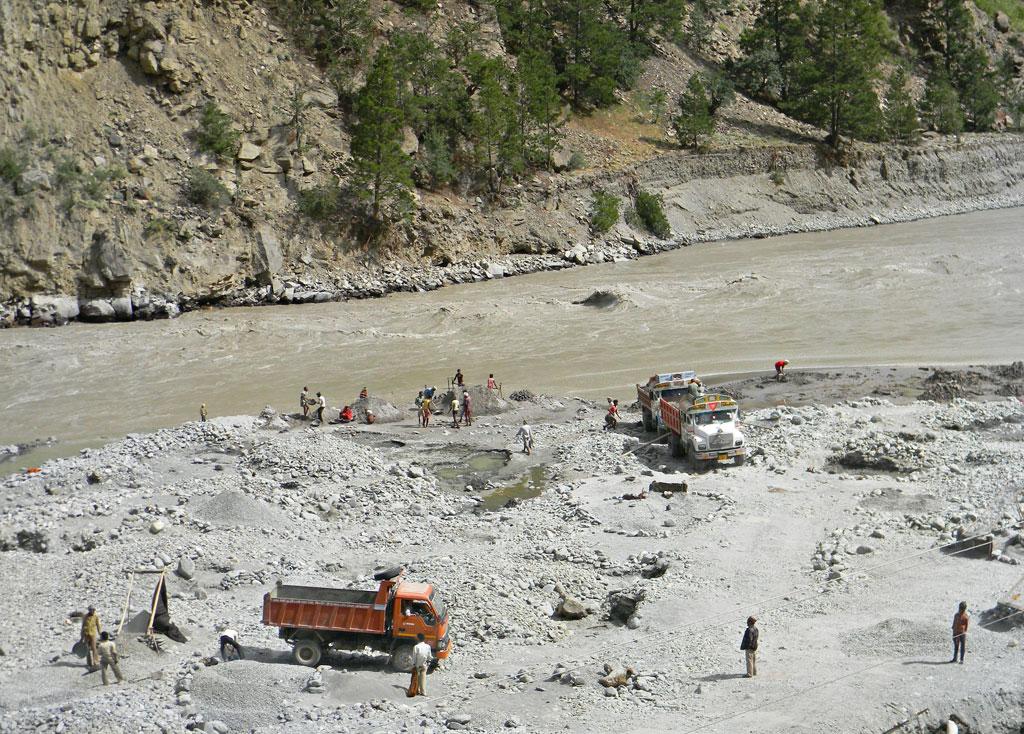 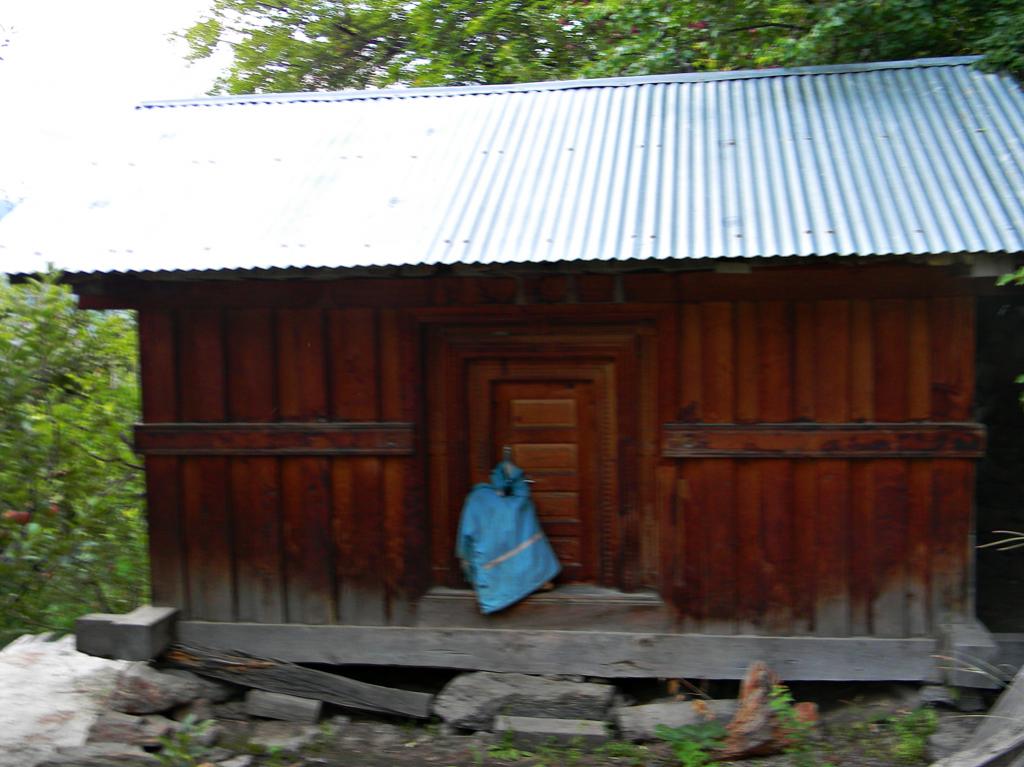 Urch is a traditional grain storing structure which had fallen to disuse overtime.During the June rains some villages like Pangi have revived the use of this. 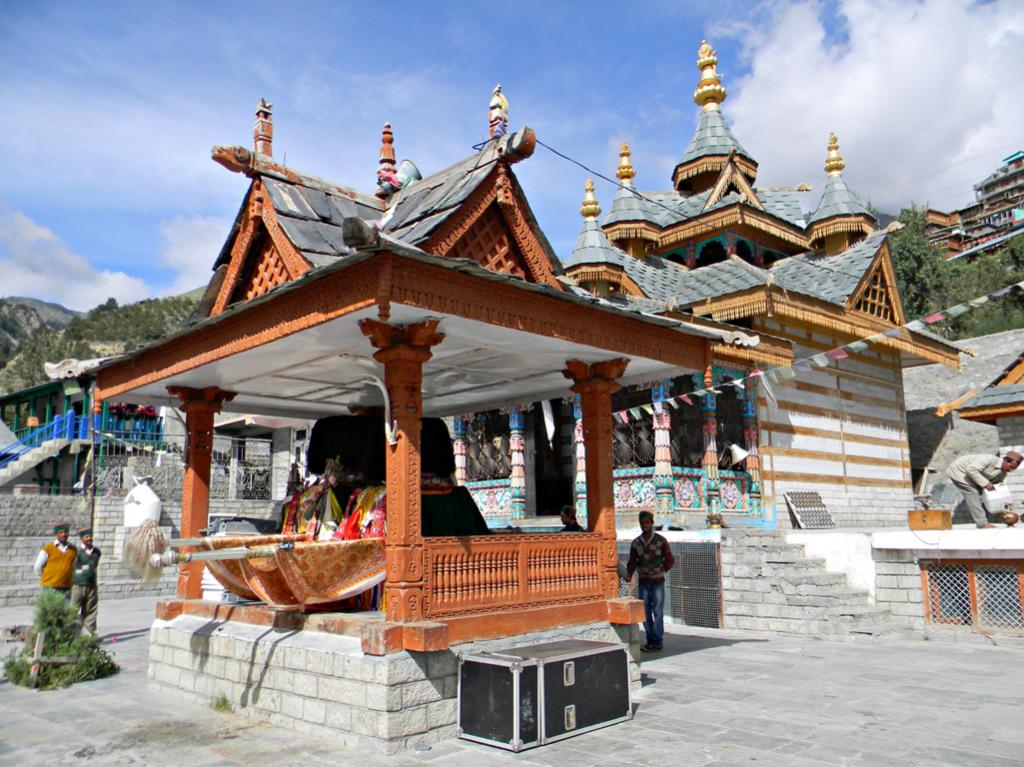 Prepartion for a local pooja at Lippa village.In response to the calamity many of the villages invoked their local deities or Devtas to help them cope & devise means for survival. 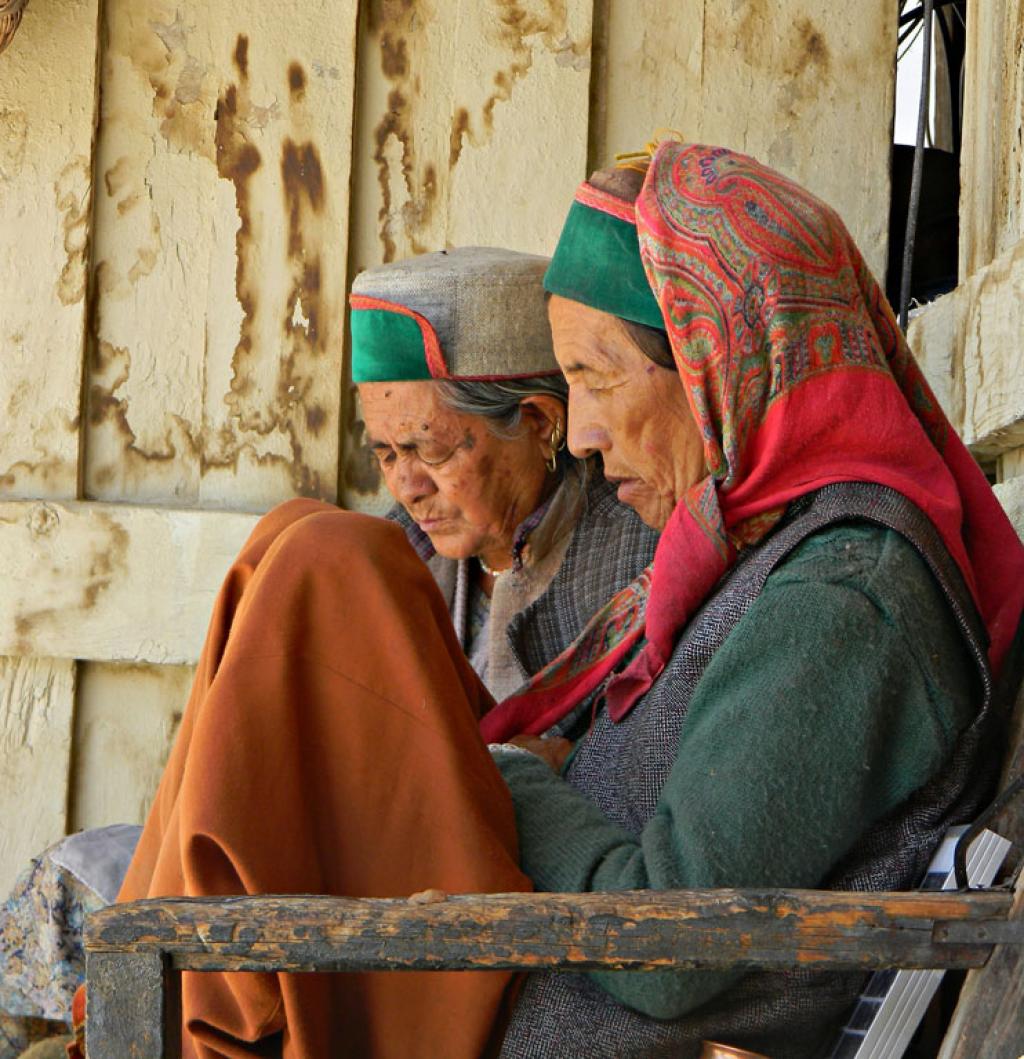 Kinnaur is a schedule V area .It is unique for its culture,terrain & ecology.Many older people feel that June calamity brought hope with despair, for now people are thinking about what 'development' really means.