'Clean environment has to be a fundamental right'

For more than four years now, Narayan Belbase, an environmental public interest lawyer, has been working towards facilitating and mainstreaming environmental governance and justice in Nepal's new Constitution. The author of over a dozen books on environmental policy, legislation and gender justice speaks to Aditya Batra on his efforts to make the right to clean and healthy environment a fundamental right of citizens 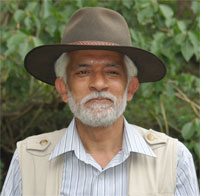 What has been your role in pushing for green provisions in Nepal's new Constitution?

My role has been to sensitise members of the Constituent Assembly on various environmental aspects and push for green provisions to be included in the new Constitution being drafted by them. In fact, right to clean environment has been included in the Interim Constitution as a fundamental right for the first time in the history of Nepal. This became possible because of the efforts made by other like-minded individuals and far-sightedness of the president of the Interim Constitution Drafting Committee, the late Laxman Prasad Aryal.

Why are you pushing for environment as a right in the new Constitution?

Clean and healthy environment is essential for the existence of human beings and other species. It is a must for conservation, access and sustainable use of environmental resources, services and goods. Living of more than 85 per cent of rural Nepalese people is directly dependent on these resources, services and goods. The fundamental right to live in a clean environment is also useful in securing a pollution-free environment for people in urban and suburban areas. It is required for preventing and controlling destruction of resources, such as trees, plants, wildlife, water and wetlands as well as keeping them healthy.

How do you see the relationship between rights and environmental justice?

Even though Nepal has been constitutionally declared a federal republic, women, the elderly, dalits, indigenous communities, landless people and religious minorities are denied equitable access to environmental resources, goods and services. We have therefore suggested the new Constitution should include the provision that the “poor, women, dalits, indigenous communities, and religious minorities, shall have right to equitable access to and sustainable use of environmental resources, services and goods” as a fundamental right. Till date, those with economic and political power have controlled environmental resources. If the right to equitable sharing of benefits is not made a fundamental right, it would be unjust to communities that have preserved the rich biodiversity of this country.

I believe that right to information and right to participation ensure people’s free and meaningful participation in environmental decision-making process. If these procedural rights are not guaranteed by the new Constitution, people will hardly be in position to claim and enjoy substantive environmental rights and justice. The procedural rights can be taken as means to achieve the end—substantive rights.

My definition of environment includes all natural, cultural and social systems, economic and human activities and their constituent parts and also the interaction and inter-relationship among these parts. If we use the phrase natural resources it would be too limited.

Won't these provisions burden the government, administration and the judiciary?

You are right. However, it is high time that we protect our pristine environment first and then utilise its resources, goods and services in the best interest of the poor, women, dalits and indigenous communities. We have witnessed how environmental resources have been exploited in the name of development for fulfilling vested interests of the handful of economically and politically powerful. It needs to be stopped once and for all through the Constitution. If we do not prevent and control the destruction of the environment now, the cost of cleaning the environment after it has been degraded would be much beyond the capacity of Nepal's weak economy.

This is going to be Nepal's sixth Constitution in about 63-65 years. How will this be different, and how different will it be from the Interim Constitution?

In many aspects it is going to be different in comparison to the previous ones. This is the first time people's representatives have been drafting the Constitution. At the same time, as Nepal has been constitutionally declared a federal republic, it is expected that there would be more devolution of powers and functions to the provinces and local governments.

What is your assessment of the political acceptance of your recommendations, given the present composition (various political factions) of the Nepal government?

Members of the Constituent Assembly, representing almost all the political parties, have attended the interaction and other programmes we have organised. I have already seen some of the members working hard to incorporate some of the provisions in the preliminary draft of their respective thematic committees. However, I am not that sure about the receptivity of those provisions among the central committee or politbureau members of different political parties.