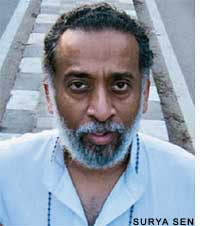 There is a political process to public policy. Does corporate lobbying go against that democratic norm?

There is always the juxtaposition of parties within the state process. There will always be individuals or interested parties. I would think the interested parties are unlikely to be corporates. They are likely to be associations or individuals with a particular viewpoint. It is very rare in the way that our democracy is structured to have corporations as part of public debate. I am not sure if this is a lacuna in the way corporations are structured or a commentary on the way our democratic bodies are structured.

Are you suggesting that lobbying is a mechanism to represent corporates?

I don't think it is representing corporates. Let's take an example. Argentinian farmers want to sell wheat to India and there are various voices around the issue related to biodiversity, nutrition and trade. Of course, there are Indian farmers who have a different take on this. But the state has no mechanism in which Argentinian farmers can address Indian consumers. Only communication will help them sell their case.

Take a different example. Health experts say artificial sweeteners and fast food are bad. But marketers want to continue the business and keep legislation at bay.

I don't see much effort by them to keep legislation at bay. In fact, it is the weakness of the institutions of the state that are lethargic and cannot absorb the balance of scientific evidence. Often it is the convenience of continuity of existing practices that allows corporations to carry on. If the state brings in appropriate legislation quickly enough, the companies will be the ones to adjust fastest because they are driven by profit-motive. There is too much space for the minutiae of debate which is not democratic; which is scientist versus scientist.

Absolutely. Debates are always artificial constructs. But the point is that if it is, say, Galileo's view of the planetary system, there is always a state science and there is always a naysayer. And if the naysayer is powerful enough, heresy gets converted into fact or accepted as logic.

But when a corporation gets into lobbying there is a fight between public interest and public relations.

Where is the public voice in this game?

The public voice did not use to have a mechanism for expression. Now increasingly, with new technology, if you are not poor you have a means of raising your voice. But the problem is that even the public is largely passive.

When lobbyists are influencing elected representatives should there be regulations?

Regulation always creates room for twisting a process. Regulation is never the answer to a process which is not hidden. As long as public relations and lobbying play in the open less regulation is better. I think that the vehicles of public-policy making should be in the public domain. Thanks to people who have pushed for legislation like rti, lots of issues are coming out in the open. There is a strong case for the government to use public-relations organizations.

You think lobbying is an honest effort.

I am not saying it is an honest affair, but regulation is not a good way to bring honesty into the affair. What is needed is to bring fresh light and allow openness in public debate and allow wider participation rather than controlling and confining it to fewer participants.

Do you think lobbying can be effective if done openly?

I think effective lobbying is what is happening out in the open. What happens behind dark curtains takes place because our political process is thwarted by micro-interests, which have bigger voices than they deserve. Micro-interest groups manipulate political processes through give and take.

Do you have in-house dos and don'ts, certain briefs that you won't take?

We are not interested in anything that requires the tactics of corruption and bribery. One of the reasons is that we are middle-class professionals. Freelancers are very effective in that business.

Is there any industry body of public relations and lobbying?

I am sure there are some. I think the Public Relations Council is quite active. But if you are talking about lobbying specifically, it is still emerging as a science. Forget its functionality.

Who would manage this grey area?

Grey areas ought to be managed by the practioners themselves and this is not a call for a self-regulatory body. The profession should be kept unlicensed. The successful practioners are out in the open, and you know who they are, so they are under public scrutiny.

Biscuit manufacturers are lobbying to promote fortified biscuits instead of cooked meal for poor children.

I am in favour of cooked meal. I've been promoting the case actively. This is a case where public interest can force an issue despite lobbying by the other side.

The wonderful thing about Indian democracy is that we get what we deserve. Many of these mps represent constituencies who are not interested in those issues. That's a sad fact. So they represent whosoever tells them, "Boss yeh forward kar do (Boss, please forward this)." If you really want to see a participative democracy, you should see the Westminster style of democracy, where members of parliament literally quake when they have to meet their constituencies, which they have to do daily. They have to inform their constituencies why they push a case, and record it. In the absence of scrutiny we are trying to find a cheap way around. The liberal mechanism in the country says we can't control politicians, so let us try and control the rest of society.

What is American style of lobbying?

We think of it as large lobbying firms who work for the interest of Iran or the aviation or armament industry. But there is a huge underbelly. American style lobbying is not well understood in India. The process of American democracy and Senate hearing you see in C-Span are a testimony to the working of an open democracy. What happens in Capitol Hill is not an example of how it can happen in India because the nature of our political process is different.

How do you see politicians' role? A company has the advantage of professional help when lobbying against a genuine local resistance. Communities have nothing.

I think it is because of the weakness of the political process. If protests had numbers which translated into votes, I don't see a local legislator being bought over by a lobbying company.

But it is happening.

It is happening because he knows that the people who are protesting don't vote or the trade-off in money is big enough for him to lose in the next election.

How much would you charge a tribal community if it, say, wants the new mining policy repealed?

If I understood the issue, I would be happy to work, as I have done pro bono in the past, on a cost basis.