John Gordon believes a song can get people thinking. He spends the better part of a year teaching musicians from Australia’s aboriginal communities modern recording techniques. An experience that brought him in touch with environmental problems. Ruhi Kandhari caught up with the protest songwriter who was in Delhi to promote his song, Australia—Whore of the world 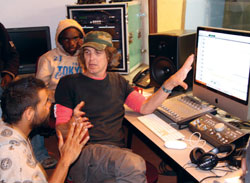 Why a song on mining?

I am a trained environmental engineer, so I always wanted to write a song on environmental degradation caused by mining in Australia. I am not sure why I did not write it before, but it is an opportune time as mining is expanding in the country. Coal mining caught my attention as Australia is the biggest coal exporter. And it is coal that is heating up the planet. I won’t feel good if I don’t write about it.

What is the focus of your song?

Like I said in the song, We are shipping it out and no one says anything…, not many people seem to realise the consequences of mining and exporting coal, as it is a big money spinner. Through the song I want to send out the message that Australia being the largest coal miner and exporter should bear some responsibility for climate change. It also has a message for other countries: don’t buy our coal. I came to India to spread the message because it is one of the top five importers of Australian coal. On its way to becoming a global power, India is also considered the fastest growing coal importer.

How do Australians react to mining?

We call ourselves lucky as we have a lot of mineral wealth. But mining has become indiscriminate in the past couple of years. Mining companies can claim any piece of land they like in Australia. Earlier, most coal mines in Australia were confined to sparsely inhabited areas. But now for the greed of royalties the government is allowing indiscriminate mining—on farmlands and in populous areas. And the impact is evident.

For instance, there is a place called Hunters Valley, just on the outskirts of Sydney. Mining for coal has spoiled the landscape. Pollution levels are high there. Residents of the valley are protesting against mining.

Australians are naturally easygoing. But of late, an uprising against mining companies is taking shape. People who share distrust of mining companies are getting organised. As far as displacement goes, throughout history aboriginal people have been displaced because of mining; wherever they go mining companies push them to another place.

What is the environmental impact of mining in Australia?

It is similar to that in India. While working with the aboriginal people of central Australia, I have seen mining giants approaching them to get their forestland and then riding roughshod over their culture. The government also covers up the impacts of mining. In Queensland, for example, there are several old mines that cause lead pollution. According to the Medical Journal of Australia, a child gets exposed to lead poisoning every nine days. But when I worked with the environmental department of the state government, it was always covered up. The government has been denying for years that mining is the reason behind air and water pollution in the state.

As a former environmental engineer with the government, I have seen mining becoming a rule in itself because the government wants to encourage it. Polluted waterways and land degradation are common at mining sites but the government does not police or punish companies as they pay hefty taxes.
Interview Interview Water Pollution Tribals Pollution Mining Mineral - Based Industry Land Degradation India Coal Coal Climate Change Australia Air Pollution
SUPPORT US