Don’t tame the Brahmaputra, train it

A worried Assam government recently asked river hydraulic engineer NAYAN SHARMA of IIT Roorkee to devise ways to contain the mighty river that causes floods and erosion every year. BHARAT LAL SETH spoke to Sharma on how he aims to do it 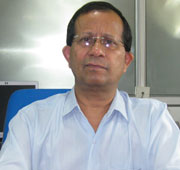 Why is the river so notorious?

Assam has lost about 170,000 hectares to the Brahmaputra and its major tributaries between 1990 and 2007. These are mostly prime land such as tea gardens and the economic loss is phenomenal. The problem is the Brahmaputra transports heavy sediment load—about 800 million tonnes during floods. Quite a good amount of this sediment gets deposited in the riverbed as the flood recedes and the river flows through multiple channels. For instance, 30 km downstream of Guwahati, the width of the river increases from 1.4 km to 22 km. Sand deposits, or islets, create multiple channels in the river, reducing its velocity. This increases incidences of flooding and overtopping of embankments, making it difficult for engineers to manage and control the Brahmaputra.

How would climate change affect it?

I, along with a few European scientists, recently prepared a climate model that helps estimate the climate change impacts on the water flow of rivers originating from mountain peaks.

Taking into account the worst scenario predicted by the Intergovernmental Panel on Climate Change, Tibet would witness a temperature rise of 4.5°C and Assam could be 2.5°C warmer by 2080. This would increase the glacial melting in Tibet and raise water flow in the Brahmaputra.

Our model predicts water flow in the Brahmaputra would increase in the first three-four decades and reduce towards mid-century. The state would face longer dry periods and more intense wet periods, which would cause sudden spurt in the water flow.

How would you tackle the problem?

Existing river training techniques in India, such as spurs (large stones bound together to protect banks) and embankments, are capital intensive, with high maintenance cost. They cannot be installed all along the river. Moreover, they are not geared to train the river.

Our prime focus is to install river training structures that would help deepen the channel and reclaim eroded land from the river. We plan to deploy a combination of submerged vanes, jack jetty and board fencing.

Submerged vanes are made of steel plate, reinforced cement concrete (RCC) slabs, wooden planks or bamboo poles, and are laid out along the bank on the riverbed at a designed spacing. This helps generate secondary flow spirals, which induce sedimentation on one side of the vanes and help deepen the riverbed on the other side. The jack jetty, which is a framed structure made of three steel or RCC columns, breaks up the erosive flow of vortices and induces sedimentation along riverbanks. Board fencing also retards the flow and prevents riverbank erosion. It is a structure of wooden vertical poles joined with timber boards.

These techniques are cheaper than the existing techniques and can be installed all along the river. Protecting one km of riverbank with spurs would cost Rs 7-8 crore. Submerged vanes and jack jetty would cost Rs 2 crore. These techniques have been gainfully used in American rivers. Last year, I installed submerged vanes at eight sites in the Ganga, between Varanasi in Uttar Pradesh and the Farakka barrage in West Bengal. At the site near Varanasi, for instance, the navigation channel has deepened.

How long will it take?

The Assam government has forwarded the concept paper to the Ministry of Water Resources. I await the go-ahead from the Centre.