"The world needs a new work culture, not just jobs"

Austrian-born Frithjof Bergmann, a professor of philosophy at the University of Michigan, USA, founded the Center for New Work in 1984 to help workers deal with the "dysfunctional job system". His philosophy later came to be called the 6 months-6 months proposal. Bergmann has worked with individuals and communities across the world and is planning to open a centre in India soon. He talks to Vani Manocha about how following one's calling and getting involved in community work can reduce unemployment in India. Edited excerpts 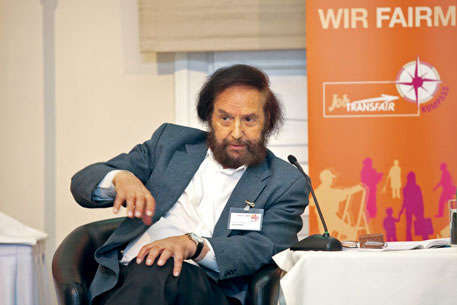 What is the inspiration behind your foundation?

Today, the whole world is worried about increasing dependence on machines and shrinking jobs. But this could also be an opportunity to get away from work that can only fetch us money and do things that we actually care for.

The idea of New Work New Culture (also called New Work) was born when I travelled to East European countries like Ukraine and Hungary in the 1970s and 1980s. I saw people in these communist countries devastated after industrialisation had taken over. It was then that I decided to invent a culture that would neither be communist nor capitalist. Later, I formulated the ‘6 months-6 months’ proposal. According to this, for six months people could engage in their regular jobs and earn money and in the remaining six months of the year, they could volunteer for community jobs like teaching or farming. Although this sounded a bit unrealistic, I was surprised to know that people actually wanted to be involved in such kind of jobs. This discovery, nearly 30 years ago, was central to the idea of New Work New Culture.

But the situation in modern times is different and the ‘6 months-6 months’ culture may not be so relevant now. Today, technology and community efforts should not only be used to speed up work and build more machines but also lead to innovations where machines do the boring, repetitive work and humans do all creative work so that maximum people can be employed. New Work New Culture, therefore, is an attempt to allow people, for at least some time, to do something they passionately want to do.

What did the idea of 6 months- 6 months mean and has it been practically applicable?

In the early 1980s, General Motors (GM) announced that it would automate in an extraordinarily thorough fashion its plant in Flint, a city in the US’ state of Michigan. This meant that nearly half of the people from the city, employed with GM, would be laid off in the process. This is when we opened the Center for New Work there in 1984, and proposed that instead of splitting Flint—half of it becoming unemployed and the other half working overtime—why not let all the employees work in the factory for six months each. And during the other six months, make it possible for them to do what they passionately wanted to do. Later, we spoke to thousands of people in the US on the ‘new work’ philosophy—some started small businesses; some went back to school, while some decided to spend more time with their children.

The idea was that if people can be encouraged, empowered and trained in skills to do things they wish to, they would leave a positive impact on society and culture and would actually be able to call themselves free. The people who followed this were also able to get involved in community work.

You are planning to open a centre in India soon. Which problems will drive your work here?

Unemployment is a serious issue in India. For a country with a population of over 1.2 billion, it might never be possible to create equal number of jobs. Hence, a new work culture—not only jobs but work—could be the solution. For example, India has a pool of advance technologies and dedicated engineers. Together, they can generate electricity for themselves in small communities. To become self-sustainable, people can grow food in their houses. Growing food closer to a consumer will not only make it pesticide-free but also easily available. I believe the only way not to feel threatened about losing jobs and scarcity of resources is to realise that if need be, you can produce things on your own. Though New Work has a long way to go, ideas from the youth in India have really encouraged us.

What are the challenges you anticipate in India?

I have spent a considerable time in this country and have been able to interact with students as well as professionals with the support of my friend Anil Saldanha, a social entrepreneur in Maharashtra. My experience and networking in India show that there is a lot of despair and discouragement here. There are people who do not have jobs, but they have ideas. They wish to be self-sufficient and get involved in community efforts but societal pressures restrain them.

However, I see a strong similarity between the philosophy of New Work and people’s desire for self-reliance and sustainability. This could be our strength in India. Saldanha has initiated small community enterprises in the state. For example, sugarcane juice vending machines that use peddler instead of diesel engine are being encouraged to save the environment along with generating work opportunities.

How feasible will it be to turn the philosophy of New Work into reality?

In a few years from now, the world will only need half of its population to produce whatever it needs. That is when more and more layoffs and economic recessions are likely to happen. Companies and unions will then have to invest money to make ‘new work’ possible for all those who lose their jobs. It is then that financially profitable New Work enterprises would become the norm. As far as financing is concerned, strategies like crowd-funding will play a major role.

My friend and a New Worker Jamal Mustafa Siyaj strongly believes that across the world, there are many people who work for 16-18 hours; meanwhile, there are several others who do not have any work at all. Sharing this workload and creating a balance could bring in economic sustainability in future. He proposes the practice of people being engaged in jobs for 11 months and community work for one month, gradually making it jobs for 10 months and other work for two months and so on.

This idea, however, will take time to materialise. Also, organisations will have to play a crucial role here and practise more social responsibility. Technology can be put to its best use to achieve such a society. For example, one could generate electricity on a rooftop to run one’s car, thus reducing dependency on external resources.

Moreover, by involving more people and community services, we could get jobs done much cheaper.