The fall of the Aztecs: What lessons does it offer 500 years down the line

Down To Earth talks to historian Camilla Townsend about what the Spanish Conquest of the Aztecs means, especially to indigenous people in Mexico and around the globe 500 years later 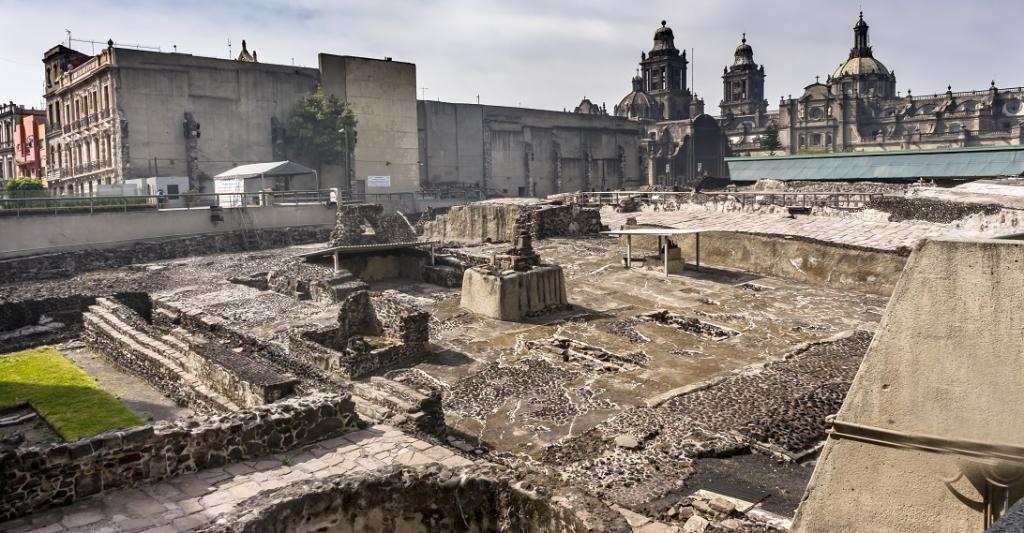 The Metropolitan Cathedral in Mexico City besides the ruins of the Templo Mayor. The Aztec temple stood from 1325 to 1521, when it was destroyed. The temple stones were used to construct the cathedral. Photo: istock

Half a millenium ago, when Spanish forces led by Hernan Cortes conquered Tenochtitlan, the capital of the mesoamerican Aztec Empire on August 13, 1521, it was home to 150,000 people. It was one of the great cities of the world though its inhabitants lived in a restricted geography.

The Aztecs had reached the spot where Tenochtitlan stood in 1325, after having wandered from today’s southwestern United States. They were a Nahua people and spoke Nahuatl, one of the Nahua languages.

In 1492, the Spanish, under Christopher Columbus had landed in the nearby Caribbean and had set about enslaving the native people of the area, the Taino. In 1519, Cortes, who had heard of a large and prosperous empire to the west, landed on the Mexican coast.

For the next more than a year, he was able to take over the Aztec Empire by deposing the ruler Moctezuma. Until the Aztecs revolted and the Spanish had to flee the city on July 1, 1520.

The Spanish regrouped and laid siege to the city on May 22, 1521. Its capture was the first big European victory over native peoples during the Age of Discovery and heralded the start of European colonialism.

Camilla Townsend is a historian at Rutgers University in New Jersey, US. Her most recent book, Fifth Sun: A New History of the Aztecs, presents Aztec history in the language of the people themselves by drawing on sources in Nahuatl, their own tongue. She turns many long-persisting theories derived from Spanish-language sources on their head. The book won the 2020 Cundhill History Prize for history.

Down To Earth (DTE) caught up with Townsend and asked her about this meeting of two different worlds. DTE also asked her about the takeaways from the siege and conquest of Tenochtitlan 500 years later, especially for Mexico’s and the world’s indigenous peoples. Edited excerpts:

Rajat Ghai: Did the fall of Tenochtitlan set the template for European-native interactions throughout the Americas and the rest of the planet? 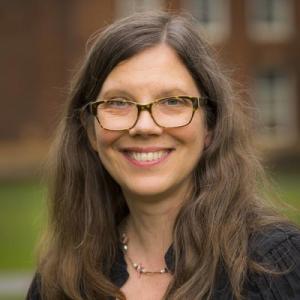 Camilla Townsend: I tend to think that the pattern was established when Christopher Columbus landed in Hispaniola in 1492.

Of course, some specific elements emerged for the first time in the war against Tenochtitlan. This was because it was a large and complex city with a standing army.

But the basic pattern was established in the Caribbean. In fact, one element of that story which is not known, is told by a historian named Nicolas Wey Gomez in his book, The Tropics of Empire: Why Columbus Sailed South to the Indies.

He has shown that there were people in Europe, among them Columbus, who had begun to realise that their knowledge of the world gleaned from ancient Greek and Roman texts was wrong. There were people far to the south of Europe.

The stories brought back by the Portuguese from the coast of Africa proved this. These Europeans then began to say: “We could conquer these people”. Columbus was sailing to find India and China. But he was also sailing not just to trade but also to conquer.

They did not think they would conquer India or China. But they thought they could at least conquer native people. Conquest was on top of their minds.

If you look at the papers King Ferdinand and Queen Isabella of Spain gave Columbus, they not only said: “You can trade”. They said: “If you conquer, you can be governor of those territories”.

So I think the pattern began in the Caribbean. But it was cemented in Mexico.

RG: Did the Spanish Conquest of the Aztec Empire cement the false (European) view that native peoples were ‘uncivilised’, ‘primitive’ or even ‘inhuman’?

CT: Tenochtitlan made it easier for Europeans to make such an accusation. Europeans had long said the people they wanted to conquer were probably cannibals, that they were low, undeveloped and uncivilised.

But the Mexica or the Aztecs made this easier because they really did practice human sacrifice. The priests really did touch the blood of victims to their lips.

There is a great deal of exaggeration. The Aztecs did not begin by sacrificing many people. They did what most ancient peoples did around the world. They sacrificed an occasional prisoner of war. This was very normal. Archaeology shows that happening in most places around the world.

But as they gained power, they wanted to terrify their neighbours so that they could keep this power. So, they turned this element of their religion into a power play.

One of the sources that I have read in Nahuatl, the Aztecs’ language, said: “We used to do this. We would kidnap someone from the area that we wanted to conquer, bring them to see the (by then) terrifying celebrations and then let them go”.

This was done so that such people would go home and tell others that they should just join the empire and not fight. Because if they fought, some of their people would be sacrificed.

So, we must understand that while it was an element of their culture, it became big only towards the end since they used it politically as a power play.

The Europeans did not know all this. They just said: “These people believe that we must eat other people. So, they are savages and we must conquer them”.

That made it easier for them as Europeans to say that elsewhere — even if it was not true — too, native peoples were like this. This became a very convenient excuse.

RG: How did Europe being a much older, settled agrarian society give Europeans an edge in all their wars with indigenous peoples?

This was only figured out in the 1990s when radiocarbon dating techniques improved. They improved so much that for the first time, archaeologists could know where a plant first emerged and where it then went through long distance trade.

For instance, the first civilisations started in the Fertile Crescent of West Asia. Why? Because people there found that they could grow wheat and peas, the most nutritious crops then, full time and gain enough protein to give up hunting animals.

You must be settled and sedentary to develop a great civilisation. If you are only hunting and gathering and moving around, you are not going to invent an alphabet or build a great castle.

Subsequently, civilisations began in south Asia, China and Europe too.

In the Americas, they did not have plants that were as protein-rich. Corn had very tiny kernels and was not very nutritious. But eventually peoples in the Americas realised that if we eat corn the same day as we eat beans, we are full.

So eventually, they did become full-time farmers. But 3,000-5,000 more years had passed. The Aztecs did develop a complex civilisation but it was like the ancient Mesopotamians or Sumerians.

They were smart. But they could not defeat Renaissance Europe. It was not possible.

This is what we see in the Americas. Nobody had been farming as long as Europe and Asia. If the Chinese or South Asians would have come, they too would have won.

Those who have been farming, have more weapons, populations and diseases. 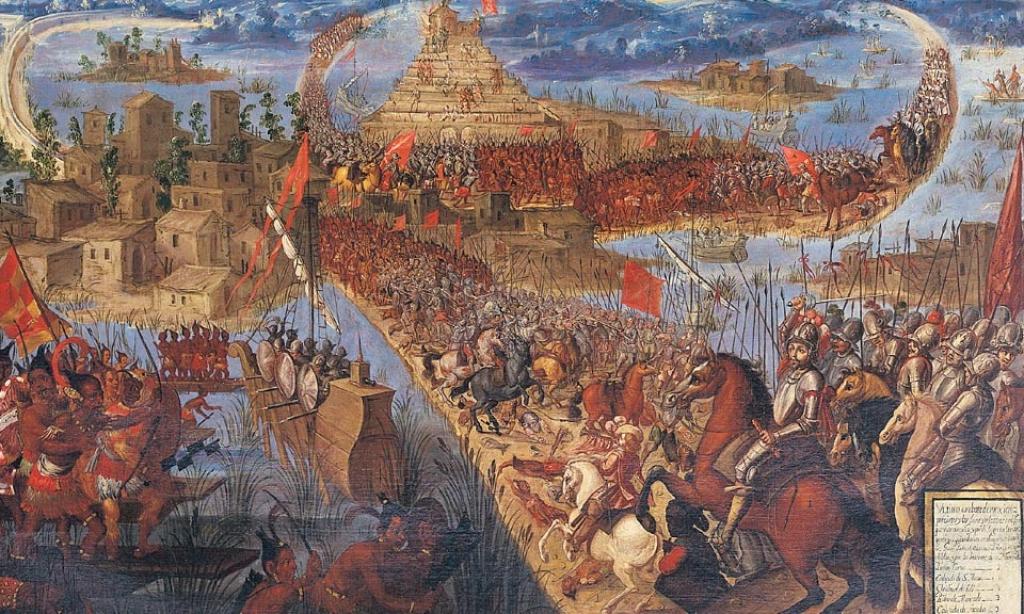 "Conquista de México por Cortés", a painting by an unknown artist in the second half of the 17th century. It hangs in the US Library of Congress in Washington, DC. Photo: WIkipedia

CT: I think that is true. It is also true that the situation now is very complicated. Nation-states can exploit such people even if they are settled farmers. My government has done horrible things to people in Latin America, who were farmers.

But you are right. Many people who are practising indigenous ways of life are pastoralists or hunter-gatherers and that makes them more dependent on others who have industry, money and resources. So, the issue has not completely gone away.

CT: It is essential. Because without it, we can never really know what they were thinking. The Aztecs provide us with a very rare window into a past civilisation because they wrote all about it while their elders were still alive.

Young Aztecs wrote their own stories after the conquest by learning the Roman alphabet from Spanish friars, even as the last pre-Columbian generation was alive.

If that would not have happened, we would make guesses from archaeology and what the Spaniards said. That is what scholars have been doing. As a result, we have a very distorted view of the Aztecs.

RG: Half a millennium later, what are the major takeaways from the conquest of Tenochtitlan?

CT: Two things for me. On the one hand, I want all the descendants of indigenous people, especailly in Mexico, to know what their ancestors were thinking. How powerful they were before the Europeans arrived. How hard they fought. How funny and clever they were in the things they said and wrote.

This would help as many of them are poor and experience shame and humiliation.

On the other, I wish more people would know how such a once-proud people were reduced to today’s penury. That would be by reading the works of sociologists and economist, rather than my own work.