Financing emissions from jets and cows

Environmental scientist Robert Goodland , who served the World Bank Group between 1978 and 2001 is credited with authoring some of the Bank's environmental safeguard policies. He helped create the World Commission on Dams. In an e-mail interview, he tells Ranjan Panda that the Bank has become obsolete on sustainability issues 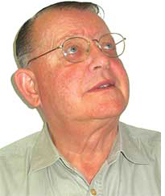 What has been the World Bank's track record on mitigating climate change?

The Bank should be doing almost the opposite of what it has been doing. It must give up its credo of maximizing growth. By continuing to finance so much coal, so much livestock and so much deforestation I can't see the World Bank helping in mitigating climate change. In fact, the World Bank Group refuses to make public the amount of ghg emissions it finances.

In July this year, the Bank's watchdog, the Independent Evaluation Group (ieg) published a devastating critique which showed how the Bank is hurtling away from sustainability. The institutions that constitute the Bank are divided on policies. The International Finance Commission (ifc) privatizes profits while spreading costs of environmental damages to the society as a whole. In contrast, the International Bank of Reconstruction and Development seeks to internalize environmental costs but it has a lot to do on this front, according to the ieg.

Has the Bank abetted GHG emissions in other ways?

Yes, absolutely. Besides coal, the Bank finances three other top sources of ghg emissions highways, deforestation and industrial livestock. Transport accounts for 25 per cent of global ghg emissions and it is the sector where Bank funding is most skewed. Seventy five per cent of its finance in the sector goes to highways, against 7 per cent for railways--it should be the other way.

The Bank's year-old but still secret Amazon strategy seems to be to replace the forest with agrifuels, livestock and industrial logging. ifc has recently invested in more than us $2 billion in industrial livestock, the second biggest emitter of ghgs.

In India, ifc has invested in the us $54 million Modern Dairies project. The project manufactures cheese in India and flies it to Japan to supply the Pizza Hut chain. There has been no assessment of the project's emission risks. Instead, an arm of the Bank has financed methane emissions from cows and carbon emissions from jets--one of the most potent combinations of exacerbating the global food crisis and climate risks.

Has the Bank been reckless in supporting agrifuels?

The World Bank Group has financed the expansion of palm oil plantations in South East Asia, though they are the leading drivers of deforestation in the region and a globally significant contributor to climate change.

ifc finances two huge soy monocultures in Brazil's Amazon forest region, despite being reprimanded by its own ombudsperson. Much of this soy is converted to agridiesel.

In March 2008, ifc financed the Usina So Joo cane sugar/ethanol project, also in the Brazil's Amazon forest region. Now that Amazon forest sugar-ethanol has been legitimized by the World Bank Group's seal of approval, the us agribusiness group, Bunge Ltd, is investing us $639 million in constructing three massive distilleries in forests in Tocantins in Brazil.

The World Bank Group claims it is working on a methodology to account for ghg emissions, but that sounds years away.

Do you suggest that for the Bank greenwash and censorship are more important than climate change?

Greenwash and censorship is quite rife in the World Bank Group. The Bank's president, Robert Zoellick, has appointed, as his top pr adviser, a former colleague who staunchly defended suppression of scientific views on climate change. This appointment is in line with news reports that the Bank's senior management censored internal reports on climate change and on logging in tropical forests.

The Bank certainly needs fresh thinking. Its staff pay only half the market rate for parking their cars in Bank garages. These heavy subsidies discourage use of mass transit, thus further increasing ghg emissions.