Nepal’s Forest Act of 1993, which allows communities to manage their forests, is admired and emulated by governments and movements across the world. The government now plans to amend the Act. Apsara Chapagain, the first woman chairperson of the Federation of Community Forest Users, Nepal (FECOFUN), tells Aditya Batra that the proposed amendments would jeopardise forests and the welfare of millions of forest-dependent people in the Himalayan country. Edited excerpts 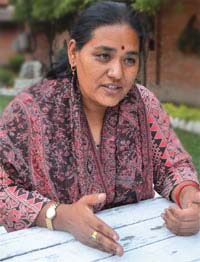 Why are you opposed to the proposed amendments to the Forest Act?

The Ministry of Forest and Soil Conservation wants to amend the Forest Act of 1993 because the Master Plan for forestry under which it was enacted, expired two years ago. Talks on amending the Act started at a high-profile Cabinet meeting held at the base camp of Mount Everest in 2009. At the meeting, Prime Minister Madhavpur Nepal and forest minister Deepak Bohra announced that there is a need to conserve the country’s forests, linking it to REDD (Reducing Emissions from Deforestation and Forest Degradation). It was too stupid an idea. That’s not the real reason either—by extending the area under conservation, the government wants to control the forests.

The existing forest Act is democratic. It safeguards the rights and sovereignty of communities. Under the Act the government handed over vast tracts of forests to communities to manage. But as the demand for community-managed forests grew, the government felt it was losing control over the national resource; it felt it was losing power. The proposed amendment aims at a bigger role for forest officials in community forest users’ groups (CFUGs) and restricts community invelovement in managing valuable forests, such as those in Churia hills near the terai region. They also propose to hike the contribution of CFUGs to the central treasury from 15 per cent to 50 per cent.

We strongly opposed these measures and organised protests across the country. I met senior political leaders from major parties. In fact, the draft goes against the 2000 verdict of the Supreme Court, which had held it illegal for government to collect revenue from CFUGs. An inter-ministerial group had also sent the draft amendment back to the forest ministry. Still the government persists. It tried to bypass such opposition by issuing a raj patra (government order) to collect 15 per cent of the revenue earned from the sale of sal and catechu (khair).

Many committees were set up by successive governments but the issue remains unresolved because of political instability. We want the government to create a committee, involving CFUGs, non-profits, media and legal agencies, for reviewing the draft.

CFUGs already use their funds for community development activities, such as constructing roads, education institutes and health centres, providing electricity, drinking water and sanitation facilities, and supporting income generation activities. The forest Act mandates 25 per cent of the revenue earned by a CFUG is to be used for forest protection, 35 per cent for poverty alleviation programmes, while the remaining funds can be used as the CFUG decides. 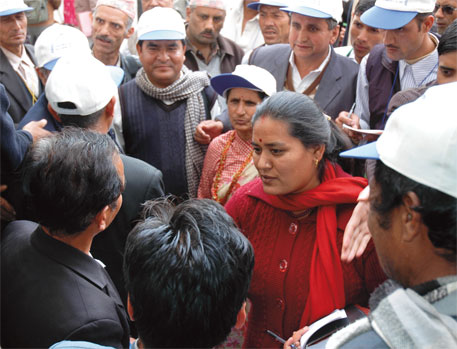 In the past 18 years, people have faced so many problems trying to protect the forests. There are instances of people being killed by rampaging elephants; of Maoist conflicts leading to extortions. Just a couple of months ago, forest encroachers chopped off hands of one Nanda Devi Kuwar of the Kailali CFUG as she confronted them. FECOFUN is supporting her medical treatment. The government does not realise that the forests cannot survive unless people protect them. Instead, it blames CFUGs for deforestation and poor governance.

Recently, we commissioned a study in the terai that found that some elites of the region are working in cahoots with forest officials to fell valuable timber, such as sandalwood. But these cases are being misreported as though CFUG members are responsible.

Why is community forestry weak in the terai region?

We have several times proposed different kinds of protection measures for the terai and high hills, but the government is unwilling to accept the proposals. Instead it creates roadblocks by introducing such measures as limited-use zone in the Churia hills that limits community forestry, or expands protected areas, national parks and wildlife corridors.

Community forestry is celebrated as a tool to fight poverty. Has it lost the focus in Nepal?

Leasehold forestry was especially introduced as a poverty alleviation tool. But this has not increased in scale. The poor were given degraded forests to manage. Poor forests for poor people is not fair.

Some say community forestry in Nepal has been politicised, and that it leans in favour of the Communist Party of Nepal (Unified Marxist–Leninist)

This is really not true. If you check the bio-data of FECOFUN executives, you will find that they represent various political ideologies—Maoist, Nepali Congress, Terai Madhesi Forum and UML.

What is FECOFUN’s position on REDD?

That’s a a difficult question. Last year FECOFUN launched a small pilot to promote REDD activities in three districts covering about 10,000 ha. The pilot is being supported by several international donors, including Norad (Norwegian development agency). But the challenge before us is how to evolve a system to distribute the money that comes into FECOFUN’s national treasury for forest conservation—what percentage goes to whom and on what basis.

The government too is preparing a REDD strategy for Nepal, which is yet to be finalised. But we are wary. It is difficult and complicated, given the detailed accounting and international climate politics. Many carbon cowboys (companies) have visited our office. I often ask them if we protect our forest in the name of climate change, how is it going to help our communities? We talked to people working in the forest sector in Brazil. Even they have some fears.

Tell me about your association with this movement

I started working for the forest user’s group of my community when I was 14. About 17 years ago at a workshop in Khabre, my home district, forest users’ groups from 44 districts across Nepal called for an amendment of the earlier Private Forest Law, and created a federation (FECOFUN) to represent the interests of communities. It set two objectives: to promote CFUGs across the country and to push the government to hand over forests to communities to manage.

I joined the federation. We went door-to-door and travelled from one district to another on foot to collect funds and sustain the campaign. In a period of nine years, I must have toured 75 districts on foot and interacted with some 5,000 CFUGs. Today, more than 16,000 of the 18,000 CFUGs in Nepal are FECOFUN members.