GM food can cause cancer 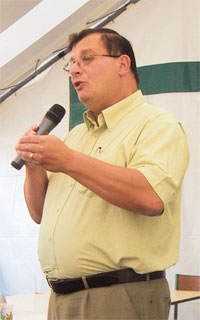 The data submitted to the Genetic Engineering Approval Committee (GEAC) of the Union environment ministry is not valid; it has not been signed by the scientist who conducted the tests. What is more scandalous is that the studies on the effects of Bt brinjal were conducted for just three months. If the product is to be consumed by humans, the tests should have been for a period of at least two years— the lifespan of a rodent. Worse, Mahyco tried to cover up the side-effects by jumbling data on various types of brinjal in a way that it was hard to compare Bt brinjal with normal brinjal. I am sorry to say people in the GEAC did not carefully assess the data. It is also not clear how the GEAC overlooked the fact that Bt brinjal has a protein that induces resistance to antibiotics. Mahyco has not studied hormonal impacts of Bt brinjal—Bt toxin found in it could lead to reproductive health problems.

On his findings on Roundup Ready
soybean that tolerates herbicides

Our study found that even minute doses of Roundup (a natural herbicide) disrupt sex hormones like androgen and estrogen. The inert ingredients in Roundup Ready (RR) soybean like polyethoxylated tallowamine kill human cells and disrupt the synthesis and action of human sex hormones. The research was published in this year’s July edition of the journal Toxicology. Some pregnant women who consumed RR soybean developed disorders. This combined with certain studies on animals in labs (conducted by others) made us conclude that Roundup is an endocrine disruptor.

On claims that GM plants reduce the
need for pesticides

This is a false projection. Bt plants, in fact, are designed to produce toxins to repel pests. Bt brinjal produces a very high quantity of 16-17mg toxin per kg. They affect animals. Unfortunately, tests to ascertain their effect on humans have not been conducted. RR soybean that makes up 63 per cent of GM plants in the world contains high amounts of Roundup. The US food and drug administration (USFDA) has allowed up to 400 ppm Roundup residues in animal feed. It is much more than what we recommended. There was a paper published in June in Scientific American saying USFDA would review the approval accorded to RR soybean because of our study.

On other tests that were needed

On the health impact of herbicidetolerant
crops like RR soybean

Toxins in GM plants can cause cancer, hormonal and reproductive problems and disorders of the nervous system. These chronic diseases are exploding all over the world and to our knowledge bacteria or viruses are not causing them. They may be due to chemicals contained in food. So, we definitely do not need food full of synthetic chemicals.

On the effect on bees and butterflies

GM food will affect pollinators. The genetic pollution that artificial foods will usher will multiply many times over with passing time. The whole ecosystem will get polluted as all GM plants either contain or produce toxins.

On GM feed reaching humans through
cattle and swine

Animals fed on GM food may have immunological defects and other problems that can affect humans who consume their meat. These animals should be labelled; Europe is preparing to label animals fed on GM crops. Labelling is important to trace the origin of animal products so that they can be recalled, if necessary.

On Monsanto, the biotech giant that
licensed Mahyco to develop Bt brinjal,
criticizing your study on its blog

The Monsanto blog said my choice of cells for the study was not biological but political. This argument is void. The blog said we used high concentration of Roundup residue. This is incorrect. We tested different Roundup formulations on fresh placenta, embryonic cells, umbilical cord cells and hepatic cell lines. Even when the formulations were diluted almost 100,000 times, the cells were destroyed. The actual concentration in GM food and feed is much hig - her than what we tested. Consuming it can even lead to defects in newborns.