For five years the non-profit Centre for Renewable Energy has been promoting and selling expensive solar lamps to poor families in Nepal. Today more than 100,000 households use these lamps. The ngo created the market without any subsidy. Its president Babu Raja Shrestha told Priyanka Chandola how. Edited excerpts 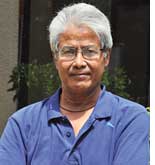 Nearly 60 per cent of our country's population uses kerosene wick lamp. They consume 86.7 million litres of kerosene every year at a cost of 4,162 million Nepali rupees (US $58.6 million). A solar lamp, tuki in Napalese, is charged by the sun. It consists of a solar photovoltaic panel, two sets of white led -based lamps (with four 100-mw bulbs) with rechargeable nickel metal hydride battery and a connector for powering a small radio. The lamp lasts more than five years. The rechargeable battery lasts two years.

The solar panel and other components of the lamp are imported and assembled locally. In December 2004, the Centre for Renewable Energy promoted a local entrepreneur to establish a small-scale solar tuki -manufacturing unit in Biratnagar town in Morang district. Seven such companies have been set up since.

How the lamp was made affordable

In 2005, grants from the United Nations Development Programme helped us micro-finance the lamps.

We launched the Light for All movement in January 2005 to create conditions that will make a self-sustaining market possible for such clean lighting systems. A self-sustaining market means manufacturers, distributors, retailers and financing institutions consider it economically feasible and there is an ongoing consumer demand.

Distribution involves community networks, and financing by micro-finance institutions, cooperatives, saving and credit groups, and ngos. The price structure has been designed to exclude the middleman. The manufacturer offers a 10 per cent discount to the distributor. This includes the cost for transportation and an advance for repair and maintenance.

I don't want subsidies for solar tukis. Manufacturers will be dependent on subsidies to maintain a minimum profit. The trend may eventually change from the demand-driven market to the supply-driven market. The value chain of the subsidized system nullifies the necessity of micro-finance. To maximize profit, subsidized suppliers may overlook credit provision and networking services.

Resources for subsidizing solar tuki s can be channelled to strengthen the existing market by investing in infrastructure and capacity building. The money can be used to diversify assembly line and to establish a revolving fund to assist emerging solar tuki entrepreneurs.

In 2006, the government of Nepal announced the Karnali Ujyalo Karyakram to distribute Surya Tuki, a modified version of solar tuki , in five districts of Karnali zone and four other districts. Under the scheme, Nepal plans to import 50,000 Surya Tukis and manufacture or assemble 10,000 lamps. Each lamp costs NRs 4,500.

Direct employment and value addition from this programme are modest, with one or two persons per district in the distribution line getting jobs. Service of products in both programmes is comparable. But the Karnali Ujyalo programme dismisses assembling that generates employment and provides business to wire and other equipment manufacturers. It also dismisses training and awareness programmes and network services. If the subsidy allocated for the programme is converted into a revolving fund for consumer financing and soft loan for entrepreneurs, at least nine tuki -making units could be set up in Karnali. Another venture, the Energy Sector Assistance Program, has a subsidy plan for 250,000 solar tukis. This could have provided a market opportunity for the new units.