I was dropped because I stood for Western Ghats conservation: P T Thomas

P T Thomas, senior Indian National Congress leader and sitting Member of Parliament from Idukki Lok Sabha constituency, has been denied a ticket for contesting the Lok Sabha elections. He had won the 2009 Lok Sabha election by more than 74,000 votes. The decision to drop him, a confidant of chief minister Oommen Chandy, was taken at a four-hour discussion between Kerala’s Congress leaders and the AICC screening committee in New Delhi. Except for Thomas and N Peethambara Kurup, MP from Kollam, all the 11 sitting Congress MPs from Kerala have been issued tickets again. Thomas spoke to Suchitra M over phone on why he was denied the ticket 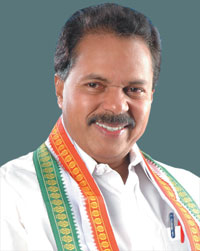 Q: You won the elections in 2009 with a good majority. Then why did your party drop you?

A: It could be because of my stand on the conservation of the Western Ghats. I don’t see any other reason.

Q: What was your stand?

A: I have been openly saying that the recommendations of the Madhav Gadgil committee should be implemented after taking people into confidence and protecting their land, livelihood and all other rights.

Q: Why should this upset your party?

A: My stand upset the Idukki dioceses of the Syro Malabar Catholic Church. The Idukki Bishop had openly opposed my candidature. The church has a good say in Idukki and it has been a supporter of our political front.

Q: Why should be the church be upset with your stand?

A: The church has been campaigning against the Kasturirangan and Gadgil committee reports. Agitations against the reports in Idukki are led by High Range Protection Council which is headed by Sebastian Kochupurakkal, a priest.

Q: What made you stick to your stand when other politicians, even those in your party, refrained from raising their voices for conservation of the Western Ghats?

A: The Western Ghats is a biodiversity hot spot. It enriches about half of the country’s geographical area. A number of rivers originate from this mountain range. Any destruction of the Western Ghats will lead to serious adverse ecological and environmental impact. However, just like other Western Ghats regions, in Idukki too, the mountain ranges are being destroyed due to encroachments in the forests, illegal constructions, quarrying, timber smuggling, sand mining from the rivers and ganja cultivation. In fact, the Gadgil committee report was a continuation of the decision of the Planning Commission in 1964 to protect the environment.

While Madhav Gadgil report was submitted, Jairam Ramesh, who was the environment minister then, had called a meeting of all the MPs from the Western Ghats region. I represented Idukki in that meeting and supported the report. My stand was that the recommendations of the Gadgil committee should be implemented after taking people into confidence. I never changed my stand even when the agitations were at a peak. I have been repeatedly saying that the protests against the Gadgil and Kasturirangan committee reports are unwarranted. There is nothing anti-people or anti-farmer in the reports. But there is a strong sentiment among people against implementing the recommendations of the reports.

A: Because people do not know what the reports say and the implications the recommendations have. They are totally misled by the Left Democratic Front and the church which have been actively campaigning against the conservation of the Western Ghats. First they make people take to streets by misleading them and then extend their support to them.

Q: What do they tell people?

A: They instill fear in people’s minds by telling them that villages declared ESA, or ecologically sensitive area, will be governed under the Forest Conservation Act; people will be eventually displaced from the region; and their land will be taken away by the government to develop forests. They do not tell people that ESA will come under the Environment Protection Act, 1986. People have been made to believe that they will lose their livelihood, and will not be allowed to build houses, shops, hospitals and roads. Can you believe they even spread absurd rumours like within ESA babies will have to be stopped crying after six in the evening to avoid disturbance to wild animals? They have been told that state highways passing through ESA will become elephant corridors.

Q: Why should the church mislead people?

A: The priests have read the reports in English as well as in Malayalam, the regional language. They are aware of the fact that there is nothing anti-farmer or anti-people in the reports. Yet, they spread rumours. They first scare people and then act as their saviours--a fear tactic to keep people always with them.

Q: What is the LDF’s motive in supporting the agitation?

A: It is trying to fish in troubled waters. The LDF is trying to penetrate into the vote bank which was hitherto not with the party. Also, the United Democratic Front government in the state has a majority of only two seats in the state assembly. Idukki district has two UDF MLAs. If they end up resigning over the Kasturirangan issue, the UDF government would fall.

Q: But detailed articles on the Gadgil and Kasturirangan reports have appeared in the media.

A: Most people here read newspapers like Malayala Manorama, Mangalam and Deepika which cater to the interests of the church and the settler farmers, not conservation of the Western Ghats.

Q: You were the MP from this constituency. Have you taken any effort to explain things to people?

A: Yes. But you should remember that I have been raising my voice for the protection of the Western Ghats while living among the people who strongly protest against implementing recommendations of the Gadgiland Kasturirangan reports.  Even my village, Upputhode, is one of the 123 villages identified as the Environmental Sensitive Area by the Kasturirangan Committee. But I never changed my stand. I had organized a big meeting to explain things to people. The State Biodiversity Board chairperson was the main speaker. At least 500 people, including people’s representatives to local bodies, had attended the meeting. But some priests and their associates started making noises to sabotage the proceedings. They did not want people to know the truth. I was organising the meeting in my capacity as a Member of Parliament and asked them to leave the hall if they did not want to listen to what we had to say. The meeting ended in a commotion. That is when the priests started isolating me.

Q: Now, by denying a seat to you, your party has also sent a wrong message to people.

A: Yes. I am deeply sad about it. The Indian National Congress and the CPI(M) are the main parties leading the two political fronts in the state. These two parties should have come out to explain the truth to people. I am very disturbed by the fact that both the parties succumb to all kinds of lobbies.

Q: The UDF government appointed a new panel to study the Kasturirangan report and finally succeeded in lobbying with MoEF to exclude a large area from the ESA in Kerala?

A: The chief minister knew there was nothing anti-people in the Western Ghats reports. But some Congress leaders in Idukki influenced him highlighting people’s agitation.

Q: Dean Kuriakose, who entered the fray in your place, does not seem to be saying anything on the conservation of the Western Ghats?

A: He is a candidate contesting the election and has to win the contest. Considering people’s mood at this stage it is difficult for him to argue for the conservation of the Western Ghats. But he knows the issues. I am sure he will take a proper stand after the elections.