Widely respected in the civil society, B D Sharma spent his life fighting for the rights of tribals for about four decades. Excerpts from a conversation with Richard Mahapatra 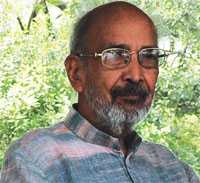 You are often asked what has changed in Bastar since you quit the job of a collector. What has not changed?

The tribals’ own design of development. They still lead a life based on their natural resources. In the Gondi language there is no future tense. This is because they have plenty of resources around: land, forests and water. This is where the conflict lies: people outside their world want to get those resources and impose new development models on them.

But as a fallout we are now trapped in a zero-sum game: if the government is wrong the Maoists must be right and vice versa. Where do tribals feature in this prolonged conflict? It is rather a minus-sum game. The tribals have suffered beyond their tolerance. They have been stripped of their natural capital. We deliberately don’t talk about their rights. As the SC/ST Commissioner, I once asked tribals why they supported Maoists. They said: “We are free from the tyranny of the land and police officials.” The message is clear: give tribals their rights and you don’t have Maoists. When I was the collector of Bastar, I refused permission to big projects. Trust me, that kept the Maoists away.

Do you suggest we need to control access to tribal areas?

Yes. I feel we all committed a mistake by not applying the Article 19 of the Constitution in tribal areas of central India. (It ensures fundamental right to move freely across India but limits access to certain areas.) We have imposed the restrictions in north-eastern states.

But the Constitution has provisions that acknowledge tribal rights

That is another problem of interpreting the Constitution. PESA is a radical piece of legislation. But even after 16 years of enactment no state has issued guidelines or implemented it in the right spirit. We have to change the perception. PESA is not Central legislation but a provision under the Fifth Schedule to the Constitution, which gives the tribals rights over their natural resources. Since we treat this as a law there is a tussle between states and the Centre. Anyway, nobody is interested in implementing PESA. Former chief minister of Madhya Pradesh, Digvijay Singh, once told me PESA was voted in Parliament because nobody read that. That speaks about the intention of our lawmakers.

Do you feel after the high-profile abductions and your negotiation, there will be a perceptible progress in meeting tribals’ development aspiration?

The conflict will not end with this because it did not start with this. The conflict is about ownership of land, forest and water resources in tribal areas. Till it is not settled in favour of the tribals, the conflict will continue. For record’s sake, I am not a Maoist, nor a government employee now. The state government has set up a high-powered committee to review the cases of all prisoners languishing in Chattisgarh jails, including the cases demanded by the Maoists. I think that is an achievement.

There is lack of confidence on panchayats, despite the fact that they have plenty of funds for development work. How do you approach the dilemma?

First, you don’t talk about confidence when you have done nothing to empower them. Second, tribals have their traditional governance system that the Constitution recognises. Why don’t you empower those institutions? Even during the British Raj, tribal areas were termed “excluded areas”, with their own institutions and power over local resoures. Independent India has become worse for them.