It makes perfect sense to integrate the green dimension 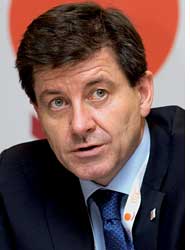 Guy Ryder, general secretary of the International Trade Union Confedaration, went to Poznan to attend his first UN climate meet. He sees green opportunity in the financial crisis. Pradip Saha caught up with him

Is it okay to discuss climate change in the midst of a financial crisis?

Governments are indicating that they are ready to inject large sums of money into their national economies--to some extent internationally as well. So we are seeing the abandonment of some of the rigorous orthodoxies. Interest rates are going down really low. There is deficit financing on a grand scale. If governments are going to spend that money, it makes perfect sense to integrate a green dimension into their spending. That is what we in the trade union movement advocate. We took a 'Green New Deal' to the G20 meet in November. It was disappointing to not get a response.

I think there is a real problem in the way the international community works. They tend to deal with problems in closed compartments, dealing with the global financial crisis in the G20, with climate change in Poznan and Copenhagen, and not making logical linkages. They really need to get the message that the way they deal with the financial crisis will have implications for climate change. I think Obama is talking quite explicitly about such links. We have to see what content he can give to the slogans he is emitting currently.

How do you view the bailout of the automobile industry, highly criticized by environmentalists, in the name of securing employment?

I think you are absolutely right to point to the automobile industry in the context of climate change. One thing is clear: the automobile industry cannot continue to be what it has always been. It's got to move itself to a lower carbon trajectory. That has to hapen, with or without a crisis. And, I think, we already have signs of that development. I haven't seen newspapers today, the signal's been given to General Motors, to Ford, or to Chrysler, there will be conditionalities around investment in new clean technologies.I think there is a much bigger question around the automobile industry. The fact of the matter is, on a world scale, more cars will be sold this year than ever before in the history: 59 million. If you put the emerging markets of India, China and Brazil into the picture, you see a very, very steep expansion path. I often quote the example of the Tata Nano to point to another dilemma we face in climate change negotiations. Some people consider the advent of the Nano as an ecological disaster. I don't know how many more hundreds of thousands of cars are going to be on the roads of India. I am sure I could make a comparison with China. This will send greenhouse gas emissions through the roof. But we also have to remember something.

The Tata Nano is to the middle class Indians [what the small car] was to Westerners in the 1950s. My parents were able to buy a Morris Minor, an American bought Ford T, a Volkswagen Beetle in Germany. These were moments of transformation and social liberation for families. It is part of the realization of the American dream or the European dream. Why can't Indians have that? For me, it epitomizes a major faultline in the negotiations here. Developing countries have got to say you rich people from the North want to deny us the same development path, dirty as it may be, which was socially extremely beneficial to your countries.

Beyond the market and technofixes, rich industrialized nations ultimately need to curb wasteful consumption. This may affect their level of productions and employment...

I understand. Nicholas Stern described climate change as the biggest market failure in history. The market can't be the entire solution. But we shouldn't be ideological about it. We shouldn't say that there is a market solution and a non-market one. I think we do have to harness a market solution. I wouldn't be scared of saying that the market has a role in pricing carbon. Clearly, new breakthrough technologies are required in the automobile industry and elsewhere. So don't discount the role of technology. But let us not imagine it as a quick-fix to the whole problem either. I think we have to revert to the age of the interventionist state. The state has really stepped back. What we see with climate change could apply to other areas of international policy as well. We need big government, we need some governance of the global economy. At the national level I think people want the state to step up its role once again. That's coming. I think that the state retreated too far.

Now your question about consumption is a key one. I don't think climate commitments necessarily mean stopping or reversing economic growth. They mean changing patterns of consumption: the types of things you produce, the types of things you consume. Let's be honest, lifestyle has to change. It is very difficult to put such considerations into immediate political agendas because we'll be entering an uncharted territory, and it is very difficult to gauge how people will react. What I can say is that a Norwegian or a Dane will react differently from an American citizen. You can probably say the same thing to me in India or other parts of the developing world. But if one is at the edge of poverty with zero or sub-zero options, there is nothing to change. The onus of lifestyle change has to be on the population with choices.

I think your point is right, the point of business waking up to change. You can judge that change from different perspectives. Some would say this is a cynical reaction. They know that regulation is coming, they know the carbon is going to be priced. So they are re-positioning themselves in the market.

They do dress up this conversion in rhetoric, presenting themselves as green--petroleum majors presenting themselves as champions of the environment. You have to question their real motivation. But whatever these are, we can like or disapprove them, the fact is they have discounted that they will be operating in a more regulated environmental situation. Carbon is going to be priced and their self interest lies in moving to low-carbon futures.

How would regulations be introduced? What would they be like?

The financial crisis is the most obvious catastrophe of ineffective and inadequate regulations. We are in this mess today because of the absolutely irresponsible de-regulation of financial markets, nationally and internationally. Governments are wrong when they accuse financial institutions for irresponsible behaviour. They have an obligation to regulate effectively. You can say the same about climate change, and about trade and investment. Regulations depend on the will of governments. In the financial arena, they have no option but to regulate. We have to wait till next year to see how effective and strong the regulations are. I think there is a political appetite, certainly among people, for regulations. Climate as a public good needs to be protected.

I think the free market, the neoliberal Washington Consensus of the last 30 years, has lived its last stage. But the question remains on what comes in its place. I don't think that we will go back to the 1960s. We are in a post-colonial, and largely post-industrial globalized world. What comes next, good or bad, won't be a replication of what was there in the 1960s. We should learn from the past, but I don't think we can reinvent it.