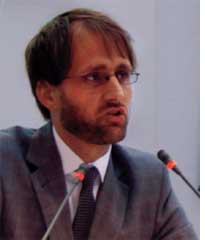 Philipp Rode, executive director of the Urban Age Programme at the UK's London School of Economics and Political Science, spoke to Mario D'Souza about the promise and problems of cities

On the promise of cities

In cities the lifestyle of the rich is not hidden from the poor. Exposure to consumption patterns of the very rich creates lifestyle desires among people belonging to poor income groups. There is a constant promise of glitz from the media: you are worth living only if you have a mobile phone, nice clothes, a new car--the list is endless. This triggers an increase in the crime rate as many act violently to fulfil their desires.

But cities, with their far more dynamic environments compared to rural areas, also facilitate climbing the social ladder. If you are poor and in a rural community it is very difficult to get out of the cycle of poverty.

We don't know what the ideal population size for a city should be. In the European context cities with a population between 100,000 and 500,000 people have delivered a high quality of life and high environmental standards. Below that it is getting into a dispersed population, characteristic of rural areas, and above that we are getting into congested agglomerations.

Nevertheless, large regional economies have highlighted the economic superiority of places that accumulate more than a million, in fact more than 10 million people, in one locality. So agglomerations have economic advantages. What we need to understand better is whether it is important to connect all people in a city or it's only a fraction that needs access to one another. If it's only a fraction that needs access, the so-called network cities could be an alternative growth model--rather than growing massively in one space you have a central hub not larger than 4 sq km connected with several hubs or cities. I don't know if this is applicable to India--it is a democracy and it is hard to control migration. I'll probably say with Pune being close to Mumbai, high-speed trains between the two cities will stimulate thinking towards the alternative I talk of.

Then there is the density question: Indian cities have a higher population density than most cities in the world. The attempts to decongest these cities should not result in urban sprawl. While some decongestion is probably needed, I think the basic characteristic of the high-density Indian cities, highly mixed use of space, is worth maintaining.

On cities and climate change

Take the case of motorization. The classic concerns have been the emission effects, congestion and accidents. On the emissions front, technology can achieve a lot. Particulate matter can be minimized through modern technology. We can't, however, filter CO2, so here the thinking needs to change: there aren't any technological answers here.

Adaptation to climate change is an urgent concern for Indian cities. A vast part of the population is exposed to the risks of climate change such as flooding, droughts, lack of water and freak weather. But there are complexities that prohibit innovation. An example is the freshwater provision where the poor pay much more for the water than the rich because they often don't have access to tap water. They pay by the container or the canister. There is a whole business involved, which throttles innovations.

Building standards have to be improved to make sure you don't have to rebuild after each flood or risk death when there are natural calamities. Related to that is the issue of technology transfer. A top-down strategy cannot implement adaptation measures. We must allow for local initiatives.

On the Bus Rapid Transit (BRT)

We have limited road space and have to get most out of the existing infrastructure. If we use a three-metre-wide traffic lane with mainly car-based vehicular traffic we may be able to move between 800 and 1,200 people an hour. On the same lane and same width, if we have a proper and very effective bus system it's 10 to 15 times that number.

Cyclists and pedestrians also have a lot to celebrate. That is the real value of brt: it has reallocated space.

The climate change debate can sometimes be very abstract. But instead of abstract conversations of emission, let us debate about space. About the social dimension of the city and how we can make it more sustainable through walking.Such questions will question the automobile industry as it is structured. I am not saying automobiles are really over. I think the product needs to be rethought. The car needs to be public. Ninety-five per cent of the time these cars just stand around.