`Many doctors are simply businessmen'

Samiran Nundy, chairperson of the department of surgical gastroenterology and organ transplantation at Sir Ganga Ram Hospital and editor-in-chief of the journal Current Medicine Research and Practice (CMRP), has stirred a hornet's nest by writing an editorial in the British Medical Journal and also in CMRP about rampant corruption in the Indian healthcare system. While speaking to Kundan Pandey, he presses on the need for immediate intervention to check corruption in the healthcare system. Excerpts: 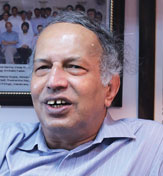 Why did you raise the issue?

Australian doctor David Berger, who worked in a small hospital in a Himalayan state, wrote that corruption is rife in Indian medical care and nobody seems to want to do anything about it. So I thought we should get together and do something. The first thing I did was to write an editorial for our journal.

Please elaborate on the nature of corruption in healthcare?

I have spent many years in All India Institute of Medical Sciences, Delhi, and I know the poor can not get admission there the normal way. You know how they get admission? They bribe some ward attendant who comes to a resident doctor or faculty member and says, "this is my brother, he has come from the village", and the bribe-giver gets admitted. In the public sector, there is huge political interference. It is also a form of corruption. Politicians keep dictating things like who will be promoted as professor.

What are the root causes of corruption?

It is imbalance of knowledge on the part of doctors as well as patients. The other problem is that patients respect whatever the doctor says and the latter take advantage of that. Governing bodies and medical councils are also not strong enough to prevent corruption.

Has privatisation played any role in fuelling graft?

Yes it has. Arnold Relbon, who was the editor of the New Indian Journal Medicine, said that in the US gradually more and more medicine is being done for profit and this has fuelled corruption. Similarly in India, many doctors are no longer academicians and professionals, they are simply businessmen.

Apart from awareness, what is needed to curb corruption?

Transparency is needed and it can be achieved by using electronic medical records, the type Barack Obama has promoted in the US. All interactions with doctors should be recorded electronically and privacy can be ensured by limiting access. I am part of a system called Raxa doctor, which is a free, open-source electronic medical records system where people can privately store and retrieve their personal medical data. Patients can share the data with doctors.