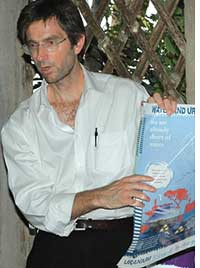 Tilman A Ruff, Australian head of the International Campaign to Abolish Nuclear Weapons (ICAN), was in India in November. At Jadugoda in East Singhbhum, Jharkhand, he observed a human settlement perilously close to the mines of Uranium Corporation of India. He spoke to Alok Gupta

Why do you oppose mining of radioactive minerals when they can generate nuclear power?

Nuclear power is not a long-term solution to electricity shortage. There is a limited stock of uranium and other radioactive metals on the planet. At the current rate of extraction, this stock will last barely a few decades. Radioactive minerals either go into the making of nuclear bombs or end up as waste. There is no scientific method to manage nuclear waste. This waste will harm the environment for billions of years. Solar and wind power are more viable options.

Yes it is. But in Australia people rejected the previous government that pushed for nuclear energy. They voted for a government that has made its anti-nuclear stance quite evident. But a lot needs to be done. Australian activists have emphasized time and again that uranium extraction is not worth the risk it poses to human life.

There is widespread belief that uranium mining is lucrative. Contrary to that, Australia's uranium export is just 0.28 per cent of its total mineral export. Australia earns just $400 million (US $258 million) from it out of a total export earning of over $100 billion (US $64.5 billion).

Why do you say nuclear arms race will trigger nuclear terrorism?

How do you see the nuclear Non Proliferation Treaty (npt) and nuclear disarmament?

NPT has turned into a non-performance treaty that has been rejected by many countries. Many nations have not complied with the treaty even after signing it. India, Israel and Pakistan are freely developing nuclear weapons. North Korea has nearly walked out of the treaty. Lately some actions of the International Atomic Energy Agency have created an imbalance. I am referring to the agency's approval of the Indo- US nuclear deal.

Hasn't India already agreed over no first use of nuclear bombs?

That is true but the 123 Agreement gives too much discount to India and it will have a far reaching impact. Other nations that have signed the 123 Agreement with the us have been barred from using their collaboration for nuclear tests. But amendments have been made to exempt India. Such exceptions made for a new signatory are bound to offend previous signatories.

What is the situation in Jadugoda?

The situation in Jadugoda is extremely dangerous. I have never seen human settlements so close to a Uranium mine, tailing or waste pond and tailing pipe. In the Dugridih village of Jadugoda a tailing pipe--carrying radioactive waste to the tailing pond of the corporation--burst on August 3 this year, and people have since been living amid the radioactive waste. Nowhere else in the world do people live amid such danger.

How grave is the threat of an impending nuclear catastrophe?

The gravity of the situation can be predicted from the Doomsday Clock, a symbolic clock maintained by the Bulletin of Atomic Scientists at the University of Chicago, which conveys how close the planet is to catastrophe. In 1991 the clock was 17 minutes to midnight, wherein midnight represents 'catastrophic destruction'. Now it has moved five minutes to midnight. The bulletin has specifically mentioned that a nuclear catastrophe is imminent.