Amulya Ratna Nanda, registrar-general and census commissioner of India, feels the country has made some progress in bringing down its growth rate 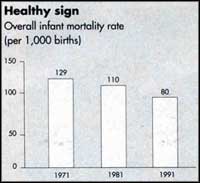 THE MAN who presided over one of the world's largest head-counting exercises -- the 1991 Indian census -- is soft-spoken Amulya Ratna Nanda, registrar-general and census commissioner.

The 1991 census, the fifth in independent India, broke new ground in many ways. When the figures finally come in over the next year or so, many missing pieces would be in place concerning the country's profile. For instance, information on the type of cooking fuel people use was solicited for the first time, presumably to study the impact this has on the environment. Attempts were also made this time to document reasons why people migrate -- whether it is for better prospects or because of natural calamities. And, for the first time, unpaid work, both in the field and in the home, was recognised for census purposes.

However, Nanda is cautious and maintains that census data cannot be a substitute for in-depth, scientifically conducted sampling surveys in the documenting of complex social phenomena.

The 1991 census put our population growth rate at 2.1 per cent per annum. Is this decimal drop from the figure that prevailed in the 1980s significant, or is it just "demographic inertia", as some population experts have put it?
It depends on how one looks at it. If one considers the fact that we are 860 million, then even a change of a decimal point, insignificant though it may appear, makes a lot of difference. After all, reductions and increases in population growth rate don't take place overnight. It takes time, almost a generation, for any population strategy to have its effect. And the decline certainly cannot be characterised as demographic inertia. It suggests that a certain trend has set in, which has been confirmed not only by the census data, but by other data like the annual estimates of crude birth rates we get on the basis of our annual survey known as the Sample Registration Scheme (SRS).

But China, obviously, has done much better, having brought down its growth rate from 2.3 to its present figure of 1.3 per cent between 1965 and 1980.
In China, they worked under a different system. Theirs was a very conscious, well-planned population control policy, coupled with various social measures to promote equity. An element of coercion was also resorted to. In our country, with its emphasis on individual freedom and a democratic outlook, this has not been the case. However, interestingly, with liberalisation in China, there has been a slight reversal of the declining growth rate -- in fact, the country is now seeing its third baby boom.

What do you consider to be the most significant findings thrown up so far by the 1991 census?
The growth rate came as no surprise. It came very close to projections -- whether they were those done by the World Bank, or those done by us. In terms of urbanisation, there was some surprise if you go by the projections done by the Planning Commission or those of the National Commission on Urbanisation, 1988. The urbanisation level was expected to be 28 or 29 per cent, while it was found to be 26 per cent. This means that there's a slowing down in our urban growth rate. From 46 per cent in 1971-81, it has come down to 36 per cent in 1981-91.

Another striking finding was that women have stolen a march over men in terms of participation in the workforce. Between 1981 and 1991, the number of male workers increased by 21.40 per cent -- 17.64 per cent in rural areas and 34.76 per cent in urban areas. Women, in contrast, notched an increase of 42.26 per cent -- with a 40.25 per cent increase in rural areas and 60.99 per cent in urban areas. Of course, the figures vary from state to state. In Sikkim, for example, women accounted for 52.74 per cent of the work force, but in Punjab, for only 6.78 per cent. But the overall picture seems to suggest that there may be some amount of marginalisation of women cultivators and that men are migrating in search of work, leaving their responsibilities in the fields to the women.

Can you explain some of the reasons why our urban growth levels are declining?
One should clarify this a bit. We found that the two big metropolises of Delhi and Bombay have been growing at a very rapid rate. This is partly due to the extension of the city boundaries. For instance, Bombay, which includes New Bombay this time, has a population of 12.7 million, outstripping Calcutta, with a population of around 10.9 million. The census also showed that Calcutta and Madras have not grown that much and the latter's population stays at 5.3 million.

Again, when you come to medium-sized towns or small towns, you find they have not grown as fast as cities. About 65 per cent of India's entire urban population of around 218 million live in 300 Class 1 cities (with a population of one lakh and more), half this number live in 23 one-million-plus metropolises and almost half that number live in the four mega cities of Bombay, Calcutta, Delhi and Madras.

So there appears to be some kind of gravitational pull towards the biggest cities. Is this from rural to urban areas?
It could also be urban-urban migration. There seems to be a marked slowing down of rural-urban migration, from the rate which prevailed in the 1970s. This could be because of rural growth centres -- for instance, rural employment schemes may have had a marginal but positive impact.

Together with this, a lack of facilities in the towns, like the high cost of land and houses, may have dissuaded migration. People may prefer to stay in the periphery of such urban agglomerations and commute to work in urban areas. Factors like these could possibly account for the general decline in urban growth rates. This is just a hypothesis and needs to be substantiated by further figures, which should be coming in soon.

But wouldn't it still appear that urbanisation is a problem for our planners?
Of course, today's urban population may be less than the figure projected, but that doesn't mean we can afford to ignore the problem. About 30 to 31 per cent, or one-third, of our population, is likely to be urbanised by AD 2001 and we would have to view the problem both in terms of urban development, as well as in terms of rural development. The deficiencies in our urban areas are well-known -- the lack of housing stock, various infrastructural inadequacies and so on. The Commission on Urbanisation has gone into this issue and come up with a report.

We may get further insights if there is an urban housing census in the mid-1990s. In that census, we would go into further detail into housing structures, housing stock, the cost of housing and so on. Together with this, the National Sample Survey Organisation, starting next year, is going in some depth into the issues of urban slums and urban commuting. All this will be very useful for future policy making.

Which states would you rate as having performed most satisfactorily in bringing down their growth rates?
Based on the census as well as the SRS data, Kerala and Tamil Nadu have been showing a consistent downward trend in fertility levels. Kerala appears to have stabilised, both in terms of crude birth rate and in net reproduction rate (NRR, the replacement rate of females) -- it has gone in for NRR 1. Its infant mortality, at 17 per 1,000 live births, is comparable with figures of developed countries. I would not, however, say the same about Tamil Nadu, although it is approaching NRR 1 as well, for the simple reason that this trend has not achieved complete equilibrium.

If you were to map India in term of "bright" and "dark" areas, what would your map look like?
The pattern is well-known. States like Kerala, Tamil Nadu, to some extent, Karnataka and parts of Maharashtra and Gujarat all show a distinct pattern in terms of reduction of fertility, mortality and other positive indicators. Whereas states like UP, Bihar, Rajasthan and Madhya Pradesh present a total contrast to this.

The Northeast shows a different picture entirely. For example, in Nagaland, Mizoram or even Manipur, literacy rates are high and infant mortality rates low. Yet, a state like Nagaland has registered the highest population growth rate in the country -- somewhere between 50 per cent to 60 per cent in each of the two decades of 1971-81 and 1981-91.