‘We rule out films by corporates’

Lucia Rikaki’s inspirations range from ancient civilisations to films to communities fostered by the Internet. An acclaimed documentary maker of Greece, she is the curator of the annual Kos International Health Film Festival. She speaks to Pradip Saha on her experiences in conducting the festival which is now two editions old 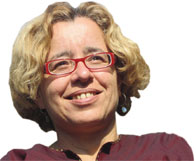 Why a health film festival?

I thought it would be a good idea to have the festival in Greece because Hippocrates, the father of medicine, was born there. Coincidentally, I found support from the mayor of the island where Hippocrates was born. The directors who have participated in the first two editions of the festival agree that a film festival that showcases medical work from all perspectives is a good idea. We do know about films that focus on good medical practices, on human well-being, on preventing illness and on social issues. But we do not know much about films that deal with scientific aspects of medicines, surgery for example. We have tried to fulfil that need. We showed 90 films in the first edition and 120 in the second.

How do you define health?

Being healthy allows one to live in a free manner. A person who is not healthy is dependent not only on other people but also medicines.

What are the trends in films on health issues?

We rule out films made by corporates. There are research films that point out how pharmaceuticals deal with health issues; these are mostly activist films that draw on good research but are low on cinematic quality. The ones that interest me most are those that deal with human stories, about people struck by one illness or the other. Stories about how they care for each other, or don’t. Such films are sometimes eye-openers for people from the medical profession.

A lot of films draw from the film-makers’ families. When illness hits their lives, they have tools to capture it cinematically. Of course there are ethical issues—there are limits to the spaces where a camera can intrude. Health is, after all, also a private issue.

I try to show films that focus on philosophical issues. In the first edition there was Existence, an excellent film that focused on the meaning of life. We had a film on the mayor of Barcelona who was diagnosed with Alzheimer’s disease. He quit politics to fight his ailment.

What kinds of films come from different parts of the world?

Films that narrate personal stories mostly come from the West, because there are taboos in being candid about illness in many parts of the world. But there are good exceptions. We once showed an Israeli film about a fashion model who abandoned a modelling career in New York after her brother went into coma. She cared for him and filmed her experiences. It’s a powerful film.

There is: in style and research methods. Culture influences play a big part. Some films from India, for example, have excessive use of music and dramatic narratives that come from a TV culture. But I guess they are effective in addressing culture-specific issues.

Give some of the curatorial problems you face.

As a curator, you do not treat all films the same way. Some have to be given prime time. In the last edition there was a film about a scientist accused of homosexuality. Some of his work was taken away from him. It was an excellent film but I was scared of giving it prime time. The film was well received and also awarded. The jury said I had killed the film by showing it in the morning. The award made me correct my mistake and I could show it again. I have made other mistakes which I could not correct.

While doing the film festival you do have a social and political objective. Do you see mindsets changing?

Change always happens on a small scale. I do see good medical practices. We need to highlight good practices and put trust in the humanist side. People feel better because they can trust the medical system.