Hornbills, the awkward-looking birds with over-sized beaks, are important for the regeneration of Himalayan forests in north-east India. They are intricately connected to the myths and cultures of tribes in the region. However, over-hunting and habitat destruction has made it difficult for the birds to breed and survive in their natural abode. For the past decade, Aparajita Datta, scientist at the Nature Conservation Foundation (NCF) and a team of researchers from the foundation, have been working with the forest department and communities to protect the birds through innovative programmes. She was recently awarded the Whitley Award, also known as Green Oscar, by the Whitley Fund for Nature to expand her project. She responded to Kumar Sambhav Shrivastava's questions on ongoing efforts to protect the birds, the tribal people who have turned from hunters to guardians, and her own concerns regarding conservation and the hornbills. Excerpts from the e-mail interview: 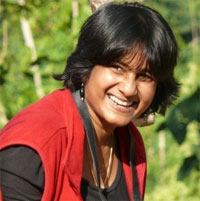 On the hornbill conservation project currently on in Arunachal Pradesh

The long-term monitoring of hornbill nest trees that we were conducting in Pakke Tiger Reserve (TR) in Arunachal Pradesh since 2003 revealed that the hornbills had been going through tremendous stress outside the reserve during breeding season. Between 1995 and 2005, there was a huge loss of forest cover in the adjoining state of Assam in Sonitpur district, which is contiguous with Pakke TR. The few nest trees that we knew outside Pakke TR were being abandoned by hornbills due to human disturbance and many were cut down after some years. Over time, we also started observing competitive interactions for nests between hornbill species, including nest takeovers.

Therefore, in 2011 we started a partnership with the local village council called the Ghora-Aabhe (or council of village elders) and the Arunachal Pradesh Forest Department to protect hornbill habitat and nest trees in the forests adjoining Pakke. The Ghora-Aabhe includes Nyishi village headmen from about 14 surrounding villages near the south-eastern boundary of the reserve. They actively assist the forest department in protection, have banned hunting, regulate fishing and NTFP (non-timber forest produce) extraction and are engaged in creating awareness among their own community to reduce and eventually stop hunting.

We also got urban citizens involved in hornbill conservation by introducing the concept of shared parenting. People can adopt nests of four hornbill species by paying an amount of Rs 5,000 per nest; many individuals contributed more. The donors then act as foster parents of hornbills, while local people look after the nests to ensure they are not disturbed and the nest trees are not cut down. The idea is borrowed from a long-running successful nest adoption programme in Thailand started by Pilai Poonswad. The donated money is used to provide income to villagers who have been selected by the community as nest protectors. There are now 12 nest protectors and a local coordinator from nine villages. Amruta Rane, research affiliate at NCF, co-ordinates the field programme. Some of the money raised each year is also given to the village council to use for village welfare and development.

How will the Whitley Award help you scale up the project?

Our past work has mainly focused on two protected area sites in Arunachal—Pakke TR and Namdapha TR. With the Whitley Award, we now plan to survey multiple sites across several other states of north-east India. This will further our understanding of the status of hornbill populations all over north-east India. It will help identify sites with good hornbill populations, prioritise sites for conservation action and identify potential mechanisms or models by which local community institutions and forest departments can address threats to hornbills at specific sites. 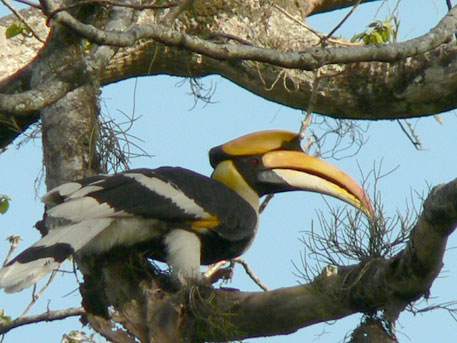 Is there any specific reason for your choosing the hornbill as your subject of study?

As a scientist, I am particularly fascinated by their unique breeding biology, their role as seed dispersers and several other questions that remain unanswered about their seasonal movement patterns and roosting behaviour.

But at an emotional level, they also look incredibly funny and awkward with their oversized beaks and somehow vulnerable. I remember once watching a Great Hornbill male perched on a lone tree in a totally degraded forest landscape outside Pakke (in adjoining Assam) looking lost and bewildered at what was once his home. There had been a nest tree there in which we had observed a Great Hornbill pair use successfully for three years, till one year, that tree was also gone. I felt very helpless and sad then and felt that my research had been of no use to save even that one Great Hornbill nest tree; I think now we have that opportunity to try and change this situation at least in some areas for the long-term future of hornbills and their forests.

Why do you consider hornbills as icons for conservation of the Himalayan forests of Arunachal Pradesh?

They are important seed dispersers, moving over large areas and spreading seeds, and by conserving their populations we ensure regeneration of forests. In Pakke TR, for example, we found them dispersing seeds of more than 25 per cent of the known tree species there. Research has shown that the decline of hornbills will result in reduced seed dispersal and altered regeneration patterns of tree species.

Local people have a utilitarian value for hornbill feathers, casque or beak, fat and meat. But it is also a bird which people find easy to relate to or have empathy with. People connect to the unique characteristics of the bird such as their lifelong pair bond and unique breeding system, where the male feeds the female and chick throughout a long breeding season, and the female keeps herself and her chicks sealed up inside a tree cavity. Tribals consider it a sin to kill the birds during the breeding season and a taboo exists on hunting them in their nests. There is a lot of tribal folklore associated with hornbills and their lives.

The change in the attitudes of the Nyishi people, especially many hunters, living around the southern boundary of Pakke TR has happened over a long period. In the past decade, the park management has promoted local institutions like the Ghora-Aabhe and the Village Forest Development Council. Efforts were initiated by the former divisional forest officer (DFO) Chukku Loma, a Nyishi officer, along with Wildlife Trust of India to encourage people to use fiberglass replicas of Great Hornbill beaks on their headgear rather than wear the real ones. Bans on hunting hornbills were also instituted around 2003. Another proactive officer of the Arunachal Pradesh Forest Department, Tana Tapi, has not only strengthened the protection inside the reserve but has also held repeated dialogues with villagers and encouraged the village headmen to regulate and stop hunting, The forest department employs around 140 Nyishi youth from around these villages in park protection. They form the backbone of the protection efforts.

Hunting is still prevalent among the Nyishi villagers living along the northern boundaries of the park. Hunting has been a traditional practice and is carried out for a variety of reasons. The tribals see wildlife as a source of medicine, meat and for other cultural uses as well as for income. I know that people from outside the Northeast get shocked and upset to see the levels of hunting (so do I!), but I think its important for us to not be judgemental and make an effort to understand the context and cultures, histories of people and places better. There should be attempts made by government conservation organisations, and conservationists to reduce/stop hunting, but it has to be done with a greater understanding in innovative ways.

What is your view of the current state of wildlife and its conservation in India? Do you think conservation science, the way it is practised, and conservation policies need some kind of course correction?

I think there is reason for hope, but also cause for worry and gloom. There are large threats due to the increasing clearances being sought and given for large mining, dam and other developments or commercial projects. There is also improving transparency and increasing public attention on these issues and avenues for review. We have a lot of hope for many species whose status have remained stable or improved due to conservation efforts, but there are species like the Great Indian Bustard, where only 200 birds are left despite it being such an important bird of the grasslands.

As far as conservation science is concerned, there are so many gaps. We still do not have a reliable countrywide mapping of forest cover at meaningful scales; there is limited understanding of the impact of climate change on our ecosystems, plants, and animals and other processes, and we do little research on understanding the effects of dams on our river ecosystems. Even basic inventorying and documentation of biodiversity in many of our wild areas is still missing. We need long-term monitoring and research and more collaboration and sharing of data between scientists, government and institutions. Limited funding, especially for basic and academic research, hampers long-term and experimental research, as does the perennial problem of gaining permission to access wild areas for research. Many scientists face delays and denial of permissions for research in protected areas. Asking big questions for a better scientific understanding of species and ecosystems requires long-term research and support.

I believe that whether or not it is a protected area, conservation only by diktat and enforcement can often have limited long-lasting value. Local support is essential for long-term conservation success and it is imperative that costs (perceived or actual) borne by local communities need to be addressed and offset by conservation practitioners. An engagement with local people, an informed understanding of their socio-economic needs and attitudes to wildlife conservation are necessary to be able to reconcile people and wildlife.

It defeats the whole purpose of the conservation movement if people who should be the most important allies for conservation are alienated by what they perceive as unjust curtailment of resource use or take-over of their land without proper consultation, as I know from personal experience.

Did you always want to be a wildlife scientist, or did it just happen by chance?

No, it was not really by chance. I was always interested in animals from childhood and my earliest memories were of wanting to be a vet, which changed to wanting to be a park ranger after living in Zambia for some years as a child. Biology was always my favourite subject in school and I had especially got interested in studying ecology. It was by chance that I saw a brochure for the course at Wildlife Institute of India (WII) in a bookshop in Kolkata and I applied. So although getting into the master’s course at WII was in some ways by chance; it had always been my dream to study to do this.