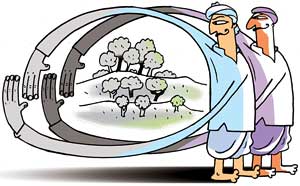 villagers of Betul district in Madhya Pradesh have taken the first step to reclaim community-owned forestland taken away by the government after independence.

On October 2, the 1,300 revenue villages in the district held separate meetings and passed resolutions saying their rights dating back to pre-independence era should be recorded in the village registers maintained under the forest rights act (fra) of 2006. The resolutions were sent to the tehsil- level forest committees that will forward them to the senior district officials for action.

This is the first time in the country that such a demand has been raised for registering community rights, said Anil Garg, researcher and forest rights activist in Betul.

Villagers said it is crucial to register their rights (see box) in detail so that they can claim them under the fra that recognizes such community rights, including those given away by rulers of erstwhile princely states. Unless the rights are specified, we wont be able to exercise them, said Narendra Misra of Kesia village. He said these rights are still valid but tracts of common land in most villages have been taken over by the forest department that treats villagers as criminals if they collect firewood or other produce from the forests.

These resolutions follow a June 10 order of the secretary for the states tribal department saying rights contained in old records wajibul arja and nistaar patrak should be compiled and made available to all village panchayats.

Garg said the forest departments takeover of village lands was illegal. After 1956, most of the community land mentioned in wajibul arja was declared protected forest but the department did not follow proper notification procedures mentioned in the Indian Forest Act, said Garg. Registering the village rights would mean these parcels of land would have to be excluded from the domain of the forest department, Garg said. The forest department had admitted these lapses in the state assembly but did nothing to restore community rights of people, he added. Chief executive officer of Betul district panchayat, B S Jamod, admitted that forest officials hindered people from using their common land but added there were no complaints in this regard. He said he was yet to receive the gram sabha resolutions.

Mohan Hirabai Hiralal of the non-profit, Vrikshamitra, explained how registering the community rights would help villagers. Hiralal was instrumental in getting tribal people of Mendha Lekha and Gadchiroli districts of Maharashtra file their claims for community forest rights (see Two tribal villages get 2,349 hectares, Down To Earth, September 15, 2009). He said tribal people of the two villages had furnished land records from nistaar documents to claim rights over village forests.