14 km from Pune, its footprint 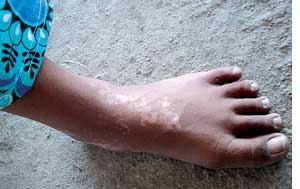 Hanumant Bhandari is getting used to his speckled face. The 10-year-old student of a school on the outskirts of Pune was intrigued by the white spots on his face and thighs when they first appeared a year ago. The spots disappear whenever he takes medicine, but reappear in no time. Over half of the 350 children in the residential school have white patches over their bodies. It is not a hereditary disease, but a mark of Pune's garbage dumped on a hillock close to the Kailash Wasi Namdev Mahadev Harpale School.

Over 800 tonnes of waste is dumped there every day. "This has been going on for 18 years," said Somnath Bhimrao Shinde, principal of the school meant for the Scheduled Caste and Scheduled Tribe children. "Toxins in the garbage leach into the groundwater. Students drink water from a well. We have no option." Only a few houses in the area receive municipal water supply. Students also suffer from water-borne diseases like dysentery, jaundice and typhoid.

Kailash Wasi is in Phurshungi village, about 14 km from Pune city. Most students are either orphans or poor. Their parents work in faraway Mumbai, Nashik and Kolhapur. Some come from as far as Nepal.

The waste catches fire every other day, releasing noxious methane. Since the dump site is on top of a hillock the wind disperses the smoke in all directions. "This is ruining the respiratory system of children," said Shinde.

The filth and smoke also mean additional cost to the charitable school. "On an average the school is spending Rs 2,000 per month per student towards medical bills. We are always short of money but we cannot see our children suffer," said the principal.


Pune city generates about 1,300 tonnes of solid waste every day, according to M S Devnikar, additional commissioner, Pune Municipal Corporation. Of this, over 800 tonnes is dumped at the landfill occupying 49 hectares (ha) in Phurshungi and 17 ha in Uruli Dewachi village. About 70,000 people live in the two villages. The effects of open, unscientific dumping began to show only in the past few years. There is no family in the villages without a sick person.

"Our village is always enveloped in smoke coming out of the waste. Some days it is so thick that one cannot see beyond three metres," said Raghunath Nagargoge of Phurshungi. "The smoke often wafts into the classrooms and students break into a bout of coughing. They complain of a burning sensation in the eyes and frequently go out to wash their eyes. This disrupts classes," said Sudhir Patil, 31, English teacher at the school. The walls and floors of classrooms are always covered with flies. Despite these odds, Shinde proudly claimed, 96 per cent of the Class X students cleared the exams last year.

Children are not the only victims. Twenty-two-year-old Dhananjay Bhivji Kate, who works as an administrative assistant at the school, said he always has fever, cough or headache. "When I was in Sangli, 200 km away, I never fell sick. But here the stench and the smoke refuse to leave you. My family wants me to come back," he added.

People complain they can't even have food in peace. "Flies are all over the village. While eating we have to use one hand to ward them off. Sometimes we swallow flies," said Abhimanyu Darbey, 20, who lives with his mother and younger brother in Phurshungi.

At Mantarwadi basti, next to the waste site, Jayshree Mahapure complained her six-month-old grandson is always suffering from either dysentery, vomiting or fever. Everyone in her family has a breathing problem or throat infection.

"Our relatives have stopped visiting us due to the stench and smoke," she lamented.

Vinod Bire, Mahapure's neighbour, lives near the temple at Mantarwadi. He was recently diagnosed with dengue and his wife has typhoid. They have three sons and their 12-year-old daughter has white spots on face and legs. Bire fears he may not be able to find her a groom when she reaches marriageable age.

Bire's fear is not unfounded. Phurshungi and Uruli Dewachi carry a stigma; people refuse to marry their daughters in these villages. Over 25 marriage proposals have fallen through in the past two years, according to media reports. Admitted Sanjay Sadashiv Harpale, deputy sarpanch of Phurshungi "The air and water are so contaminated that no one wants to send his daughter to this hell. Villagers do not talk about it openly because this brings bad name to the family, but breaking of matrimonial alliances is a reality in Phurshungi."


Villagers say during the four months of monsoon their village turns into a pool of toxic water; it enters their houses. The water from the garbage dump also flows into the Kaala Odha rivulet, and from there into the Mula and Mutha rivers of Pune. "Earlier, the nullah flowing from the hilltop used to bring clean water, which we used for irrigation. Now the contaminated water has destroyed our fields and seeped into our groundwater. Well water is sometimes black and sometimes red," said Dilip Mehta, a farmer in Phurshungi.

Vitthal Bhiku Badhale, a 52-year-old farmer at Mantarwadi, laments the money he invested in water pumps and electricity connection has gone waste. He and other villagers used to grow millet, wheat, sorghum and vegetables. "Our land is barren. We now survive on menial work," said Badhale.

Over 1,000 villagers work as porters at a railway godown and a goods shed, barely half a kilometre from the dump yard. Balaji Salunkhe, an 18-year-old from Phurshungi, loads and unloads goods there. "Drinking water in this area stinks. Some areas do get the municipal supply, but most pipes leak and the pressure is low, so we are forced to drink dirty water," said Salunkhe.

Doctors confirm unscientific dumping at Phurshungi and Uruli Dewachi has led to an epidemic. Ten-year-old Saurabh Jagannath Badhale of Phurshungi has an ear infection for the past one year. When his parents took him to a doctor, he blamed it on polluted air.

Balasaheb Harpale runs a 20-bed polyclinic at Bherkrai Nagar, half a kilometre from Kailash Wasi school. "Most of my patients are from Phurshungi and Uruli Dewachi. They complain of respiratory tract infections, cough and itching. Jaundice, dengue and malaria are also common. Some cases are of hair fall and ear infection," said Harpale. The villagers have to be admitted even when there is a slight infection because their immune system is weak due to constant exposure to smoke. Many patients may develop lung cancer, warned Harpale.


Residents of Phurshungi and Uruli Dewachi realize they can't take it anymore; they want justice. In early May villagers launched an agitation and blocked roads for a week. They did not let corporation trucks pass through their villages to dump waste. This led to Pune city literally getting buried in waste--over 7,000 tonnes of waste in Pune remained uncollected for a week.

This was enough to shake the city and district administration into action. Meetings were called. And this time villagers ensured they took place at the dump site--after all, corporation officials should get a taste of their own medicine. After much deliberation, on May 15, the villagers and the corporation reached an agreement. "We have given seven months to the corporation to stop dumping at our villages and cap the landfill," Sanjay Sadashiv Harpale told Down To Earth. In these months, the corporation has to look for an alternative dump site and upgrade its waste-processing plants.

Said Devnikar "Soon we will scientifically cap the landfill at Phurshungi and Uruli Dewachi." The corporation plans to increase the combined capacity of its two waste-processing plants by 800 tonnes per day. The current capacity of the plants set up by Hanjer Biotech Energies and Selco International is 350 tonnes per day. "This will ensure no waste goes to the landfill at the villages," said Devnikar.

While the Selco plant is being set up, the corporation has given another company land at the landfill, where it sorts out waste in the open and makes fertilizer from it. "We have also requested the collector to allot us alternative sites for more waste-processing units," said Devnikar. The villagers are watching.