The government takes the usual market-regulatory steps every time there is a surge in prices of pulses — the primary source of protein for a majority of Indians. But shortfall in domestic production, the main reason behind the price rise, remains unaddressed.

IN APRIL this year, there was a big surge in prices of pulses. The top two pulses in terms of consumption, chana (gram) and tur (pigeon pea), crossed the Rs 100 per kg mark, with tur witnessing a 30 per cent rise and selling at Rs 130 a kg. The government acted by removing the quantitative restriction on the import of pulses on May 15 to improve their availability.

Subsequently, it imposed stock limits for wholesalers, importers, millers and retailers on July 2 to prevent hoarding. 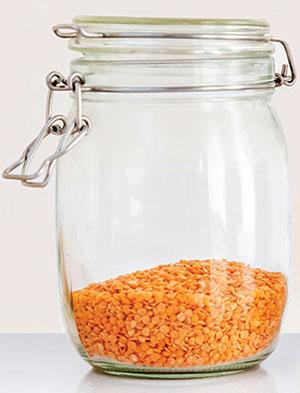 This is how the government behaves every time the price of an essential commodity goes up. It is also the reason India is the largest importer of pulses, despite being the largest producer and consumer for the same.

Though the imports have declined in the past decade, India still does not produce enough to meet domestic demand, causing shortages and occasional surge in prices.

One such surge in 2015 resulted in India signing an MoU with Mozambique in 2016 for five years, its first such agreement with a foreign country, to purchase “pigeon peas and other pulses” through “private channels or through Government to Government sales” every year.

The 2015 price surge jolted the government and triggered a political reaction, leading to a gamut of incentives to regulate the market.

In a written reply to the Rajya Sabha in July that year, the then Union Minister for Consumer Affairs, Food and Public Distribution Ram Vilas Paswan said the retail price of major pulses has risen from 12.63 per cent to 40.73 per cent over one year due to the decline in production caused by adverse weather conditions.

A high-level inter-ministerial meeting on October 14, 2015, chaired by the then Union Minister for Finance Arun Jaitley, decided to create a buffer stock by procurement and import of pulses.

Just a year before, in 2014, the government had set up the Price Stabilisation Fund (PSF) under the Department of Agriculture, Cooperation and Farmers’ Welfare to regulate volatility in the prices of essential agricultural commodities. In 2015, it used PSF to import 5,000 tonnes of tur through Metals and Minerals Trading Corporation, a government company. The pulse was released to the states at lower rates. 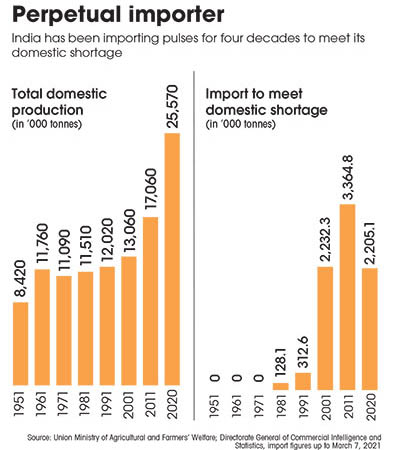 The government also tried to prevent hoarding by imposing limits on pulses sourced from imports, stock held by exporters, stocks to be used as raw material by licensed food processors and stocks in large departmental retailers.

However, 2016-17 saw production of pulses increase to 23.13 million tonnes — a record at the time — making the government impose quantitative restrictions on their import that stayed till May 15 this year, when they were removed to tackle the current surge in prices.

There were two other crucial policy developments last year. On June 5, 2020, the government notified the Essential Commodities (Amendment) Ordinance, 2020.

It added a new sub-section (1A) in Section 3 of the Essential Commodities Act, 1955, to stipulate control orders with respect to supply of certain foods.

It says such orders may be issued only under “extraordinary circumstances” that “may” include war, famine, extraordinary price rise and natural calamity of grave nature.

It also says an order for regulating stock limit of any agricultural produce may be issued only if there is a 50 per cent increase in the retail price of non-perishable agricultural food items over the price prevailing immediately preceding a year or the average retail price in the past five years — whichever is lower. 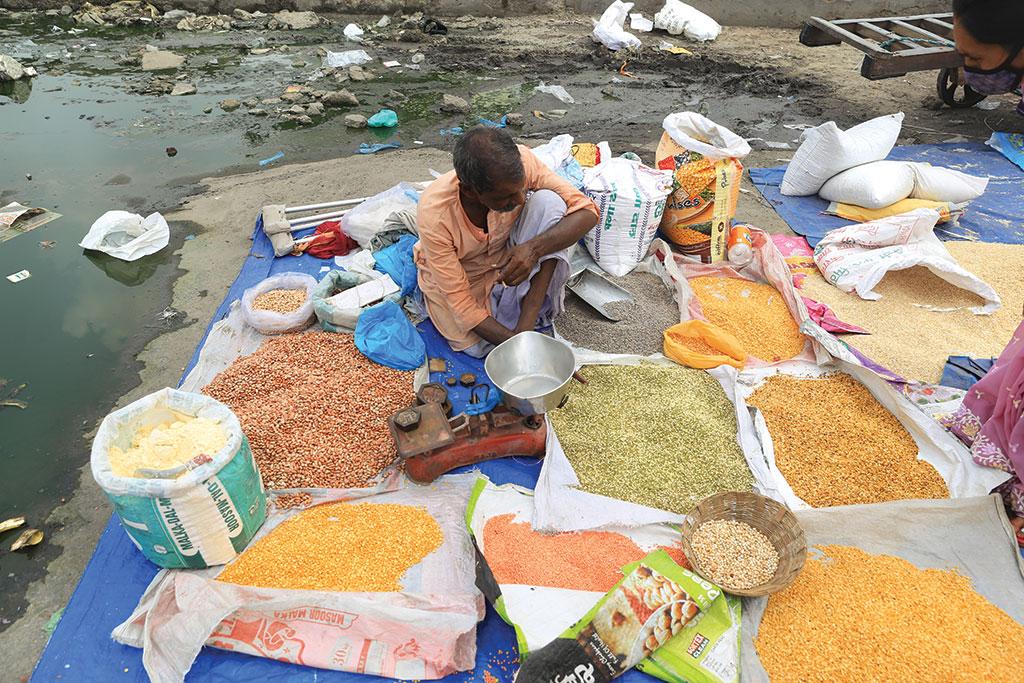 The Ordinance, however, makes the stock limit orders inapplicable to a processor or value chain participant of any agricultural produce if their stock does not exceed the overall ceiling of installed capacity for processing; or, in case of an exporter, it does not exceed overall demand for export.

This, say experts, will aid corporates who may prefer to stock up their quota at the time of harvest, when prices are low and, thus, would not need to buy when prices rise. If farmers decide to retain produce for later, prices may not go up or the private sector may not enter the market to purchase.

The second policy change was the Essential Commodities (Amendment) Bill, 2020, to remove commodities like pulses, oilseeds, edible oils, onion and potatoes from the list of essential commodities.

This also benefits private players because as long as these items are essential commodities, it is the government’s responsibility to ensure their supply. How successful these steps will be in creating a buffer stock and curbing price surge will only be clear in the years to come.

This was first published in Down To Earth’s print edition (dated 1-15 September, 2021)