A bridge too far-fetched 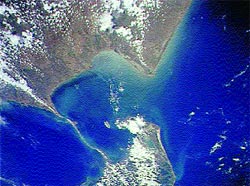 Non-resident Indian websites caused ripples when they claimed that a 30-kilometre-long bridge of shoals, across the Palk Strait between India and Sri Lanka whose images were captured by the National Aeronautic and Space Administration (nasa), bore an uncanny resemblance to a structure described in the epic Ramayana.

The us agency has, however, put a damper on the episode revealing that the so-called mysterious ancient bridge was nothing more than a naturally occurring chain of sandbanks. nasa has been taking pictures of the structure, also known as Adam's bridge, for years. This gives the lie to a suggestion made in the report that the unique curvature and composition of the bridge shows it is made by humans.

"Remote sensing images from orbit cannot provide direct information about the origin or age of a chain of islands, and certainly not determine whether humans were involved in producing any of the patterns seen," states nasa official Mark Hess.