Consumption: peaking to a fall 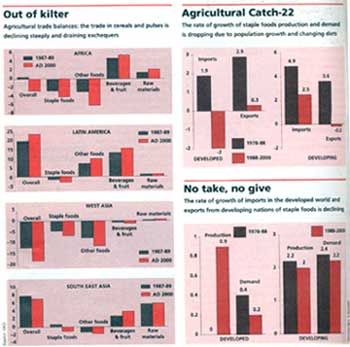 Farmers in the developing world are in for tough times ahead. A 1994 Food and Agricultural Organization publication titled Medium- Term Prospects for Agricultural Commodities warns that the rate of trade growth for food and agricultural commodities during the '90s is likely to be less than half the rate of growth of the previous decade. The decelerators seem to be growing popUlation and changing con~~mption patterns in the developed world.

The consequences will be particularly dire for developing countries. Most of the developing world relies upon agricUltural trade for a substantial part of their export earnings and, although these will rise in real terms,population growth will mean that rea! per capita export earnings will fall. This trend is most disturbingly evident in the declining staple foods trade -cereals, roots and tubers -of the developing countries, whipped mainly by falling demand for these crops in the developed world.