Turmeric, or haldi, holds an important place in Indian kitchens because of its strong aroma, healing properties

Correction: The story first published on May 1, 2020 said farmers produced 26,000 million tonnes of turmeric every year. It was supposed to be metric tonnes instead of million tonnes. The error has been rectified June 26, 2020 and is regretted.

More than 40,000 turmeric farmers in Odisha’s Kandhamal district are suffering huge losses from the economic downturn wrought by the nationwide lockdown to curb the novel coronavirus disease (COVID-19) pandemic.

Kandhamal is known for its indigenous variety of turmeric or haldi — a spice that holds an important place in Indian kitchens because of its strong aroma and healing properties as well.

Subash Pradhan of Phiringia village in the tribal-dominated district cultivated turmeric on her half-acre land six months back. She hoped to earn good money from the crop this harvest season, as she usually supplies her produce to local businessmen. The lockdown, however, has dashed her hopes to earn money from the crop.

The lockdown has made it tough for turmeric farmers to recoup the cost of cultivation, said Sambhari Digal, a resident of Raikia village, who also grows turmeric.

“COVID-19 is disastrous for haldi farmers and businessmen of the region,” she said, adding that she along with the rest of the farmers would earlier supply turmeric to Cuttack, Bhubaneswar and several other towns and cities across the state.

“We are now in great distress,” said Ranjan Pradhan, a businessman from Daringbadi village, who deals in turmeric. Yuvraj Pradhan, another turmeric farmer, said the lockdown was important, but there was an urgent need to address the current problem. 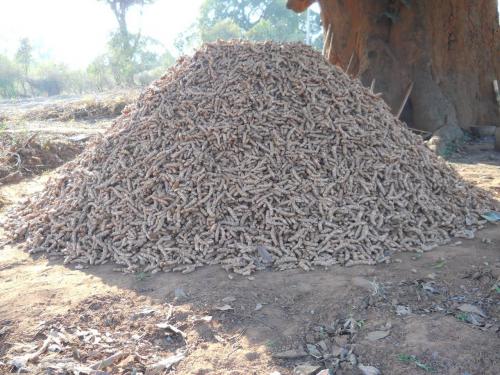 Unique properties in Kandhamal haldi give it a strong aroma and a higher medicinal value Photo: Ashis Senapati

The farmers produce around 26,000 metric tonnes of turmeric in 13,000 hectares of land every year in the district, that has the correct conditions — including humidity and temperature — for growing the crop.

The farmers harvest their crops in March and April every year.

“We will open all mandis and regional marketing societies in Kandhamal soon to help turmeric farmers sell their products,” he said, adding that the crop will also be sold through the National Agriculture Market (eNAM).

Kandhamal Apex Spices Association for Marketing (KASAM) — registered society involved in processing, value addition and marketing of spices and other product — has helped turmeric farmers in the district for a long time.

KASAM, in 2018, applied for a geographical indication tag (GI tag) — given for products that have unique qualities, reputation or characteristics that can be attributed to its geographic origin —  for Kandhamal haldi, the local name for the variety of turmeric produced in the district. It earned the tag in April 1, 2019, from Intellectual Property India, an organisation that comes under the Union Ministry of Commerce and Industry

Kandhamal haldi — that has more oleo resin and volatile oil content compared to other turmeric varieties — was put under Class-30 type. The unique properties in Kandhamal haldi give it a strong aroma and a higher medicinal value.

Turmeric is usually purchased by KASAM from 12,000 farmers who are the members of 60 cooperative societies, said Sanjit Patnaik, its secretary. Farmers received a bumper crop this time, said Patnaik, adding that it was a reliable and lucrative business.

Kandhamal haldi is popular in foreign countries and 95 per cent of KASAM’s procurement is exported to the US, Europe, Australia, Japan and Korea, according to Patnaik. “But the lockdown has forced exporters to not purchase turmeric, because of which we are now in deep trouble,” he added.