They held a cattle grazing drive to show they won’t give grazing rights on the land, which the upper castes claim is theirs 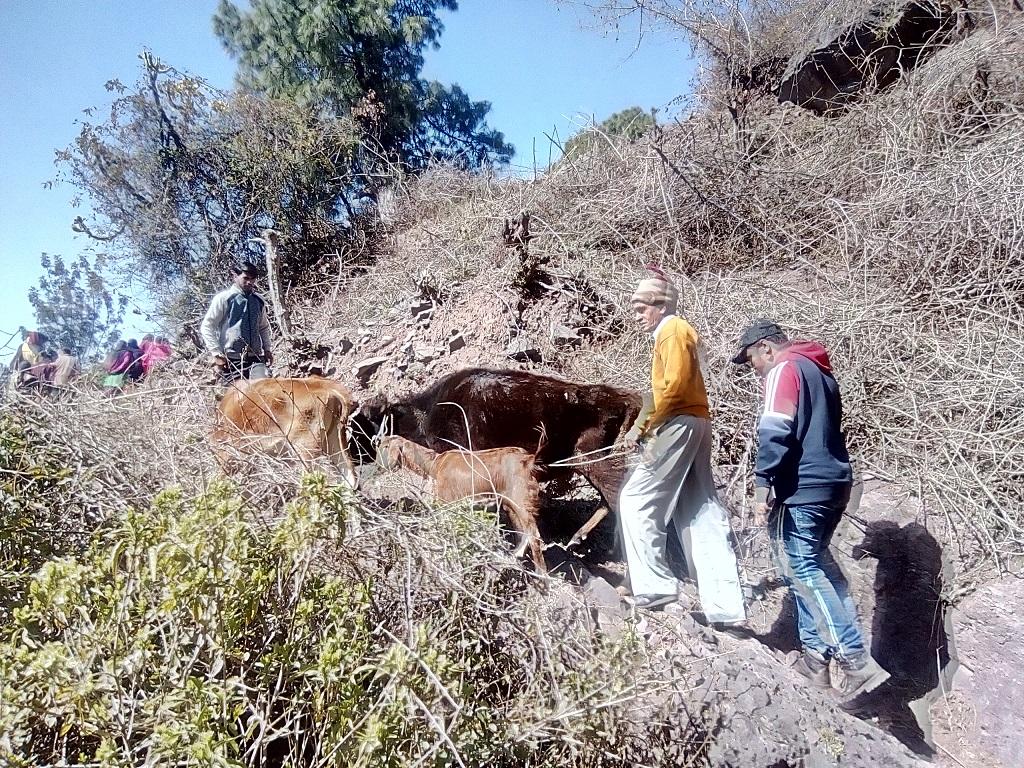 Farmers from Chaubecha village in Rori Panchayat of Kasauli take their animals for grazing to a nearby common land as part of the drive on February 24, 2019. Photo: Rajeev Khanna

After four women were allegedly attacked for taking their cattle to graze on common land at a village near Kasauli in Himachal Pradesh, Dalit farmers on February 24, 2019 held a Pashu Charao Abhiyan (cattle grazing drive) on land being claimed by those from upper castes.

The drive in Chaubecha village under Rori panchayat was organised to convey that farmers would not give up their rights on grazing land and that those from upper castes should furnish legal documents to establish ownership.

“We do not want to create any discord on caste or any other lines. We just want has easy access to common resources for all villagers,” Pyare Lal Verma, a Kisan Sabha leader who helped farmers organise the protest, said.

On January 25, 2019, Sushma Devi and her two daughters were allegedly attacked by seven upper-caste persons while they were taking their cattle to the common land. Hema Devi, a family elder, was also attacked when she tried to save them. A sustained campaign by Dalits and some activists led to the arrest of the accused.

“It is a question of our livelihood and we cannot forgo our rights. The only way forward is to unite and claim what is rightfully ours,” Hema Devi said at a meeting on February 11 when farmers called for the drive.

Apart from grazing land, a school has also become a contentious issue. Villagers say the upgrading of the school, on common land, is pending for four years as those from upper castes have obtained a court stay order on construction. Some activists, however, claimed there was no stay order and villagers have been misled by some panchayat members.

Villagers now plan to approach the Solan district administration and state education minister Suresh Bharadwaj to finish construction of the incomplete school building, the only government high school located on the 19-kilometre Dharampur-Subathu stretch. Many students, especially girls have dropped out because of the delay.

“This is not just the story of Chaubecha. This has become a common feature in many villages where the marginalised are denied right to common pathways, grazing land, water resources and even cremation grounds,” Rajeev Kaundal, a social activist, said at a meeting.

The village common lands in Himachal Pradesh are under the state government, the forest department and the village panchayats.

State’s lone CPM MLA and Kisan Sabha leader Rakesh Singha had recently said Himachal now has only 11.86 per cent or 5,43,356 hectares of land fit for agriculture. “The availability of grazing land that stood at 40.5 per cent in 1970-71 has now come down to 33 per cent,” he said.

This shows the increased pressure on these lands and how precious they have become for farmers to address the need of fodder.

Experts point out that there are several reasons for shrinking of these lands. “A large portion of these lands has been handed over to industries and other private institutions. Also, as the families get fragmented into nuclear units in the villages there is further pressure on common land available,” says ND Ranaut, who has been studying the issue of land distribution quite closely.

Ranaut explains that failure of industries in expanding base in the state has led to this increasing pressure. While the pressure on primary sector has increased, the income generation in this sector has decreased leading to an economic crisis.

He added that the non-cultivable land has also been increasing owing to the menace of wild animals.

“Things have changed very fast and for the worse. I have always been proud of the fact that I could move freely in Himachal but such threats from the economically and socially powerful people now make me scared even if I want to return to my own house at an odd time,” pointed Bhupinder Singh, a truck driver who hails from the village.

What happened in Chaubecha on Sunday is a small development that reflects the long-term ramifications that could surface in the days to come unless the government intervenes.