A section of farmers said that an unknown disease has made potatoes unfit for consumption, adding to losses 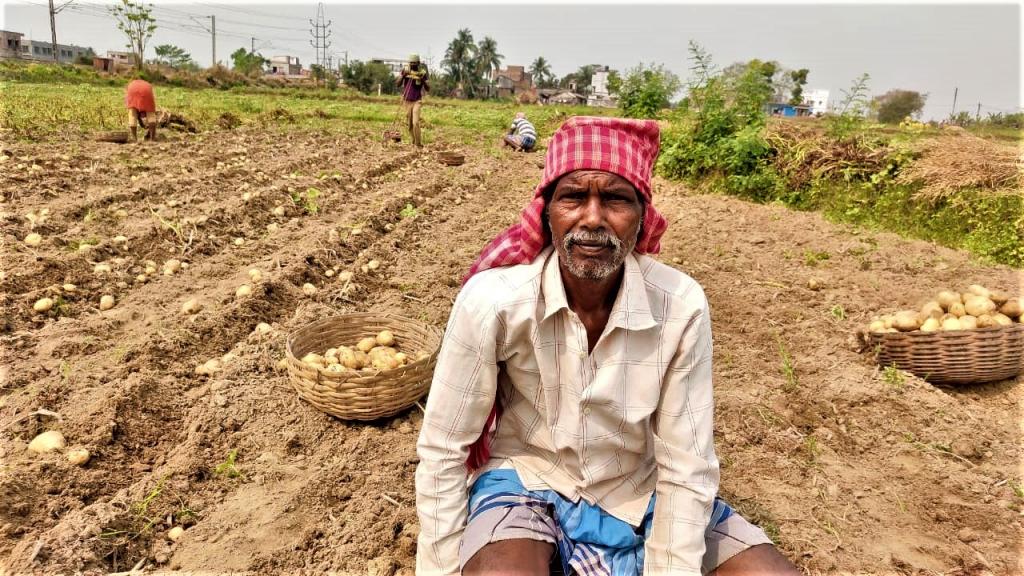 Jayant Soren, 60, a potato cultivator in Hooghly district, said they have spent over Rs 30,000 per bigha on this year's production. Photo: Gurvinder Singh

Potato cultivators in West Bengal were afraid they will face severe losses as the price of good quality seeds have skyrocketed even as the minimum support price (MSP) fixed has remained relatively low.

“We will lose our homes if the selling price of potatoes is not increased,” said Jayanta Soren, a 60-year-old potato cultivator from Hooghly district, known for its potatoes. Soren has been growing potato for over two decades on his two bigha (0.26 hectares) land at Maliya village, around 40 kilometres from Kolkata, the state capital.

He claimed to have never been more financially strained than the current season: “The profits which we made last year is already gone,” he shared, adding that thousands of small and marginal potato farmers like him have been pushed to the verge of severe losses and heavy debts.

West Bengal is a major potato-growing states of India. The farmers in the state mainly grow Jyoti, Chandramukhi and hybrid varieties like Super S1, Super 6 and Pokhraj.

The retail price of potatoes in Kolkata was Rs 10 per kilogram (kg) for Jyoti, the most common variety grown and procured, and Rs 15-16 per kg for Chandramukhi.

In February this year, the state government fixed the MSP of potatoes (Jyoti variety) at Rs 300 for a bag (50 kg), which translated to Rs 6 per kg.

This was done to prevent the distress sale of produce like last year when initially farmers didn’t get a good price for the potatoes and then suddenly prices skyrocketed to Rs 1,400-1,500 per bag.

But potato cultivators are unsure how they are going to even cover the production cost at this selling price.

Cultivators in Bengal prefer seeds from Punjab because they are disease-free and offer better yield. The price of these seeds has increased to Rs 5,000-5,200 for each bag from Rs 3,000 last year, shared Manik Choudhary, 43, another farmer in Maliya village.

He explained the math:

“We need at least three bags of seeds for one bigha. This means, we will be spending Rs 15,000 on seeds alone. There are also other expenses like fertilisers, medicines, labour, rent for supplying water to the fields, and transportation expenses to warehouse.”

The yield is not more than 75-80 bags per bigha, shared Sk Ashraf Ali, another potato cultivator in the village.

But the farmers have spent Rs 30,000-32,000 per bigha for growing potatos this year, said Soren. “It is clear there will be severe losses.”

Ali said they have requested the government to hike the MSP to ensure they are able to at least break even. “But nothing has been done yet.”

A section of the farmers also claimed that an unknown disease has attacked their produce and increased losses. “We are finding a disease in potatoes which is making them unfit for consumption. It destroyed half of my production,” rued Ajit Ruidas, 60, a cultivator from Baganbati village.

Farmers claimed that they were able to purchase the high-priced seeds with the massive profits made last year. “The price of potatoes had risen drastically last year which brought us good profits. The price of the seeds and fertilisers were also comparatively lower,” said Bishnu Das, 52, a potato farmer in neighbouring Baganbati village in Hooghly district.

Last year, the state produced 10 million tonnes of potatoes and the volume is expected to swell to 12 million tonnes in this year due to favourable climatic conditions, said agriculture experts.

Not keen to sell

Around 400,000 acres of land is under potato cultivation in Bengal and an estimated 10 lakh farmers are engaged in the farming from December to March.

All these cultivators have demanded that MSP be raised to at least Rs 700 per bag for them to recover costs and see profits.

“Apart from production, we also have to bear the cost of logistics. Labourers charge Rs 250 per day and 10 labourers have to be employed during sowing and harvesting. We are doing most of the work ourselves to minimise cost,” said Ali.

The warehouse operators, who charge a one-time fee of Rs 85 per bag, have observed that farmers are not very keen to sell produce because of low price. “They are waiting for the price to rise as it happened last year,” said Tapas Ghosh, staff at SN Cold Storage in Hooghly district.

“Moreover, the harvest is still ongoing in various other states. The demand for Bengal’s produce might swell if production is low in other states. Farmers would wait at least for a month before selling the produce.”

Agriculture experts working closely with the state government, however, dismissed claims of likely losses to be faced by the farmers.

“The MSP of Rs 6 per kg is a break-even price. But farmers are selling at Rs 9 per kg directly to buyers so there is no way that they can suffer losses,” Said Pradeep Mazumdar, agriculture advisor to the state government.

He, however, conceded that the rising cost of seeds has been a concern for farmers. He added:

“We have repeatedly asked them to get united against the escalating cost in order to put pressure on the Punjab seed traders. But most of them bypass and buy the seeds even at higher price.”

The government is developing indigenous seeds which would not only be priced less but would also be of higher quality, he shared. The move will help farmers reduce dependency on seed varieties from Punjab and enhance profits, the senior official said.