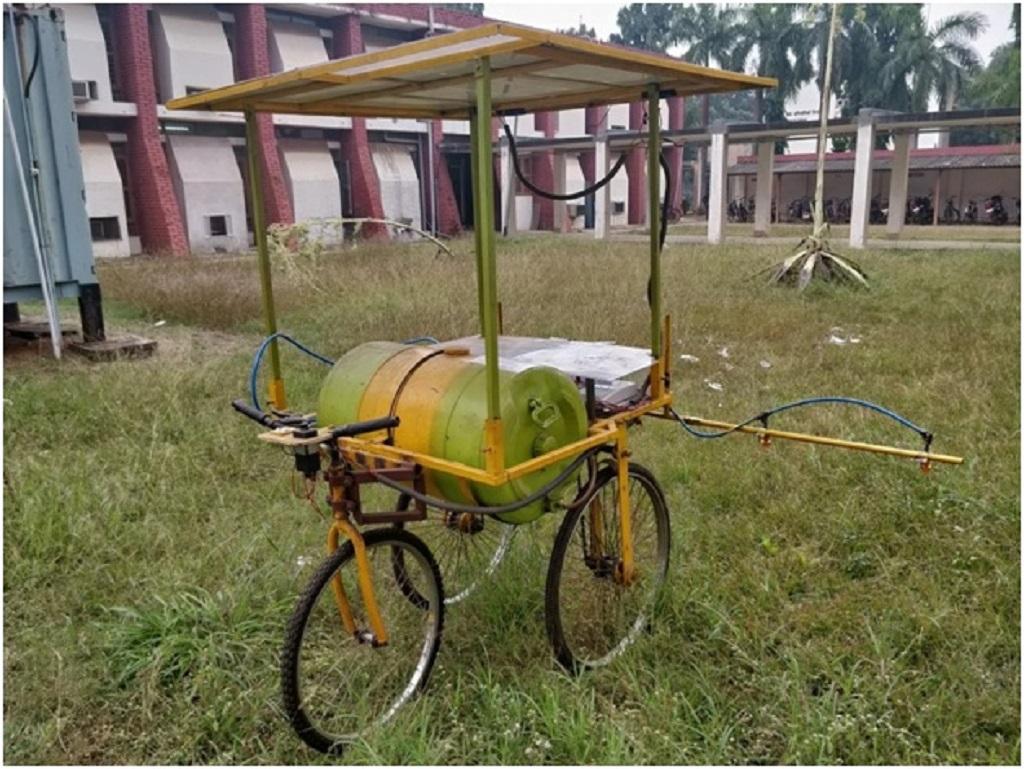 Scientists from IIT Kharagpur have developed a mobile pest-control device that runs on solar power. The semi-automated device will reduce the labour of farmers who have to manually spray pesticides or use fossil-fuel based machines for the same. The innovation, meant mostly for small and marginal farmers, will also ensure pesticides are not wasted and the distribution is uniform.

Prevention of pests during different growth stages of crops is important to increase yield. But the process is labour and time-intensive. In smaller tracts of lands, the farmers usually use knapsack sprayers in which the cultivator has to carry the entire volume of pesticide on their back while moving around the field to spray.

“This impacts the efficiency of spraying as it depends on the skill of the operator leading to non-uniformity in spraying,” the scientists said in a statement to the press.

The device resembles a vegetable cart with three wheels and a roof of solar panels. The main system consists of a propelling unit fitted with a liquid storage tank and a DC motor-operated pump to pressure the liquid to be sprayed, the press note described.

Multiple numbers of spray nozzles are mounted on a boom fitted to the front of the machine. An operator is required to control the movement of the spraying unit.

“It can be easily operated in the field using solar energy with a maximum speed of two kilometres per hour, and can cover a width of 1.5 metres at a time with a field efficiency of 81 per cent, thus saving time, human involvement and chemicals,” remarked Hifjur Raheman, a professor in the department of agriculture, food engineering at the university and a member of the team that created the device.

Raheman conceptualised and designed the product with Anup Behera Rahul K and PBS Bhadoria from the department. They have filed a patent for the sprayer and it is ready for commercialisation.

About 82 per cent of the country’s farming community is categorised as small or marginal, according to Food and Agriculture Organization. These farmers have less than two hectares of land, according to the Union Ministry of Agriculture & Farmers Welfare.

With the view to improve the condition of such farmers and to double their income by 2022, the government is focusing on technological innovations, read the institute’s press statement. “This is an open call to the technical institutions in India to deliver in the field of precision agricultural technologies. In the IIT system, IIT Kharagpur has the sole distinction of having an agricultural and food engineering department. Hence it is our foremost responsibility to answer this call," remarked Virendra K Tewari, director, IIT Kharagpur.