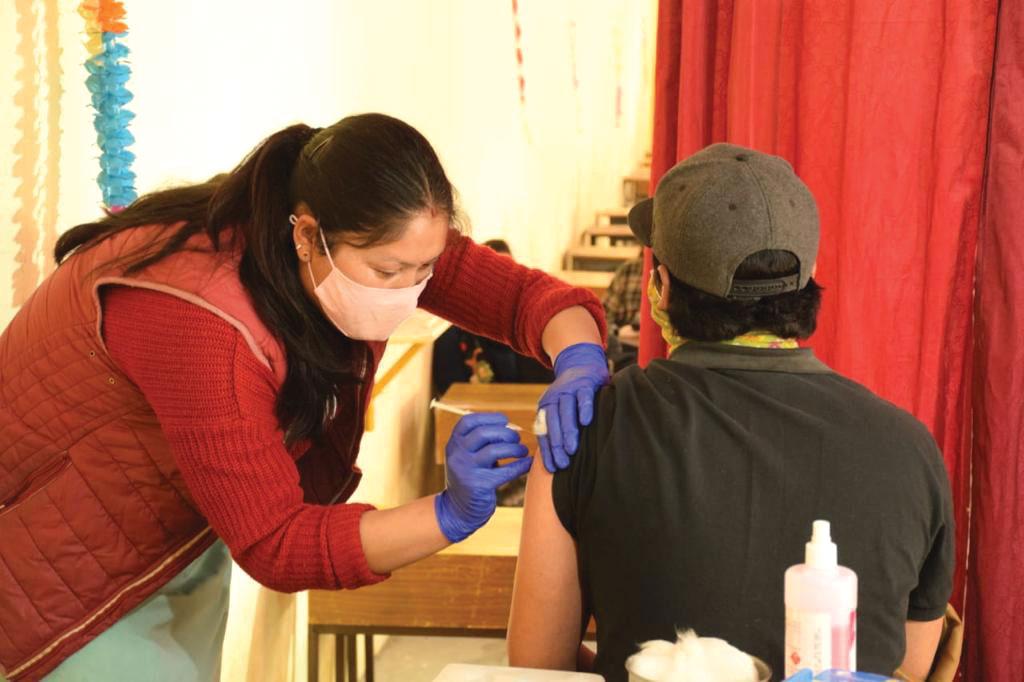 Online registration has made vaccination a challenge for people in Lahaul and Spiti where phones or access to telecommunication is difficult (Photograph: Rohit Prashar)

For almost six months a year, the tribal communities of Lahaul and Spiti valley remain isolated behind the Rohtang Pass as it gets covered with thick snow. Last year, their isolation was longer. After being shut for almost a year because of the novel coronavirus disease (COVID-19) pandemic, the cold desert mountain valley was all set to welcome tourists in February this year.

The Spiti Tourism Society, travel agents, hoteliers and community leaders were jubilant because the recently inaugurated 9 kilometres Atal tunnel, built to bypass the Rohtang Pass, had brought the high-altitude tribal valley closer to the rest the world and opened up new business opportunities for the residents.

The district administration also set up guidelines to be followed by tourists visiting the valley. But the district, which had not reported a single COVID-19-related death and only a handful of new cases since December 2020, soon witnessed a sharp surge in numbers. On May 6, the administration imposed a curfew and closed the valley for tourists. The restrictions were in place till the magazine went to press on May 31.

Sham Azad, a social worker from Lahaul, says most people from the valley, particularly from Spiti, migrate to the plains during the harsh winter months and start returning around March. The virus could have travelled with them to the valley.

“Since the district does not have a laboratory for testing, infections remain undiagnosed for days. The virus finds easy hosts as few in the valley adhere to COVID-19 protocols, like wearing mask and maintaining social distancing,” said Sushil, acting president of the Young Drukpa Association Garsha, a non-profit engaged in welfare activities in the valley during the pandemic. 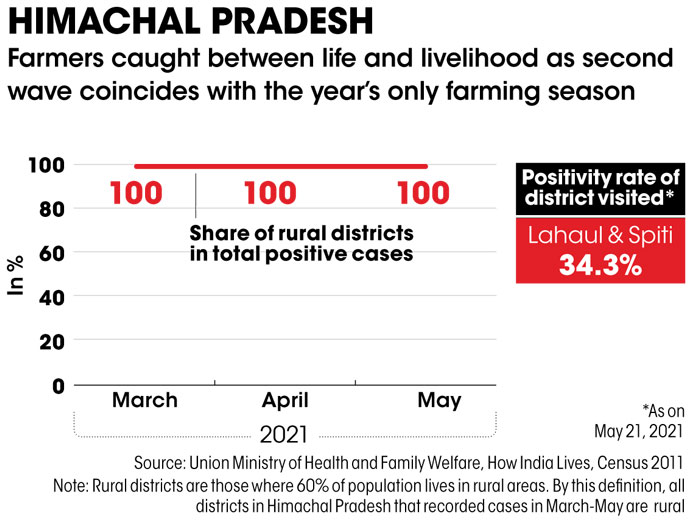 Ranjit Vaidya, chief medical officer, Lahaul and Spiti, offered another reason the virus has had a field day in the valley in the past two months. As soon as snow starts thawing in mid-April, the cold deserts become flush with vegetables, particularly with exotic ones like broccoli, lettuce, celery and coloured capsicum.

Since farming work in the district is in full swing, some people avoid getting tested due to fear of losing work, Vikram said, adding that earnings from these crops are vital for people as the region’s inhospitable climate allows only one cropping season.

Vaccination, which needs registration on the Cowin portal, remained a challenge as people in the valley either do not have phones or access to telecommuni-cation. The administration has demanded some changes in the Cowin portal for vaccination; 80 per cent of the people will be vaccinated offline and only 20 per cent of the youth will be vaccinated through the online portal.

The district administration has formed a Rapid Action Team for random sampling in every village. Those found COVID-positive with mild symptoms are advised home isolation and are given an isolation guide, paracetamol, sanitiser, multi-vitamins, calcium, zinc, and vitamin C on behalf of the administration.

Those in need of oxygen are being admitted to hospitals. Since the district lacks surgeons, specialist doctors and modern health facilities, the district admini-stration plans to airlift serious patients. On May 22, a kit distributed to patients by the chief minister, however, included a mask, thermometer, chyawanprash and some ayurvedic medicine.