The desert locusts have spread in at least 40 of Madhya Pradesh’s 55 districts — nearly a week after they entered the state in end-May 2020. They invaded some parts of Chhattisgarh’s Koriya district as well on May 31, creating a scare among local authorities, according to officials.

The Food and Agricultural Organisation had warned of their eastward spread owing to strong winds in the wake of Cyclone Amphan.

He added that the farmers there sowed moong, a summer crop, which was under threat from locust attack.

“We employed four fire brigade vehicles and sprayers mounted on tractors. We spray insecticides such as Lambda-cyhalothrin in the wee hours. There has been no damage to crops in our district,” he added.

Rewa district was affected by a five-kilometre-long swarm and adjoining districts such as Satna and Panna were put on high alert. Swarms are still active in Morena, Balaghat, Betul, Niwari, Shivpuri, Raisen, Tikamgarh and Bhopal. State agriculture department claimed they destroyed 40 per cent of their population by spraying chemical insecticides.

For effective control of locusts beyond scheduled desert areas, temporary control camps have been established in Mandsaur, Ujjain and Shivpuri. Fire brigades for pesticide spray, hand-held spray equipment and tractor-mounted sprayers have been deployed for effective locust control.

The desert locusts had last visited the Indian state three decades ago; they usually live in the bordering areas of Rajasthan and adjoining areas in Pakistan.

So what triggered their movement?

Excess rainfall in northwest and central India helped them breed and reproduce. Rainfall in Pakistan and Afghanistan aided growth and movement into India. Such intense pre-monsoon activity is quite unusual and the moisture seems to have been generated from westerly disturbances — storms that carry moisture in the upper atmosphere all the way from the Atlantic and the Mediterranean.

This year they have been warmer than normal, which may have allowed them to carry more moisture.

Second, the winds flowing from the northwestern direction towards southeast and east brought the locusts in Madhya Pradesh and some districts of Uttar Pradesh, Maharashtra and Chhattisgarh.

The north westerly winds were established in the aftermath of super Cyclone Amphan that hit the West Bengal coast on May 20.

It is evident from the wind data analysis in six north Indian cities conducted by International Water Management Institute that there was a sharp increase in the wind speed at 10 metres above the ground from mid-May onwards, which helped the locust move from Rajasthan to Madhya Pradesh, Uttar Pradesh and Maharashtra.

While most Rabi crops had been harvested by April-end, some were remaining. Natural vegetation had also grown owing to good rainfall. This may spell trouble for farmers, especially if the locust swarms continue to increase in number and density with the monsoon being normal this year.

The following maps show the areas where crops were sown in the months of March, April and May, 2020. They were captured using Google Earth engine mapping vegetation area. 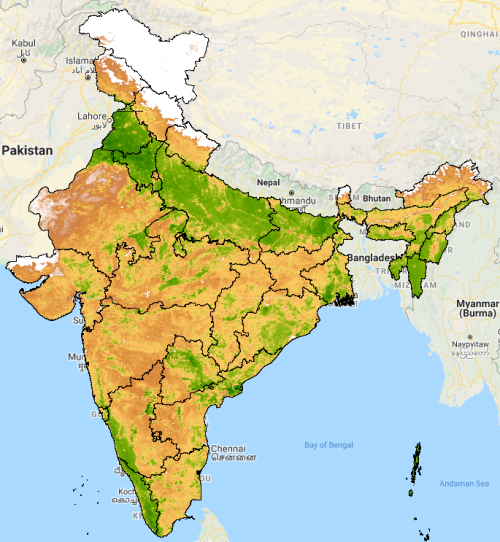 Areas where crops were sown for March, 2020 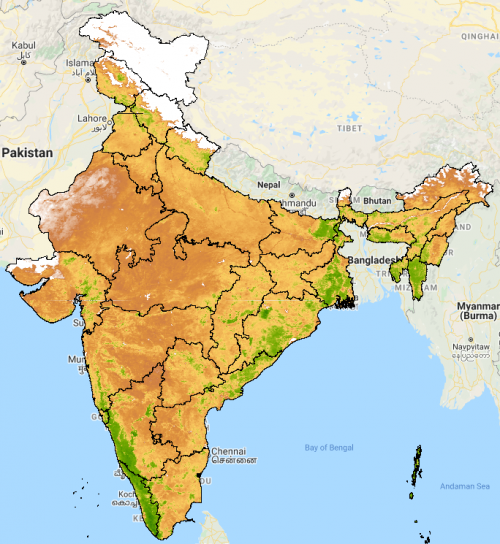 Areas where crops were sown for April, 2020 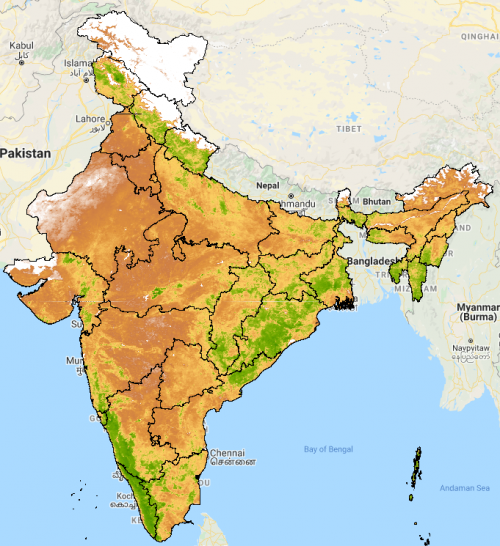 Areas where crops were sown for May, 2020

Amid locust invasion and the novel coronavirus pandemic fears, MP has one more worry — a strong possibility of heavy rainfall and flooding due to Cyclone Nisarga. The cyclone, formed in the afternoon of June 2, is likely to make a landfall in the morning of June 3 near Alibaug, south of Mumbai, as a severe cyclone with wind speeds of 100-110 kilometre/hour, according to the India Meteorological Department.

From there one, it is expected to decrease in intensity but move further inland towards interior Maharashtra and MP as a depression. This could cause heavy rainfall in both states.

With inputs from Manish Mishra