India in danger zone as locusts breed 400 times than usual

Attacks by desert locusts are threatening India, Iran and Pakistan, as well as the Horn of Africa and the Red Sea region

Desert locusts are multiplying at 400 times than usual due to favourable climatic conditions. Photo: Wikimedia Commons

Desert locusts are breeding 400 times than usual due to favourable climatic conditions, according to a report by the Food and Agricultural Organization (FAO). This explosive multiplication may spell disaster for large parts of Asia and Africa.

Favourable climatic conditions for the pests have resulted in their multiplication, that is 400 times more than usual.

Already 38,308 hectares in 22 out of 33 districts of Rajasthan are under locust attack, according to the state government. They have reached as far as Madhya Pradesh and Uttar Pradesh, after entering from Pakistan in April

The current outbreak is affecting India, Iran and Pakistan, as well as the Horn of Africa and the Red Sea regions. The Food and Agriculture Organization (FAO) has categorised countries affected by locust attack in three regions:

The locusts move from the western region to the central and then to the eastern, as their population increases. 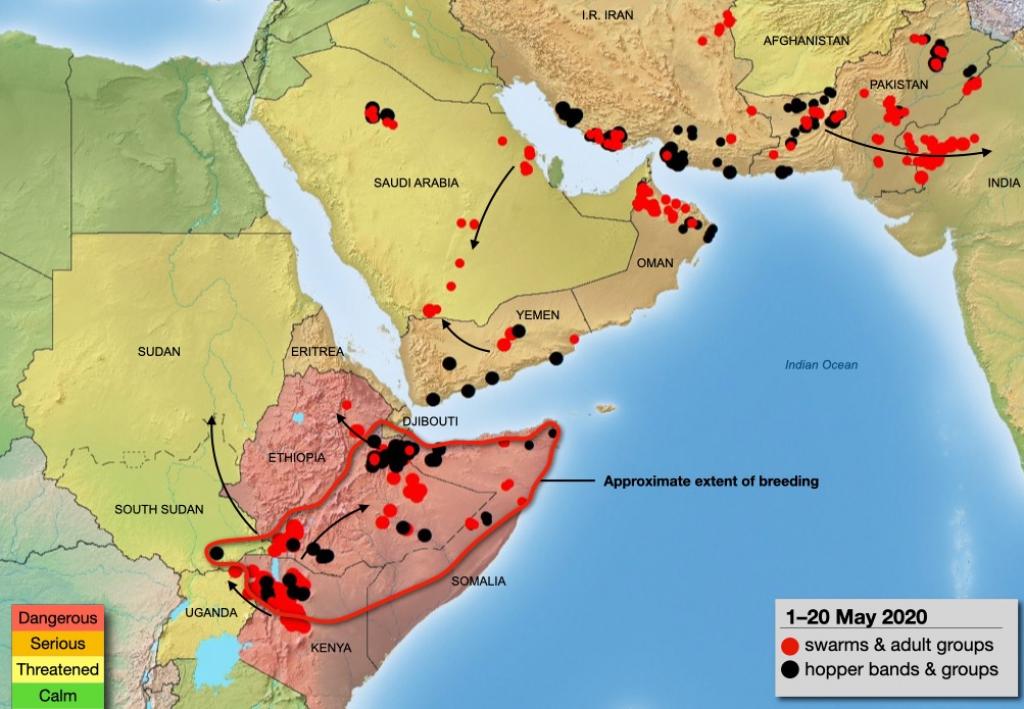 The FAO's locust update between May 1-20. Source: FAO

“The current situation — an upsurge with the potential to become a regional plague — represents an unprecedented threat to food security and livelihoods in the region and could lead to further suffering, displacement and potential conflict,” the FAO report said.

Heavy rainfall in the central and eastern region in counties like Yemen, Djibouti, Ethiopia, Kenya, Iran, Afghanistan have helped in the breeding of the locusts.

“It is rare for locusts to reach all the way to Madhya Pradesh and Uttar Pradesh where they can find green areas to feed on. This will have a huge impact on food security,” Govind Gujar, a research scientist with South Asia Biotechnology Centre (SABC), a Delhi-based non-profit working on agriculture and science, said.

“The female locust lays eggs in mostly sandy soil. If temperature is high and there is no rainfall, the breeding isn’t successful,” Gujar said.

“Spring breeding continues in southern Iran and southwest Pakistan where control operations are in progress against hopper groups and bands as well as an increasing number of adult groups,” the FAO’s Desert Locust Situation latest update on May 21, 2020, said.

“As vegetation dries out, more groups and swarms will form and move from these areas to the summer breeding areas along both sides of the India-Pakistan border as several waves from now until at least early July,” it added. 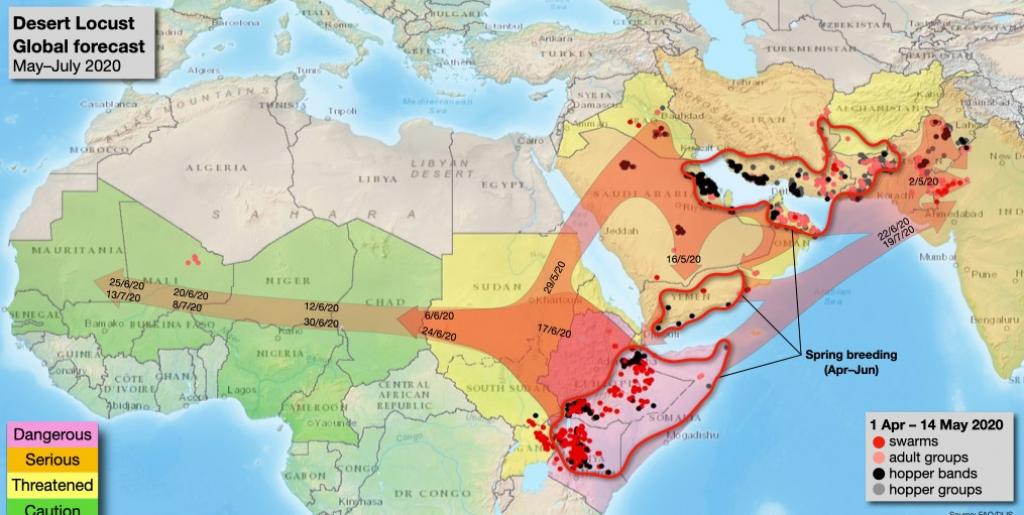 The FAO's forecast for desert locusts till July. Photo: FAO

“Good rains are predicted during the first half of June along the India-Pakistan border that would allow egg-laying to occur. This should reduce the further eastward movement of swarms that have already arrived in Rajasthan, India,” it noted.

Experts say that usually only one swarm crosses over to India from Pakistan, but this time, multiple swarms have come.

“Unlike earlier, multiple swarms have come and that is a reason that many regions have been subsequently affected,” a scientist with the Central Arid Zone Research Institute told Down to Earth on condition of anonymity.