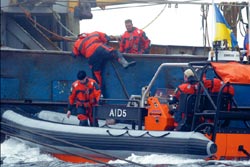 two diametrically opposite views have emerged after the recently concluded negotiations of the Agriculture and Fisheries Council of the European Union (eu). While uk fisherfolk are opposing new cuts in North Sea cod fishing quotas imposed by the eu, environmental groups have criticised the commission for not imposing a complete ban. The latter view assumes importance in view of scientists' observation that cod stocks in northern eu waters are at their lowest levels ever.

The meet saw cod fishing quotas being cut by 45 per cent and restrictions being imposed on cod fishing in the North Sea for 15 days per month during 2003. In other words, fisherfolk can still catch 22,659 tonnes of cod.

The move has been criticised by fishing communities in the uk and also by environmentalists -- albeit for different reasons. The fisherfolk, who net 50 per cent of the total North Sea cod, claim that the 45 per cent cut could destroy the Scottish fishing industry, threatening 20,000 jobs. But, uk fisheries minister Elliot Morley says that the government is looking to help the industry. He hopes the agreement will kickstart fish stock recovery.

Countries such as the uk were instrumental in watering down the European Commission's initial proposal of an 80 per cent cut in cod quotas and restriction of seven days. The final agreement falls drastically short of a complete ban recommended by the International Council for the Exploration of the Sea, on whose advice the commission drew up its proposal.

For this reason, the decision has not found favour with environmentalists. The World Wide Fund for Nature, which had also called for a total moratorium on cod fishing, believes the final agreement was "the death sentence for cod in the North Sea".

eu commissioner Franz Fischler stated that the new agreement would come into effect from February 1, 2003, as a "transitional measure".