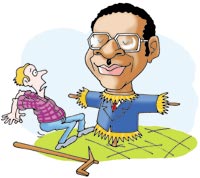 The Zimbabwean government intends to nationalise all farmland -- a step that may hasten the collapse of agriculture in the country. The government has forced nine-tenths of the 4,500 white commercial farmers off their lands in the past four years. Consequently, the farm output has fallen so drastically that last year nearly two-thirds of Zimbabwe's 12 million people relied on food aid.

"This is not in the best interests of Zimbabweans, black or white," said John Worsley-Worswick, director of pressure group Justice for Agriculture. The activist body believes that land reform should be concurrent with the rule of law. "What the country needs is individual titles to land for black and white farmers alike. That will encourage productive farming. Individual ownership will empower all Zimbabweans. State ownership empowers a dictator," added Worsley-Worswick.

Although President Robert Mugabe says seized land is for poor black Zimbabweans, most of the best farms have been grabbed by cabinet ministers, army officers and others connected to his party, Zanu-pf. "With wholesale nationalisation, Zimbabwe is following in the footsteps of Zambia, Mozambique and Angola," said an agricultural specialist, adding: "Those countries have all seen agriculture decline, causing suffering to the average person. That is what will happen in Zimbabwe."