For the first time, more than 200 farmers in Palkot, Kamdara and Basia blocks of the district went the green way and cultivated watermelons through motor pumps run on solar energy.

Sunita Barla, a farmer from Kamdara’s Arhara village, said she cultivated watermelon on five acres. Diesel pump sets were expensive and for irrigating one acre, 10 litres of diesel had to be used, she added.

“The solar pump is switched on at 8 am. We get to use it till the sun sets,” she said.

Inter-state supply was hampered due to the novel coronavirus disease (COVID-19) lockdown and produce could not be sent to Rourkela in Odisha or Ambikapur in Chhattisgarh.

“Consumption, too, has plummeted. Big markets in Ranchi are shut,” Rao said. He pointed to dwindling earnings, but added that the solar lift project helped farmers increase the yield.

Swarnima Ekka from Palkot’s Satkhari village cultivated watermelons on one acre. The yield was good, but selling the produce difficult, she said. Ekka managed to sell 2,500 kg of watermelons so far.

Sudhir Indwar from Marda village, on the other hand, has one acre of land and grew watermelons on 50 decimals. He pays Rs 20 per hour to use solar lift irrigation and finds it to be a great alternative to diesel.

Erratic rains in the past few days prevented ripening of watermelons, even though the yield per acre was a 20 tonnes, said Ankit Tandon who looks after team activities in Kamdara block.

The project was funded by the Bank of America Corp (BoA) and implemented by non-profit PRADAN.

The total cost of a solar lift structure was Rs 6 lakh, out of which the BoA contributed Rs 4.2 lakh; about Rs 1.8 lakh was contributed by the solar group for pipes, trench digging and labour. At least 220 farmers have benefitted from solar lift irrigation so far.

“We thought watermelons would give good returns in the month of Ramzan. But the lockdown disrupted supply. Several vendors informed us that they could not procure passes for movement. But of late, some merchants from Jamshedpur and Gumla are buying fruits at low rates. They are offering Rs 4-5 per kilogram instead of the Rs 7 per kg,” said P Chandrashekhar Rao from PRADAN, who is anchoring the solar lift project. 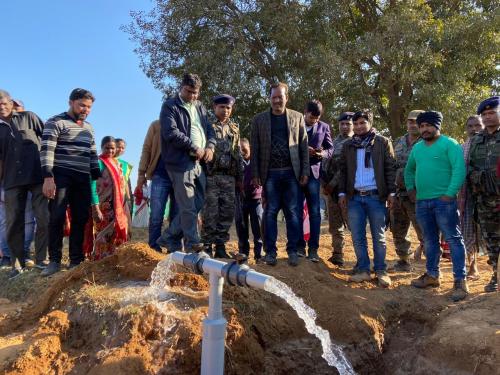 A solar pump used to irrigate watermelons in a Jharkhand village. Source: PRADAN

User groups were formed to facilitate solar energy coverage. One group comprised a minimum of 19 farmers. At least seven such groups are functional across the three blocks.

Kolkata-based Greenovera India Pvt Ltd, which provides services in renewable energy, helped with the installations. New pumps were distributed to farmers as part of the project.

Solar a way of life

PRADAN’s Palkot team works with 32,000 households in Gumla. In many areas, solar energy lit up villages that lacked electricity supply.

“Solar projects were functional in Gumla as well as Khunti district. We approached the Bank of America for solar lift irrigation and they sanctioned it. The main aim was value addition of poor tribal farmers. We sought permission from the gram sabhas. Nobody grew watermelons on such a large scale before us,” Tandon said.

The issue was first discussed with farmers, who would previously rely on water pumps run on expensive diesel.

The solar panels’ photovoltaic cells capture sun rays, convert it into electrical energy, which is then tapped using motor pumps. Farmers lift water from Torpa and Marda rivers in Palkot, the Koyel river in Kamdara and sometimes check dams. The plots are usually 500-600 metres away from the water sources.

An orientation meeting was held before watermelon cultivation idea was put forth. For supply of seeds, farmers were linked to a cooperative in Palkot, which provides technical services and low inputs, including best seeds, and mango and guava saplings. The farmers were also taken to Bokaro, Ranchi, Jamshedpur, Ambikapur and Rourkela to learn better about the process.