Paddy farmers save water, energy and money by adopting this farming approach, the study points out 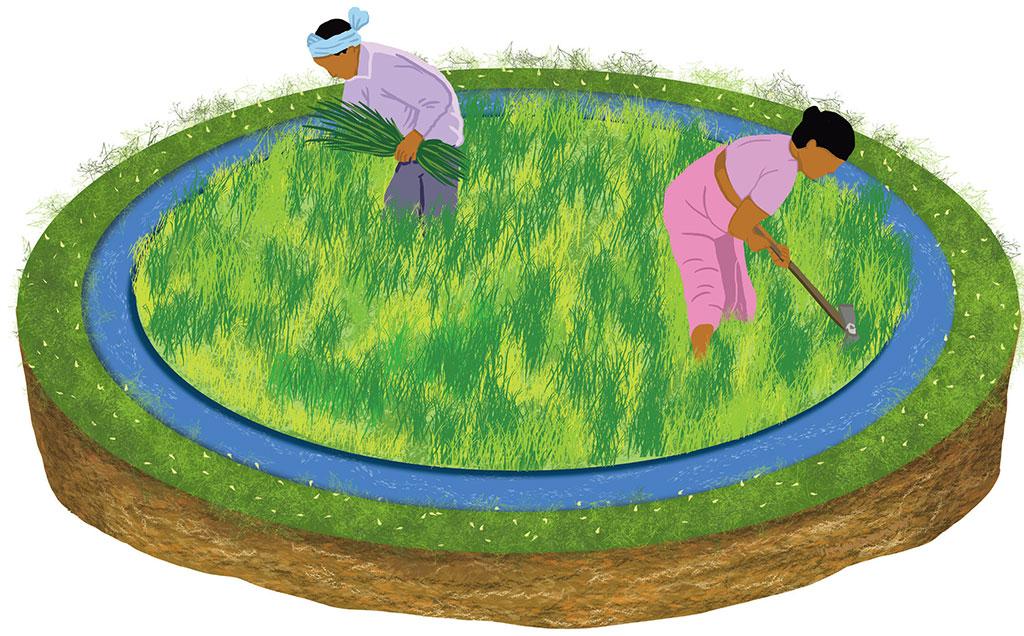 Agriculture is both the cause and victim of water scarcity. Excessive use of water threatened the sustainability of livelihoods dependent on water and agriculture, according to the Food and Agriculture Organization.

In India, the Green Revolution had a phenomenal impact on India’s food production, but it also rendered the land infertile, led to extensive water consumption and aggravated groundwater loss.

The country’s agriculture sector already consumed over 83 per cent of the available water resources, according to the Central Water Commission. And the demand will grow.

In the recent past, there was a global demand to shift to sustainable farming systems, such as zero-budget natural farming (ZBNF). India, too, introduced ZBNF in its Union Budget 2019-20.

As the name suggests, it is the adaptation of an ancient practice that reduces farmers’ direct cost and encourages them to use natural inputs, such as cow dung and cow urine. The inputs help manage soil nutrition, fertility, pests and seeds.

The technology requires less tilling and completely rejects the use of inorganic fertilisers, pesticides and herbicides. It is also water-efficient. Of late, all these benefits were popularised, but in 2019, a group of researchers tried to quantify it.

It found maximum benefits of ZBNF in paddy farming, with a saving of 1,400 to 3,500 cubic metres of water per acre per paddy cropping period (one acre equals 0.4 hectare).

This was accomplished by increasing the time interval of irrigation cycles — every eight to 10 days — unlike the conventional method that required watering every five to six days. Water saving was attributed to the multiple aeration practice. This water management method involves periodic aeration of the soil between watering periods.

Water consumption in paddy cultivation depended on the frequency and depth of irrigation. Paddy farms under ZBNF were irrigated with only 2.54-5.7 centimetres-deep water, while those under non-ZBNF were watered up to 12.7 cm.

Traditional flood irrigation was plagued with inconsistent spread of nutrients — with excess water use — something that can also drop crop productivity.

Although the study did not observe much impact on crop yield, multiple aeration and reduced water use showed other benefits. In just one crop season, electricity consumption of farms relying on groundwater reduced by 1,500-3,900 units per acre and saved Rs 6,000-16,000.

Further, multiple aeration hindered microbial activity and cut methane emissions by 88 per cent, compared to the conventional flooding practice. This led to an additional saving of fossil fuels used for electricity generation and emissions reduction.

Growing paddy can save water

The volume is equivalent to storage potential of 40 to 100 Tehri dams, one of India’s biggest dams located in Uttarakhand. Additionally, ZBNF can address several on-ground challenges, such as groundwater-stress, water disparity in canal water usage and overuse of resources (flooded irrigation).

In India, 70 per cent of the farms rely on groundwater, which depletes reserves. In water-stressed zones, tubewells have to be dug up to about 300 metres.

ZBNF can avoid the current drawing of groundwater by 50-60 per cent, ensure adequate groundwater reserve, improve water table and reduce financial and labour stress on farmers.

ZBNF does show water-saving potential and can address India’s food and security in the long run, but deep investigation is required to ascertain if it can be replicated in the various agro-climatic zones across the country.

As they say, Rome was not built in a day. Similarly, ZBNF requires time and policy support so that the government provides monetary help for it to be adopted in all states.

NS Suresh is a research scientist and Arjun Shanker is a research analyst at Bengaluru-based policy think-tank Center for Study of Science, Technology and Policy.