There is finally some good news for Delhi. According to the new Global Urban Ambient Air Pollution Database (update 2016) of the World Health Organization (WHO) released on May 12, Delhi has arrested and improved air quality since the last global database was published by the WHO in 2014. The annual average PM2.5 levels in Delhi have reduced by 20 per cent since 2013. The WHO has released data on levels of particulate matter in 3,000 urban areas in 103 countries highlighting that air pollution is responsible for more than 3 million premature deaths worldwide ever year.

It is however disturbing that the pollution levels in several other Indian cities have worsened. Cities like Gwalior, Allahabad, Patna and Raipur are more polluted than even Delhi. This indicates air pollution is now a national crisis and needs stringent nation-wide action.

Air pollution in Delhi is showing improvement, responding to action: The new WHO data base reports a 20 per cent drop in PM2.5 level in Delhi since 2014 (See Graph 1:  Trend in annual average level of PM 2.5 in Delhi).Theair pollution curve in Delhi has bent. However, the annual levels are still double the ambient air quality standards and that demands more stringent action to protect public health. The beginning of second phase of action in Delhi has stabilised the air pollution trend in Delhi. A much larger number of vehicles are meeting the Bharat Stage IV standards that were introduced for new vehicles in 2010. The Rajghat coal-based power plant has been shut down. The only other coal power plant in Badarpur is operating at 30 per cent of its capacity. The Supreme Court directives have imposed environment compensation charge on entry of each truck into Delhi and restricted entry of pre-2006 trucks. This has halved the number of trucks that contribute about 30 per cent of the transport sector pollution. There is also a greater push to control dieselisation by restraining diesel cars and taxis, and also for enforcement on waste burning and construction dust. All of these have prevented the pollution from getting worse.

If the latest data set from the Delhi Pollution Control Committee for the year 2015 is also considered then PM2.5 levels have further dropped. However, the levels are still double the Indian standards and several times higher than the WHO guidelines. There cannot be any room for complacency as the annual average levels are still double the standards and a lot more will have to be done to meet the clean air targets in Delhi.

Trend in annual average level of PM 2.5 in Delhi 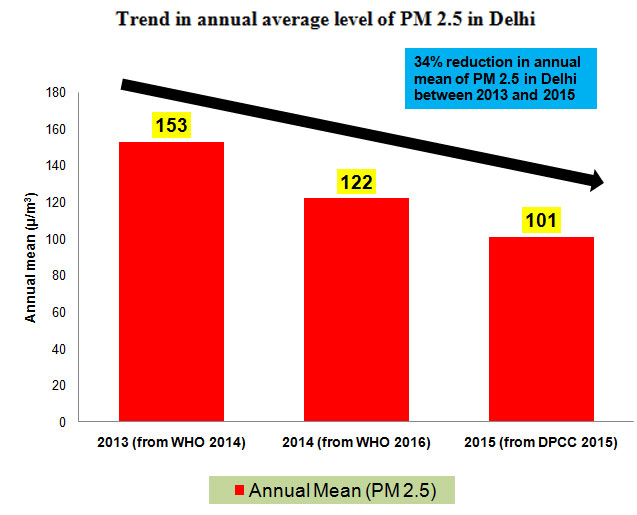 Bad news is that pollution levels are worse in several other Indian cities:

It is disturbing that several Indian cities—in fact smaller cities—have shown a substantial increase in pollution levels since 2014. PM2.5 in Allahabad has increased by 92 per cent; in Ludhiana 34 per cent; in Khanna 30 per cent; Kanpur 24 per cent; Agra 20 per cent; Lucknow 18 per cent, and Amritsar 17 per cent among others. (See Graph 4: Change in annual concentration of PM 2.5 in different Indian Cities between WHO 2014 data base and WHO 2016 database). This indicates that air pollution is a national crisis now. According to the Global Burden of Disease, air pollution is the fifth-largest killer in the country.

Change in annual concentration of PM 2.5 in different Indian Cities between WHO 2014 data base and WHO 2016 database 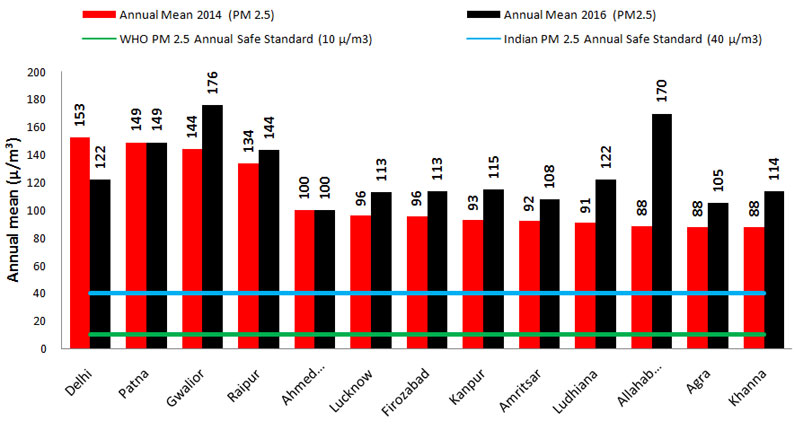 Globally, more cities even in advanced countries are showing up as not meeting the WHO guidelines for PM2.5: More than 80 per cent of people living in urban areas globally are exposed to air quality levels that exceed WHO limits. The WHO annual standards for PM2.5 are 10 micro grams per cubic metre. The numbers of cities that are not meeting the standards globally have increased over time.

The stunning revelation is that in many European countries, the numbers of cities not meeting WHO guidelines have increased quite substantially. In Austria, France, the Czech Republic, Germany, France, Italy and Poland, more than 70 per cent cities are violating the WHO guidelines for PM2.5.  In fact Austria, the Czech Republic, Italy, and Poland more than 90 per cent of their cities are not meeting the WHO guidelines for annual PM2.5 concentration. In 2014, only 80 cities in France were violating the WHO guidelines; but in 2016 database it has increased to a whopping 228 cities. Similarly, in Italy, 47 cities failed WHO standards in the 2014 data base; but that has increased to 212 cities in 2016. Clearly, there is a widespread reason for worsening of the trend across Europe. (See Table 1: List of countries by income failing WHO PM2.5 annual concentration standards).

The WHO should also release data on gaseous pollution to indicate how pollution challenge is changing in different regions of the world: The cities of the developing world that are still caught in low level of technology with poor combustions and have high influence of dust, still have very high level of particulate pollution. But advanced countries that have moved up the technology ladder have reduced particulate pollution significantly. But they are also facing newer challenges. Mix of pollutants and nature of health risks are changing setting new goals for mitigation. They are facing nitrogen oxide and ozone pollution. Recently, several European cities have reported violation of nitrogen oxide standards. The United Kingdom was dragged to the European Court of Justice for not meeting the NOx standards. The WHO should also capture the shifting nature of pollution challenge in different regions to help inform policies.

Next steps in India

Delhi has demonstrated that if cities take action to control pollution, it will show results. Strong public awareness, judicial and executive action has started to catalyse second phase of action in Delhi. But this will have to be taken forward to meet clean air targets quickly to protect public health. Delhi still has a long way to go.

But India urgently needs national air quality planning to ensure that all cities have a clean air action plan that are implemented in a time-bound manner to meet clean air targets. Presently, only cities that have seen more public awareness and sharp public opinion have succeeded in pushing action locally. But this demands stronger regulatory intervention nation-wide to enable action across India to save lives.